Mr Claude Marx, the new Director General of the CSSF, has been sworn in by the Minister of Finance today

Claude Marx was sworn in by the Minister of Finance Pierre Gramegna as new Director General of the Commission de Surveillance du Secteur Financier (CSSF). He will take office on 5 February and replace Jean Guill, who is retiring.

Claude Marx, 49 years, is a legal expert and comes from the private sector. Before joining the CSSF, he held various management positions in the financial sector, notably within HSBC Private Bank (Luxembourg) S.A. and Lombard International Assurance S.A..

He will be supported in his functions by three directors: Simone Delcourt and Claude Simon, who were reappointed, and Françoise Kauthen who replaces, since 22 January 2016, Andrée Billon, who retired as well. Françoise Kauthen is an economist and joined the CSSF in 1999 after working for the Société de la Bourse de Luxembourg.

A fifth director will be nominated in the course of the year.

The members of the Executive Board are appointed for a five-year term and the appointments are renewable.

Currently, the competences are distributed as follows: the General secretariat, the international affairs, the legal department and the public oversight of the audit profession fall under the remit of Claude Marx.

During the swearing-in ceremony, the Minister took the opportunity to thank Jean Guill and Andrée Billon for the significant work performed since they took office in 2009. He also pointed out the good relations and close cooperation between the members of the former Executive Board and expressed confidence that the new Executive Board will continue down this path. Pierre Gramegna wished Claude Marx good luck and underlined that he appreciated his decision to make the move from the private sector to the public sector.

The ceremony took place on the new premises of the CSSF in the presence of the persons in charge of the different departments. 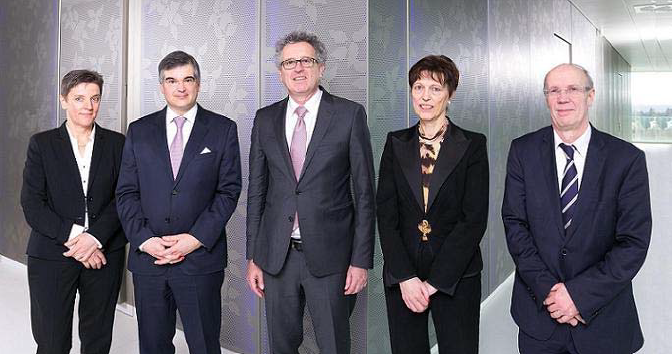 The Minister of Finance Pierre Gramegna and the Executive Board of the CSSF (from left to right):
Françoise Kauthen, Claude Marx, Simone Delcourt, Claude Simon 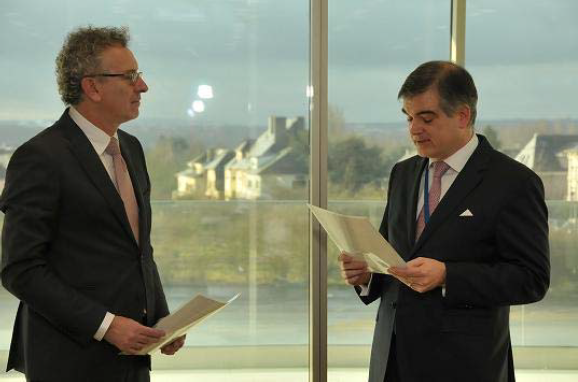 Claude Marx being sworn in by the Minister of Finance