The Luxembourg UCI industry registered a negative variation amounting to EUR 26.076 billion during the month of June. This decrease results from the positive net issues of EUR 1.047 billion (0.03%) combined with the negative development in financial markets amounting to EUR 27.123 billion (-0.78%). 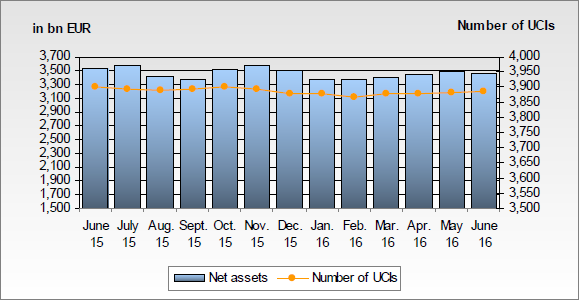 The number of undertakings for collective investment (UCIs) and specialised investment funds (SIFs) taken into consideration totalled 3,887 as against 3,882 in the previous month. A total of 2,577 entities have adopted an umbrella structure, which represents 12,898 sub-funds. When adding the 1,310 entities with a traditional structure to that figure, a total of 14,208 fund units are active in the financial centre.

As regards, on the one hand, the impact of financial markets on Luxembourg UCIs and SIFs (hereafter “UCIs”) and, on the other hand, the net capital investment in these UCIs, the following can be said about June 2016.

The British referendum and the unexpected result on the exit of Great Britain from the European Union heavily weighed on equity markets during the month under review although, ultimately, performance was heterogeneous from one region to another.

As far as developed countries are concerned, the European equity UCI category realised a strongly negative performance mainly due to substantial uncertainties in Europe regarding the result of the British referendum. This referendum had also an impact on American equity UCIs ending down slightly. The strong appreciation of the YEN associated with mixed economic indicators severely affected the Japanese equity UCI category, whereby stock market losses, however, were partly offset by the appreciation of the YEN against the EUR.

Development of equity UCIs during the month of June 2016*

Overall, bond yields from both sides of the Atlantic decreased significantly in June.

Uncertainties in Europe regarding the British referendum, the continuation of the expansive monetary policy of the European Central Bank (ECB) with the beginning of the expansion of the asset purchase programme to debt securities issued by non-financial corporations and the first round of targeted longer-term refinancing operations, overall backed the demand for EUR-denominated government and corporate bonds entailing an increase of EUR-denominated bond UCIs.

The bond UCI category of emerging countries developed positively in relation to the increase in commodity prices, the appreciation of certain emerging currencies as well as the unchanged key interest rates in the United States.

Development of fixed-income UCIs during the month of June 2016* 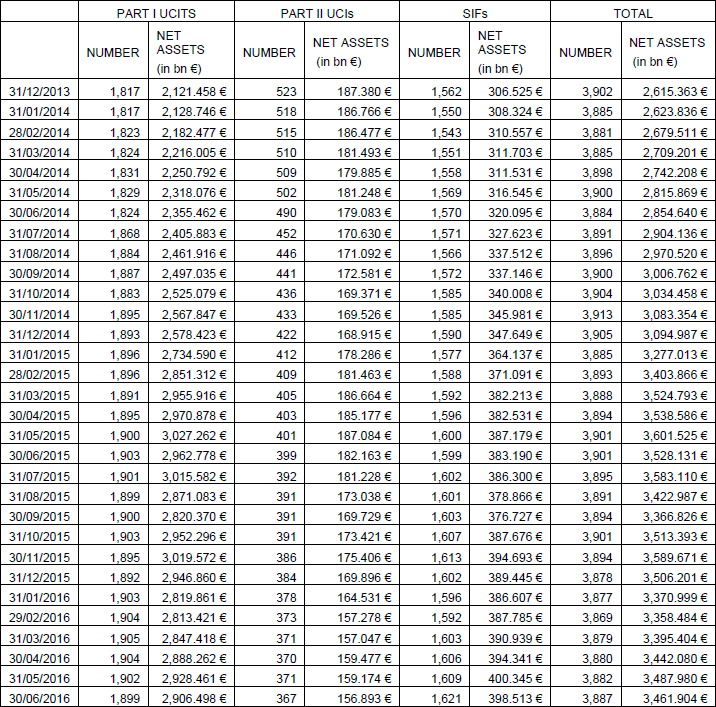 During the month of June, the following 24 undertakings for collective investment and specialised investment funds have been registered on the official list:

The following 19 undertakings for collective investment and specialised investment funds have been deregistered from the official list during the month of June: