The Luxembourg UCI industry thus registered a positive variation amounting to EUR 19.767 billion in September. This increase represents the balance of positive net issues of EUR 25.868 billion (0.72%) and of the negative development in the financial markets amounting to EUR 6.101 billion (-0.17%). 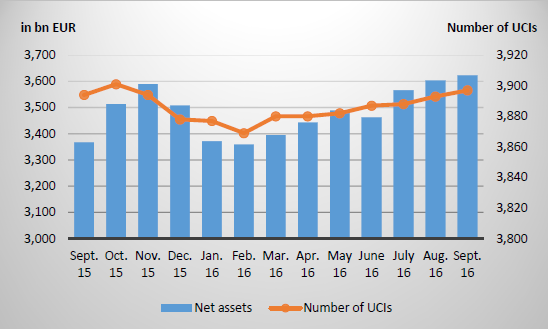 The number of undertakings for collective investment (UCIs) and specialised investment funds (SIFs) taken into consideration totalled 3,897 as against 3,893 in the previous month. 2,590 entities have adopted an umbrella structure, which represents 12,976 sub-funds. When adding the 1,307 entities with a traditional structure to that figure, a total of 14,283 fund units are active in the financial centre.

As regards, on the one hand, the impact of financial markets on Luxembourg UCIs and SIFs (hereafter “UCIs”) and, on the other hand, the net capital investment in these UCIs, the following can be said about September 2016.

As far as developed countries are concerned, the European equity UCI category registered a slight decrease due, in particular, to the absence of new accommodating monetary policy measures announced by the European Central Bank. US economic indicators below expectations as well as the Fed maintaining its key interest rates at the current level provide an explanation for the mild decline in the prices of US equity UCIs. Japanese equity UCIs improved while the decline of stock exchange prices as a result of the appreciation of the YEN and the new monetary policy guidelines taken by the Bank of Japan was largely offset by the appreciation of the YEN vs. EUR.

Concerning emerging countries, Asian equity UCIs recorded an overall positive performance, in particular, due to China’s economic data which continue to show a stabilisation of the Chinese economy. Eastern European equity UCIs ended the month positively mainly under the effect of stabilising oil prices entailing a slowing recession in Russia despite the lingering geopolitical issues in the region. The losses registered by the Latin American equity UCIs can be mainly explained by the depreciation of the main currencies of the region in a context of stagnating stock exchange prices.

Development of equity UCIs during the month of September 2016*

In Europe, government and private sector bond yields remained more or less stable in the context, in particular, of maintained monetary policy measures by the European Central Bank. Consequently, EUR-denominated bond UCIs varied only slightly in the month under review.

The maintenance of the key interest rates in the United States and the agreement signed between the OPEC countries on the oil production curb resulted in small gains for the emerging countries bond UCI category.

Development of fixed-income UCIs during the month of September 2016* 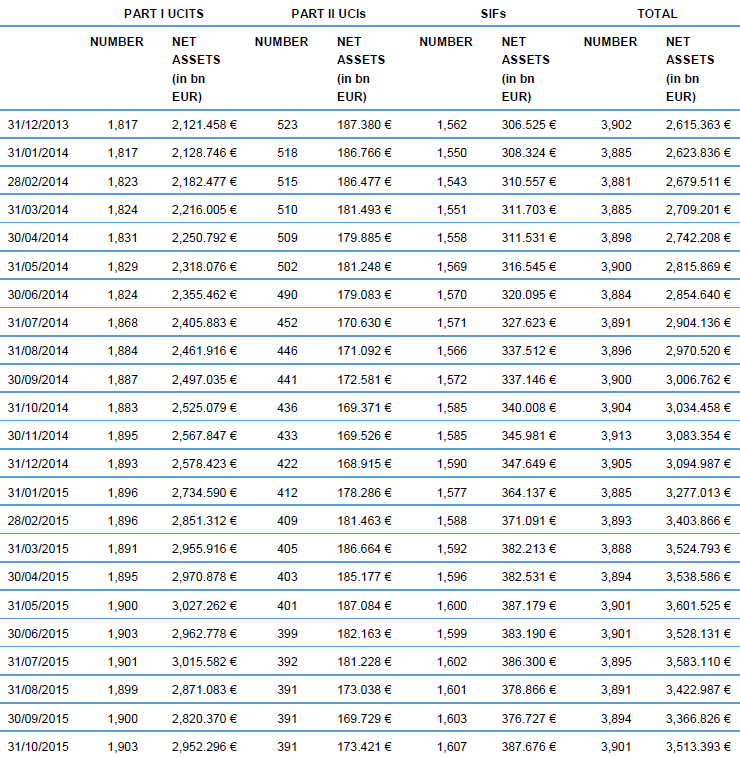 During the month under review, the following 19 undertakings for collective investment and specialised investment funds have been registered on the official list:

The following 15 undertakings for collective investment and specialised investment funds have been deregistered from the official list during the month under review: