Consequently, the Luxembourg UCI industry registered a positive variation amounting to EUR 4.569 billion in October. This increase represents the balance of positive net issues of EUR 7.012 billion (0.19%) and of the negative development in the financial markets amounting to EUR 2.443 billion (- 0.06%). 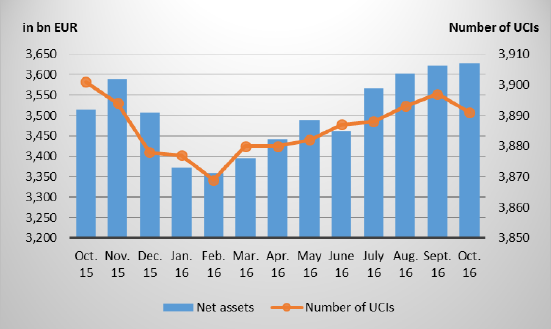 The number of undertakings for collective investment (UCIs) and specialised investment funds (SIFs) taken into consideration totalled 3,891 as against 3,897 in the previous month. 2,595 entities have adopted an umbrella structure, which represents 13,011 sub-funds. When adding the 1,296 entities with a traditional structure to that figure, a total of 14,307 fund units are active in the financial centre.

As regards, on the one hand, the impact of financial markets on Luxembourg UCIs and SIFs (hereafter “UCIs”) and, on the other hand, the net capital investment in these UCIs, the following can be said about October 2016.

As far as developed markets are concerned, given the political uncertainties in Europe, the category of European equity UCIs recorded a negative performance in October despite positive economic data in Europe. While equity markets in the United States closed the month in negative territory due mainly to the uncertainties surrounding the presidential elections, the category of US equity UCIs recorded nevertheless a slight increase following the USD appreciation against the EUR by almost 2%. The stock prices for the category of Japanese equity UCIs grew significantly during the month under review, mainly as a result of a depreciation of the YEN against the USD by over 4% and Japanese economic indicators that are better than expected.

As for emerging countries, the category of Asian equity UCIs recorded overall a positive performance following positive growth data and the upward trend of the economic indicators in China. The category of Eastern equity UCIs also registered price increases in October 2016 as a consequence of the deceleration of the Russian recession and the stabilisation of oil prices despite persisting geopolitical problems in the region. The strong appreciation of South American shares and main currencies against the EUR explains the positive performance of Latin American equity UCIs.

Development of equity UCIs during the month of October 2016*

In October, the bond yields recorded an upward trend on both sides of the Atlantic.

A high demand for emerging market bonds and the stabilisation of the commodity prices resulted in price increases for emerging bond UCIs.

Development of fixed-income UCIs during the month of October 2016* 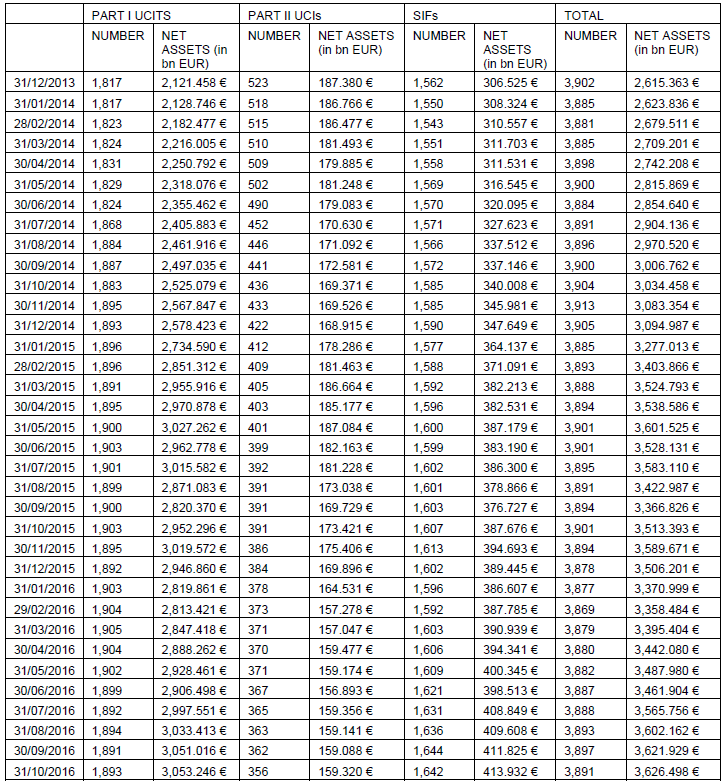 During the month under review, the following 21 undertakings for collective investment and specialised investment funds have been registered on the official list:

The following 27 undertakings for collective investment and specialised investment funds have been deregistered from the official list during the month under review: