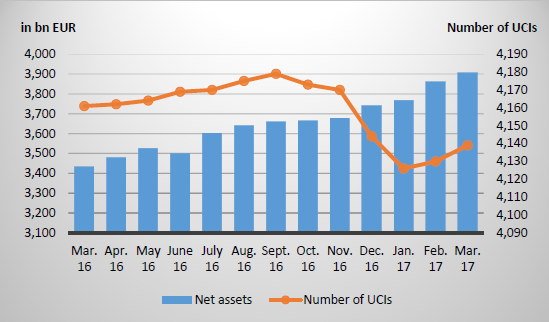 The number of undertakings for collective investment (UCIs) taken into consideration totals 4,139 as against 4,130 in the previous month. A total of 2,650 entities have adopted an umbrella structure, which represents 13,097 sub-funds. When adding the 1,489 entities with a traditional structure to that figure, a total of 14,586 fund units are active in the financial centre.

As far as developed countries are concerned, the European equity UCIs registered high price increases in a context of continuing economic recovery in the euro area, reduction of political risks in Europe and maintenance of the monetary policy accommodation by the European Central Bank. US equity experienced sideways movements in relation to uncertainties as to the implementation of the expansive tax measures announced by the president of the United States, while the USD vs. EUR depreciation made US equity UCIs finish the month negatively. In view of mixed economic indicators in Japan and the YEN vs. EUR depreciation, the Japanese equity UCIs recorded price decreases.

As far as emerging countries are concerned, the Asian equity UCI category ended with price increases notably in a context of an improvement in the global economic climate. A predominantly negative development of the stock markets of Eastern Europe countries was more than offset by the appreciation of the main currencies of this region against the EUR, so that the Eastern European equity UCIs appreciated. Against the background of widely divergent developments of the stock markets and currencies of various South American countries, the Latin American equity UCIs closed the month with a slight overall increase.

Development of equity UCIs during the month of March 2017*

In Europe, the favourable economic environment as well as the reduction of political risks brought the US government bond yields slightly up while, at the same time, yield differences among euro area countries decreased. Yields of corporate bonds followed that trend, entailing price decreases of EUR-denominated bond UCIs.

In the United States, the key interest rate rise by the US Federal Reserve as well as the positive economic data were counterbalanced by uncertainties surrounding the implementation of the stimulus measures planned by the president of the United States so that, all in all, the USD-denominated bond market showed little change. As a result of the USD vs. EUR depreciation, USD-denominated bond UCIs turned loss-making.

Development of fixed income UCIs during the month of March 2017*

During the month under review, the following 29 undertakings for collective investment have been registered on the official list:

The following 21 undertakings for collective investment have been deregistered from the official list during the month under review:

3 Undertaking for collective investment for which the designated management company was authorised by the competent authorities of another Member State in accordance with Directive 2009/65/EC.