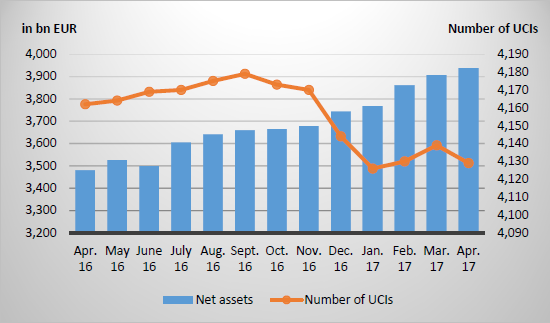 The number of undertakings for collective investment (UCIs) taken into consideration totals 4,129 as against 4,139 in the previous month. A total of 2,645 entities have adopted an umbrella structure, which represents 13,099 sub-funds. When adding the 1,484 entities with a traditional structure to that figure, a total of 14,583 fund units are active in the financial centre.

As far as developed countries are concerned, the European equity UCIs recorded price increases within the context of continued economic growth in the euro area, sound corporate results, ongoing accommodating monetary policy by the European Central Bank and a reduction of the political risks in Europe following the results of the first round of the French presidential elections. While US equity prices also increased due to results of corporates which exceeded expectations, US equity UCIs closed the month in negative territory against the USD vs. EUR depreciation. Despite the positive performance of the stock exchange in Japan linked to the recovery of foreign trade of Japan and positive economic indicators, Japanese equity UCIs recorded a fall in prices relating to the YEN vs. EUR depreciation.

As far as emerging countries are concerned, the Asian positive economic data and the favourable global economic context are attributable to the appreciation of Asian equity UCIs. Eastern European equity UCIs also developed positively, largely because of the positive evolution of the main stock exchanges and the improvement in the growth figures in Russia, whereas Latin American equity UCIs made a downward move due to the depreciation of the main currencies of the region.

Development of equity UCIs during the month of April 2017*

The continuity of the accommodative monetary policy by the European Central Bank in a context of decline in inflation and easing of political tensions in Europe resulted in a decrease in government and corporate bond yields, enabling EUR-denominated bond UCIs to end the month up.

An inflation below expectations, the delays in implementing the tax reform and a less positive than expected economic situation in the United States bolstered the US bond market where government bonds were particularly sought in a context of geopolitical uncertainties. However, consecutive price increases have been more than offset by the USD vs. EUR depreciation, so that USD-denominated bonds ended the month with a loss.

Development of fixed-income UCIs during the month of April 2017* 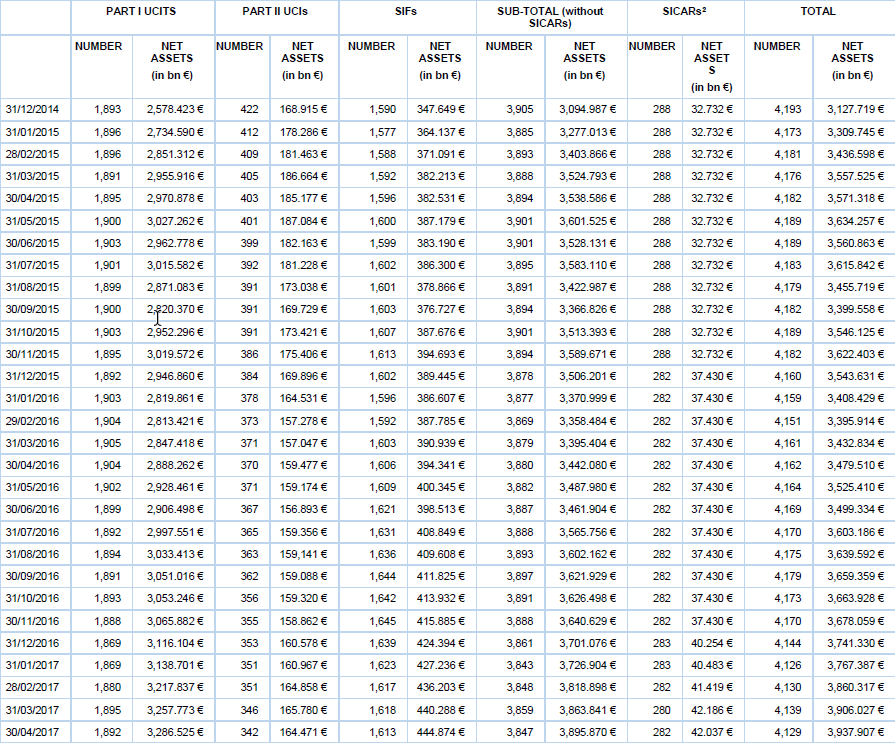 During the month under review, the following 29 undertakings for collective investment have been registered on the official list:

The following 21 undertakings for collective investment have been deregistered from the official list during the month under review: