Consequently, the Luxembourg UCI industry registered a positive variation amounting to EUR 29.747 billion in August. This increase represents the balance of positive net issues of EUR 33.298 billion (0.84%) and a negative development in financial markets amounting to EUR 3.551 billion (-0.09%). 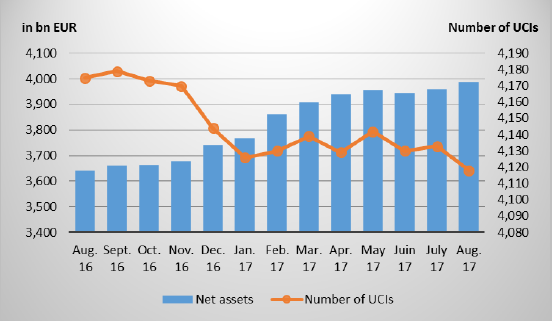 The number of undertakings for collective investment (UCIs) taken into consideration totals 4,118 as against 4,133 in the previous month. A total of 2,638 entities have adopted an umbrella structure, which represents 13,218 sub-funds. When adding the 1,480 entities with a traditional structure to that figure, a total of 14,698 fund units are active in the financial centre.

As regards, on the one hand, the impact of financial markets on the main categories of undertakings for collective investment and, on the other hand, the net capital investment within these UCIs, the following can be said about August.

As far as developed countries are concerned, August was marked, on the one hand, by geopolitical tensions related to North Korea and, on the other hand, by good economic news in Europe, the United States and Japan. In the light of the above and in view of the EUR appreciation against the main currencies which weighed on the markets, the category of European equity UCIs performed negatively. Although the American and Japanese equity prices remained more or less stable, the depreciation of USD and JPY against EUR caused the US and Japanese equity UCI categories to end the month in negative territory.

As regards emerging countries, all categories of equity UCIs improved despite the geopolitical tensions in relation to North Korea. The Asian equity UCI category registered price increases amidst stable economic data in China and an overall favourable economic environment. Russia’s and Brazil’s recovery from the recession and good economic figures in several other Eastern European and Latin American countries as well as the stabilisation of oil and primary commodity prices sustained the positive performance of the Eastern European and Latin American equity UCIs.

Development of equity UCIs during the month of August 2017*

In the United States, US government bond yields also decreased as a result of low inflation and the search by investors for safe-haven assets in the context of geopolitical tensions and uncertainties as regards US economic policy. Combined with the USD vs. EUR depreciation, the USD-denominated bond UCI category remained unchanged.

Development of fixed-income UCIs during the month of August 2017*

The following 25 undertakings for collective investment have been deregistered from the official list during the month under review:

2 Before 31 December 2016, the statistical data of SICARs were published on an annual basis only.

3 Undertaking for collective investment, the designated management company of which was authorised by the competent authorities of another Member State in accordance with Directive 2009/65/EC.