Consequently, the Luxembourg UCI industry registered a positive variation of EUR 78.634 billion in April. This increase represents the balance of positive net issues of EUR 26.702 billion (0.65%) and a positive development in financial markets amounting to EUR 51.932 billion (1.25%). 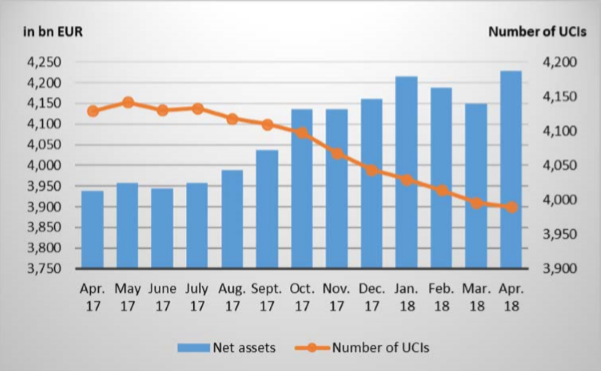 The number of undertakings for collective investment (UCIs) taken into consideration totalled 3,990 as against 3,996 in the previous month. A total of 2,581 entities adopted an umbrella structure, which represented 13,363 sub-funds. When adding the 1,409 entities with a traditional structure to that figure, a total of 14,772 fund units were active in the financial centre.

As regards developed countries, European equity UCIs realised a positive performance due to good economic fundamentals and the weakness of the EUR against the USD. While US equity prices barely moved amid trade tensions with China and sound corporate results in the United States, the appreciation of the USD against the EUR made the US equity UCIs end in positive territory. The increase of the Japanese equity UCIs was mainly sustained by an overall favourable economic environment and the depreciation of the YEN against the USD boosting the Japanese export.

As regards emerging countries, despite trade tensions between the United States and China, Asian equity UCIs registered a positive performance in the context of sound economic data in several countries of the region and the appreciation of the main Asian currencies against the EUR. The new economic sanctions imposed by the United States on Russia as well as political problems in Turkey resulted in losses for the category of Eastern European equity UCIs. Although Latin American equity markets declined, despite the increase of the main commodity prices, the appreciation of the USD against the EUR prompted the Latin American equity UCIs to end the month up.

Development of equity UCIs during the month of April 2018*

In view of an unchanged monetary policy of the European Central Bank in a context of low core inflation in Europe, the yields of government bonds and corporate bonds changed little during the month under review which explains the inertia of the EUR-denominated bond UCIs.

The USD-denominated bond yields increased due to a stable growth of the US economy, the upward revision of inflation anticipations and the monetary tightening by the Fed. This increase in yields which resulted in price losses of bonds was, however, more than offset by the appreciation of the USD against the EUR. Consequently, USD-denominated bond UCIs slightly appreciated.

The increase in the yields of US bonds, the trade tensions between the United States and China, the geopolitical problems in some emerging countries explain the price decreases of emerging market bond UCIs.

Development of fixed-income UCIs during the month of April 2018* 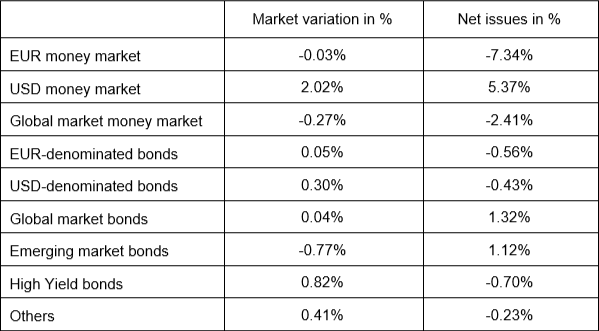 The following 20 undertakings for collective investment have been deregistered from the official list during the month under review: