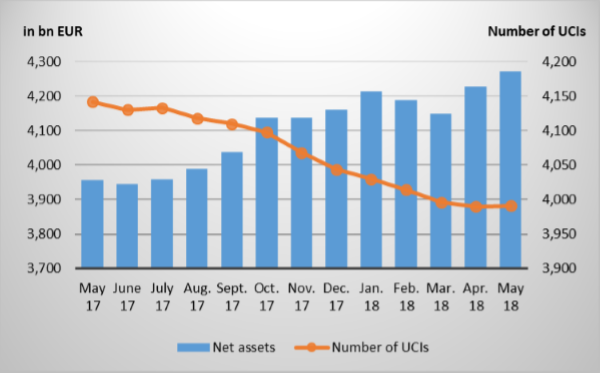 The number of undertakings for collective investment (UCIs) taken into consideration totalled 3,991 as against 3,990 in the previous month. A total of 2,582 entities adopted an umbrella structure, which represented 13,354 sub-funds. When adding the 1,409 entities with a traditional structure to that figure, a total of 14,763 fund units were active in the financial centre.

As regards developed countries, the European equity UCIs recorded a slight upward trend despite the resurgence of the political risk in the euro area. The publication of the results of undertakings which exceeded the expectations, stable economic indicators and the appreciation of the USD against the EUR explain the increase of US equity UCIs. Although Japanese equities registered price losses in the light of weak macroeconomic data, the appreciation of the YEN against the EUR led the category of Japanese equity UCIs to end in positive territory.

With respect to emerging countries, Asian equity UCIs showed a positive performance amid an overall positive economic environment, positive economic indicators in China and the appreciation of the main Asian currencies against the EUR despite divergent developments in several Asian countries and the ongoing trade tensions between China and the United States. The negative development of most of the equity markets in Eastern Europe explains the negative performance of the category of Eastern European equity UCIs. The category of Latin American equity UCIs experienced a sharp decline due notably to the persisting political and economic problems in Brazil and Mexico and the depreciation of the main South American currencies. In May, variable-yield UCI categories registered an overall negative net capital investment.

Development of equity UCIs during the month of May 2018*

The political uncertainties in Italy and the monetary policy normalisation process in Europe resulted in an increase of yields and in a new widening of the yield spread between the bonds of the euro area countries with high rating and those with lower rating. Consequently, EUR-denominated bond UCIs recorded price decreases.

The USD-denominated bond yields increased during the month under review due to the upward revision of inflation anticipations in a context of the rise in oil prices, good macroeconomic data and the ongoing monetary tightening by the Fed. This increase in yields which resulted in price losses of USD-denominated bonds was, however, more than offset by the appreciation of the USD against the EUR. Consequently, USD-denominated bond UCIs ended in positive territory.

The rise of the US bond yields, the monetary problems in some emerging countries as well as the persisting trade tensions with the United States led to higher risk premiums and consequently to a price drop of emerging market bond UCIs.

Development of fixed-income UCIs during the month of May 2018* 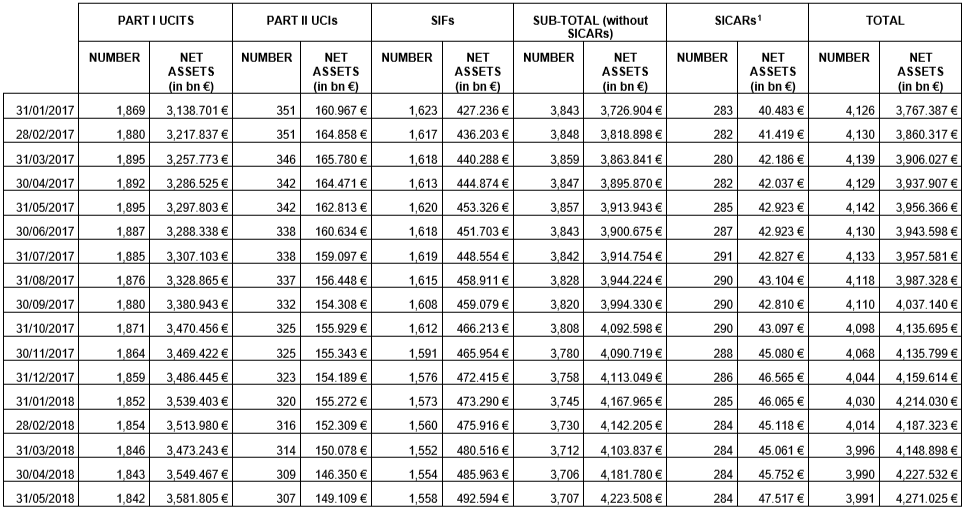 During the month under review, the following 15 undertakings for collective investment have been registered on the official list:

The following 14 undertakings for collective investment have been deregistered from the official list during the month under review: