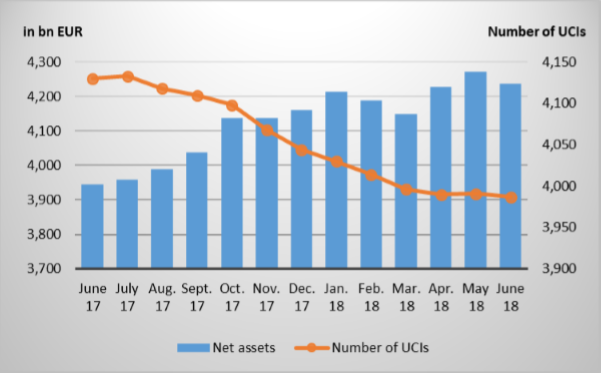 The number of undertakings for collective investment (UCIs) taken into consideration totalled 3,987 as against 3,991 in the previous month. A total of 2,581 entities adopted an umbrella structure, which represented 13,356 sub-funds. When adding the 1,406 entities with a traditional structure to that figure, a total of 14,762 fund units were active in the financial centre.

As regards, on the one hand, the impact of financial markets on the main categories of undertakings for collective investment and, on the other hand, the net capital investment in these UCIs, the following can be said about June.

The commercial tensions between the US and several other countries overshadowed the financial markets, resulting in falling prices for almost all equity UCI categories.

In developed countries, the European equity UCI categories thus fell at the end of June in negative territory. Japanese equity UCIs registered a negative impact accentuated by the depreciation of the JPY against the EUR. By contrast, the US equity UCI category recorded slight price increases despite these tensions, sustained by a positive economic development and the appreciation of the USD against the EUR.

As far as emerging markets are concerned, the uncertainties linked to the commercial tensions and the potential effects on global trade and growth implied a drop in the prices of all emerging market equity UCI categories, aggravated by the persisting economic and political issues in some of these emerging countries. The depreciation of the main emerging currencies further accentuated this declining trend.

Development of equity UCIs during the month of June 2018*

In Europe, the European bond UCI category remained rather unchanged during the month under review, considering the European Central Bank announcement to stop, as expected, its asset purchase programme at the end of 2018, whilst indicating that interest rates will probably remain at low levels until summer 2019 in a context of weak basis inflation rates.

As regards USD-denominated bond UCI categories, the continuing monetary tightening by the Fed, the positive economic figures and the anticipations of an inflation increase had an impact on the US bond prices. By contrast, US government bonds attracted investors looking for safe heavens in a context of commercial tensions between the US and several other countries. All in all, USD-denominated bond UCI categories ended the month down.

Development of fixed-income UCIs during the month of June 2018* 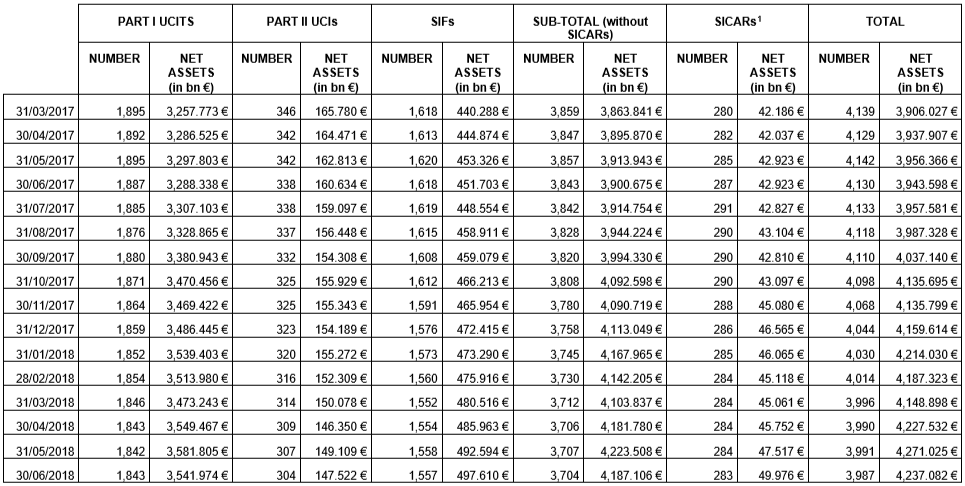 During the month under review, the following 18 undertakings for collective investment have been registered on the official list:

The following 22 undertakings for collective investment have been deregistered from the official list during the month under review: