The Luxembourg UCI industry thus registered a positive variation amounting to EUR 45.382 billion in July. This increase represents the sum of positive net issues of EUR 10.523 billion (0.25%) and of the positive development in the financial markets amounting to EUR 34.859 billion (0.82%). 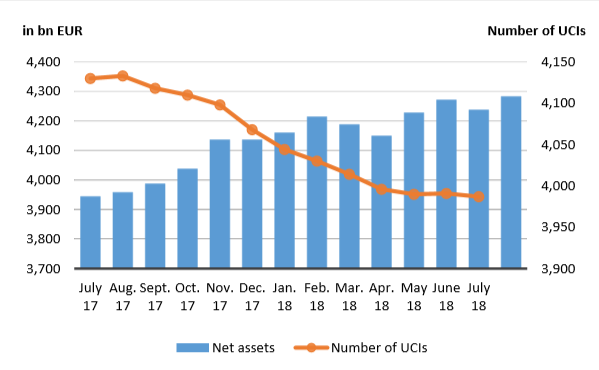 The number of undertakings for collective investment (UCIs) taken into consideration totalled 3,966 as against 3,987 in the previous month. A total of 2,573 entities adopted an umbrella structure, which represented 13,364 sub-funds. When adding the 1,393 entities with a traditional structure to that figure, a total of 14,757 fund units were active in the financial centre.

As regards, on the one hand, the impact of financial markets on the main categories of undertakings for collective investment and, on the other hand, the net capital investment in these UCIs, the following can be said about July.

As regards developed countries, the European equity UCIs realised a positive performance following the easing of the trade tensions between Europe and the United States, the stabilisation of the economic indicators and the sound results of the companies in Europe. The robust growth in the Unites States as well as corporate earnings exceeding anticipations resulted in the US equity UCIs ending the month up.  While the Japanese equity prices were sustained by an overall favourable economic environment, despite somewhat lower economic indicators for Japan, the depreciation of the YEN as compared to the EUR has offset these gains. As a result, there was little change in the Japanese equity UCIs.

As regards emerging countries, the trade tensions between the United States and China, the slight slower growth of the Asian countries, divergent developments of the equity markets in several countries of this region as well as the depreciation of the main Asian currencies against the EUR have weighted on the prices of Asian equity UCIs which performed poorly. Despite the political problems of certain Eastern European countries, the lull in the trade tensions between Europe and the United States resulted in the price increases of the Eastern European equity UCIs. This sharp rise in the prices of Latin American equity UCIs is the result of the strong market performance, mainly in Brazil and Mexico as well as a significant appreciation of the main South American currencies as compared to the EUR.

Development of equity UCIs during the month of July 2018*

In Europe and in the United States, the government bond yields slightly increased in relation, notably, to the easing of trade tensions between Europe and the United States and the positive economic figures in these two regions. In this context, the investors turned increasingly to corporate bonds with, as a consequence, a slight decrease in risk premiums in favour of these values.

The relaxation of the trade tensions between Europe and the United States, the economic and political measures started by China as well as the reduction of the risk premiums bolstered the increase of the prices of the emerging countries’ bond UCIs.

Development of fixed-income UCIs during the month of July 2018*

The following 35 undertakings for collective investment have been deregistered from the official list during the month under review: