The Luxembourg UCI industry thus registered a positive variation amounting to EUR 7.374 billion in September. This increase represents the balance of negative net issues of EUR 1,777 billion (-0.04%) and a positive development in the financial markets amounting to EUR 9.151 billion (0.21%). 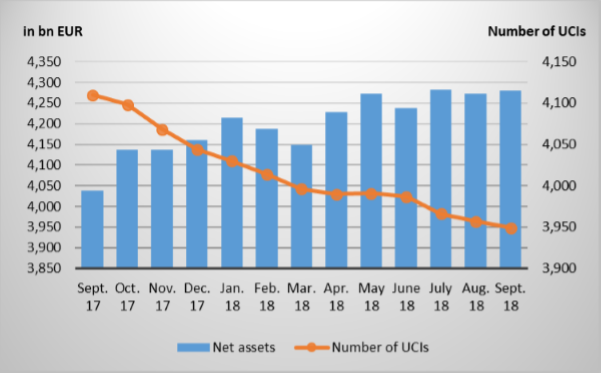 The number of undertakings for collective investment (UCIs) taken into consideration totalled 3,949 as against 3,957 in the previous month. A total of 2,567 entities adopted an umbrella structure, which represented 13,414 sub-funds. When adding the 1,382 entities with a traditional structure to that figure, a total of 14,796 fund units were active in the financial centre.

As regards developed countries, the category of European equity UCIs recorded a negative performance due, notably, to the ongoing trade tensions between the Unites States and China as well as the uncertainties related to the Italian budget and Brexit. The economic growth which is still solid in the United States continued to support the US equity UCIs which also benefitted from the appreciation of the USD against the EUR. In Japan, the equity markets ended the month with an increase amid an ongoing positive economic growth and a persistent depreciation of the YEN.

As regards emerging countries, the ongoing trade tensions between the United States and China as well as the divergent developments in different regions in Asia resulted in a negative development of the Asian equity UCIs. The stabilisation measures decided by Russia and Turkey as well as the rise of oil prices resulted in price increases for Eastern European equity UCIs. The finalisation of the new free trade agreement between Mexico, Canada and the United States, the increased support of the International Monetary Fund to Argentina as well as the appreciation of most South American currencies led to a rise in prices of South American equity UCIs.

Development of equity UCIs during the month of September 2018*

In Europe, the confirmation of the European Central Bank to end its asset-purchase programme at the end of 2018 together with the uncertainties related to the Italian budget resulted in an increase of yields of EUR-denominated government bonds. There were few changes in corporate bonds and the EUR-denominated bond UCI category recorded slight price losses.

In the United States, the rise of the key interest rates by the Fed, the increase of the inflation and the solid economic growth led to the expansion of government bond yields resulting in the decrease of bond prices. This movement was more than offset by the USD appreciation against the EUR so that the category of USD-denominated bond UCIs ended the month under review slightly up.

As regards emerging countries, the developments in Turkey and Argentina, the agreement negotiated between Mexico, Canada and the United States and the upward trend of oil prices contributed to the increase in the emerging country bond UCI category emphasised by the appreciation of many emerging currencies.

Development of fixed-income UCIs during the month of September 2018* 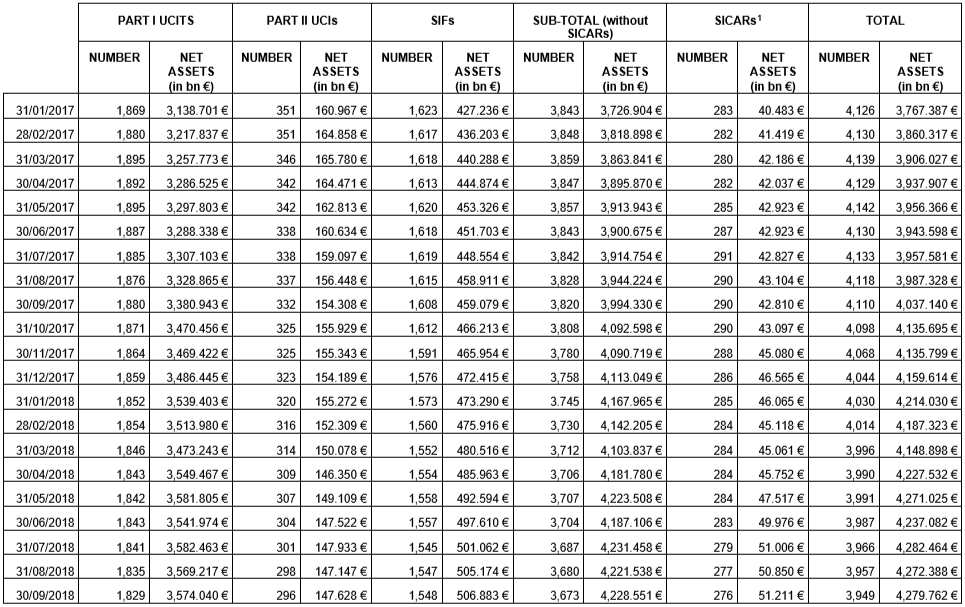 During the month under review, the following 8 undertakings for collective investment have been registered on the official list:

The following 16 undertakings for collective investment have been deregistered from the official list during the month under review:

2 Undertaking for collective investment for which the designated management company was authorised by the competent authorities of another Member State in accordance with Directive 2009/65/EC.