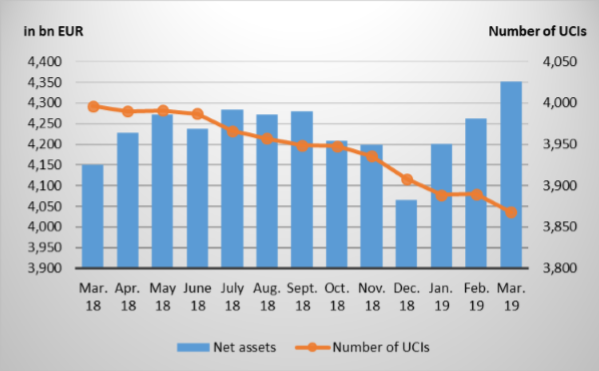 The number of undertakings for collective investment (UCIs) taken into consideration totalled 3,868 as against 3,890 in the previous month. A total of 2,513 entities adopted an umbrella structure, which represented 13,562 sub-funds. When adding the 1,355 entities with a traditional structure to that figure, a total of 14,917 fund units were active in the financial centre.

As regards developed countries, the European equity UCIs recorded a positive performance in view of the more accommodating monetary policy of the European Central Bank despite the slowdown of the global economy, the trade tensions between the United States and Europe and the political problems in the euro area. As a result of the progress in the Sino-American trade negotiations and the prudent monetary policy of the Federal Reserve, the category of US equity UCIs recorded an increase enhanced by the appreciation of the USD against the EUR. Although Japanese equities registered price losses against the backdrop of uncertainties concerning the future international trade relations which negatively impacted Japan’s foreign trade and the less favourable global economic environment, the appreciation of the JPY against the EUR led the category of Japanese equity UCIs to close in positive territory.

As regards emerging countries, the Asian equity UCIs performed overall well based on the positive effect of the progress in the Sino-American trade negotiations, despite the diverging developments in the different Asian countries. As regards the category of Eastern European equity UCIs, in view of the heterogeneous developments in the different countries of the region, this category recorded a slight price increase due, among others, to the positive development of oil prices. Following the political problems in many South American countries and the depreciation of some South American currencies, the category of Latin American equity UCIs registered a downward trend during the month under review.

Development of equity UCIs during the month of March 2019*

In Europe, the announcement by the European Central Bank of the key interest rates remaining at the current level and a new series of targeted longer-term refinancing operations of banks in a context of weaker macroeconomic data in the euro area supported the prices of EUR-denominated bonds so that, all in all, the category of EUR-denominated bond UCIs performed well.

In the United States, the long-term government bond yields denominated in USD also decreased due to the more prudent speech of the Federal Reserve regarding the future orientation of its monetary policy, in view of signs showing growth deceleration. This decrease in yields, reflected by an appreciation of prices of USD bonds, explains the rise in the category of USD-denominated bond UCIs.

In emerging countries, the more accommodating speech regarding monetary policy of the Federal Reserve and the reduction of risk premiums prompted the upward movement of the category of emerging market bond UCIs, despite the idiosyncratic risks for some countries.

Development of fixed-income UCIs during the month of March 2019* 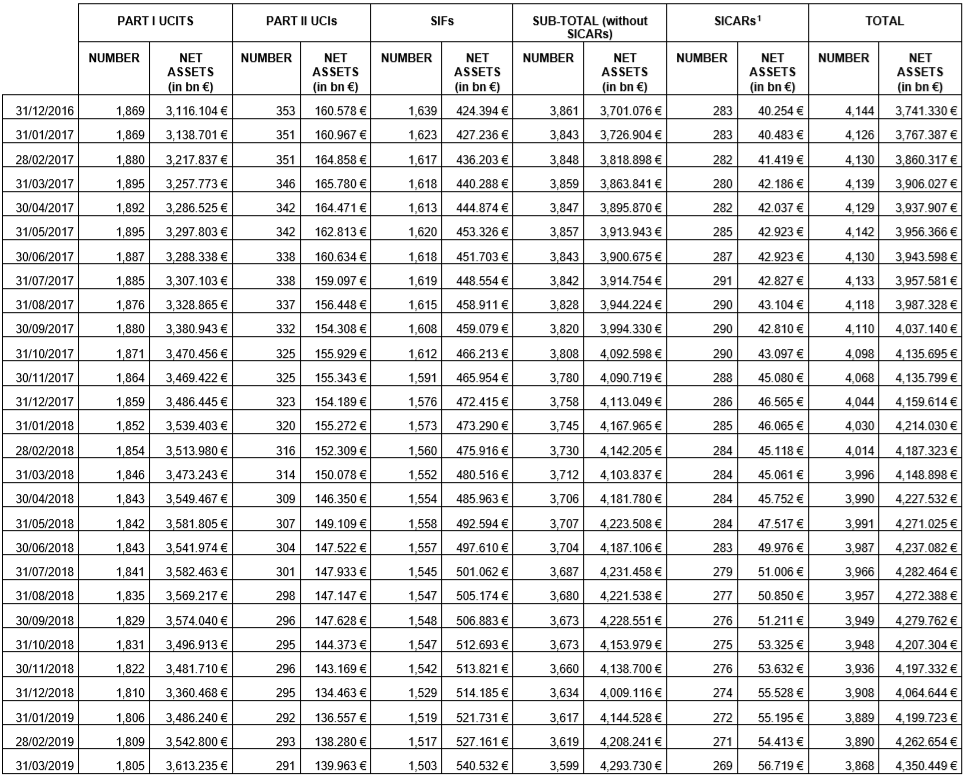