The Luxembourg UCI industry thus registered a negative variation amounting to EUR 86.966 billion during the month of May. This decrease represents the sum of negative net issues of EUR 4.048 billion (-0.09%) and the negative development in financial markets amounting to EUR 82.918 billion (-1.88%). 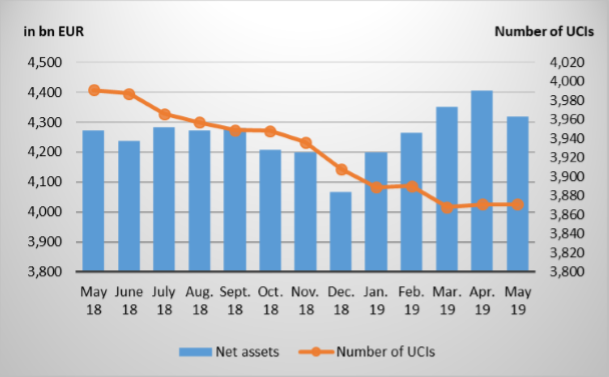 The number of undertakings for collective investment (UCIs) taken into consideration totalled 3,871 as against 3,871 in the previous month. A total of 2,517 entities adopted an umbrella structure, which represented 13,548 sub-funds. When adding the 1,354 entities with a traditional structure to that figure, a total of 14,902 fund units were active in the financial centre.

The trade tensions between China and the United States and the signs of the global growth slowdown overshadowed the financial markets, resulting in falling prices for almost all equity UCI categories.

As regards developed countries, the category of European equity UCIs also recorded a negative performance in a context of mitigated macroeconomic figures in the euro area, the risk of a no-deal Brexit and the threat of US customs duties on the European automotive industry. In light of the risks related to Sino-American trade tensions and signs of growth slowdown in the United States, the category of US equity UCIs also ended the month in negative territory. The trade tensions, the mitigated leading indicators in Japan and the appreciation of the JPY in its quality as ‘safe haven’, explain the losses registered in the Japanese equity UCIs.

As regards emerging countries, Sino-American trade tensions led to an overall fall in prices of the categories of Asian and Latin American equity UCIs. The positive development on the Russian stock exchange has, more or less, offset the negative performance of other Eastern European stock exchanges, so that the category of Eastern European equity UCIs remained almost unchanged.

Development of equity UCIs during the month of May 2019*

As regards the bond markets of developed countries, the government bond yields of high-rated countries, in view of their status of ‘safe haven’, decreased on both sides of the Atlantic as a result mainly of uncertainties with respect to international trade and signs of a global growth slowdown, whereas risk premiums of corporate bonds increased. All in all, the EUR-denominated and USD-denominated bond UCIs ended the month in positive territory.

As for emerging markets, the category of emerging market bond UCIs stagnated during the month under review, due to a drop in yields of some segments of the emerging countries, on the one hand, and trade tensions and the depreciation of the main emerging currencies, on the other.

Development of fixed-income UCIs during the month of May 2019* 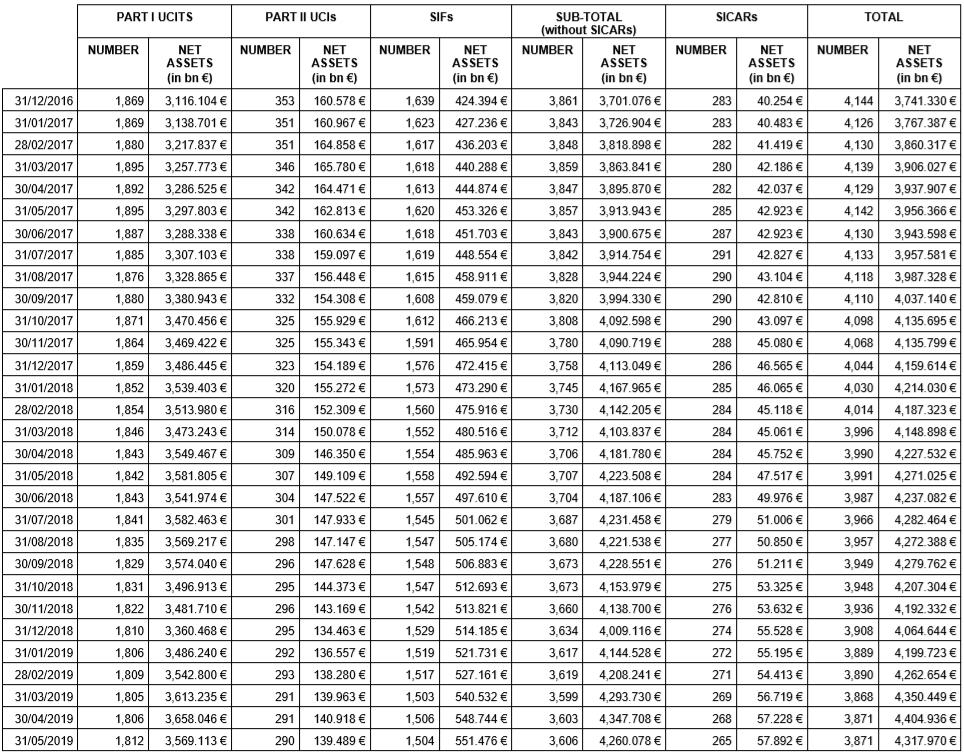 The following 14 undertakings for collective investment have been deregistered from the official list during the month under review: