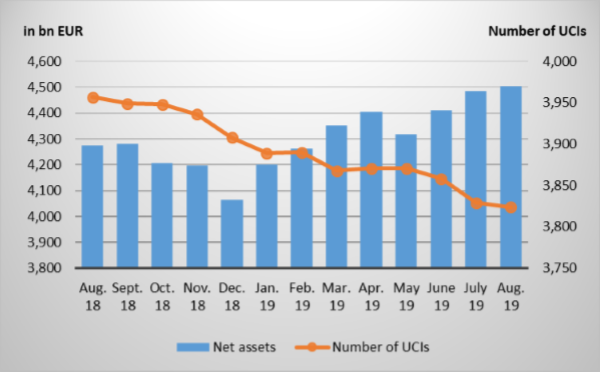 The number of undertakings for collective investment (UCIs) taken into consideration totalled 3,824 as against 3,829 in the previous month. A total of 2,499 entities adopted an umbrella structure, which represented 13,497 sub-funds. When adding the 1,325 entities with a traditional structure to that figure, a total of 14,822 fund units were active in the financial centre.

As regards, on the one hand, the impact of financial markets on the main categories of undertakings for collective investment and, on the other hand, the net capital investment in these UCIs, the following can be said about August.

In view of the rise in trade tensions and the risks for global economic growth, equity markets recorded an overall negative performance.

As regards developed countries, the category of European equity UCIs registered a negative performance against the background of mitigated macroeconomic figures and the possibility of a no-deal Brexit. The resurgence of the trade conflict between China and the United States combined with less favourable macroeconomic data in the United States contributed to the downward trend of the US equity UCI category. The category of Japanese equity UCIs also ended the month in negative territory in a context of mitigated economic figures in Japan, the strong appreciation of the yen and the conflict between Japan and South Korea.

As far as emerging countries are concerned, all categories of emerging market equity UCIs recorded price losses as a result of the deceleration in global growth, the escalation of trade tensions, price losses of the main commodities and the strong depreciation of most emerging currencies against the EUR despite the easing of the monetary policies in many emerging countries.

Development of equity UCIs during the month of August 2019*

In Europe, the less favourable global economic environment, trade tensions and the risk of a hard Brexit led to price increases of government bonds which were sought after by investors as ‘safe haven’. The prices of corporate bonds, despite an increase in risk premiums, followed this upward trend supported by the prospect of a more expansive monetary policy. All in all, EUR-denominated bond UCIs ended the month in positive territory.

In the United States, Sino-American trade tensions and expectations of new decreases of key interest rates by the US Federal Reserve resulted in a significant drop of long-term government bond yields spurring price increases in the category of USD-denominated bond UCIs.

Despite the downward trend of yields, the category of emerging market bond UCIs developed negatively in a context of rising risk premiums based on the escalation of trade tensions and idiosyncratic events. The significant depreciation of most emerging currencies against the EUR emphasised this negative performance.

Development of fixed-income UCIs during the month of August 2019* 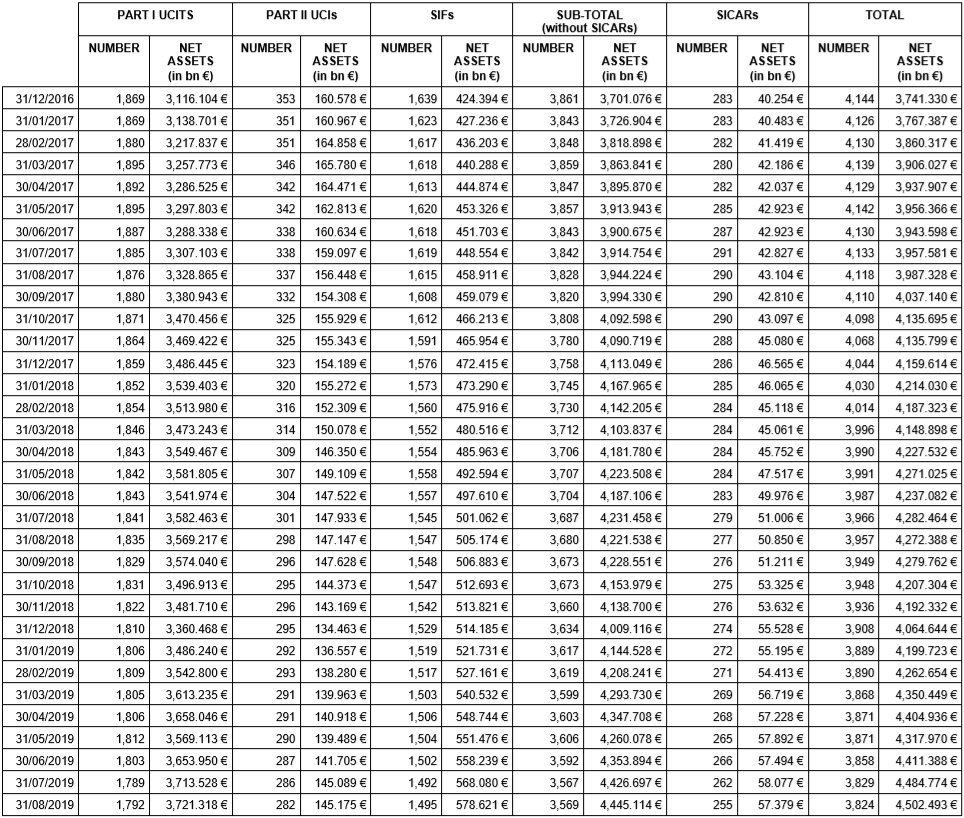 The following 19 undertakings for collective investment have been deregistered from the official list during the month under review:

Relevant for
We use cookies to ensure that we give you the best experience on our website. By clicking “Accept all”, you consent to the use of all of the cookies. Cookie settings Reject non essential Accept all