The Luxembourg UCI industry thus registered a positive variation amounting to EUR 73.386 billion in July. This increase represents the balance of positive net issues of EUR 14.589 billion (+0.33%) and of the positive development in the financial markets amounting to EUR 58.797 billion (+1.33%). 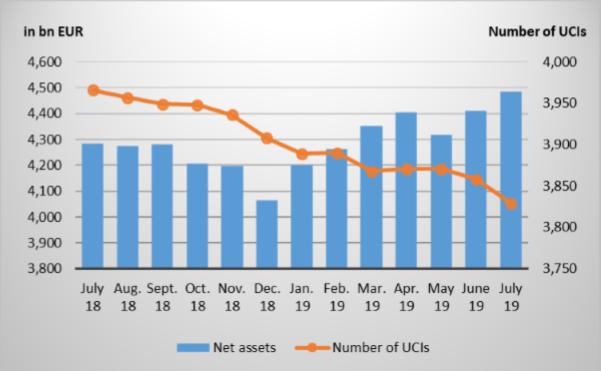 The number of undertakings for collective investment (UCIs) taken into consideration totalled 3,829 as against 3,858 in the previous month. A total of 2,504 entities adopted an umbrella structure, which represented 13,494 sub-funds. When adding the 1,325 entities with a traditional structure to that figure, a total of 14,819 fund units were active in the financial centre.

As regards, on the one hand, the impact of financial markets on the main categories of undertakings for collective investment and, on the other hand, the net capital investment in these UCIs, the following can be said about July.

In view of the persisting trade tensions and the risks for global economic growth, the central banks of developed countries returned to more accommodating monetary policies in July which supported overall the financial markets.

As regards developed countries, the category of European equity UCIs remained almost unchanged against the background of mitigated macroeconomic figures, the possibility of a no-deal Brexit and the announcement of a more expansionary monetary policy by the European Central Bank (ECB). In light of the anticipations of key interest rates being decreased by the Federal Reserve (Fed), the signs of a convergence in Sino-American trade negotiations and the announcement of positive business results, the category of US equity UCIs ended the month in positive territory. Encouraging macroeconomic figures in Japan as well as an ongoing accommodating monetary policy also led the category of Japanese equity UCIs to perform well, this movement being emphasised by the appreciation of the JPY against the EUR.

Regarding emerging countries, even if the different equity markets recorded diverging developments, the different categories of emerging market equity UCIs registered price increases in a context of more expansionary monetary policies, despite persisting trade tensions, geopolitical conflicts and the drop in oil prices.

Development of equity UCIs during the month of July 2019*

In Europe, in view of an inflation which remained below the ECB’s objectives and weak economic indicators in the euro area, the announcement of the ECB, at the end of July, to pursue a more expansionary monetary policy at the key interest rate and asset purchase level triggered price increases of EUR-denominated bonds comprising both, government and corporate bonds. Consequently, EUR-denominated bond UCIs ended the month up.

In the United States, the Fed reduced, at the end of the month, the key interest rates and ended the programme to reduce the size of its balance sheet in view of the macroeconomic risks linked to trade tensions and a deceleration of the global economic growth. The rates of return on USD-denominated government bonds remained almost unchanged, the appreciation of the USD against the EUR having led to increases in the category of USDdenominated bond UCIs. The more accommodating orientations in monetary policy of most of the central banks as well as the appreciation of several emerging currencies explain the positive development of the category of emerging market bond UCIs.

Development of fixed-income UCIs during the month of July 2019* 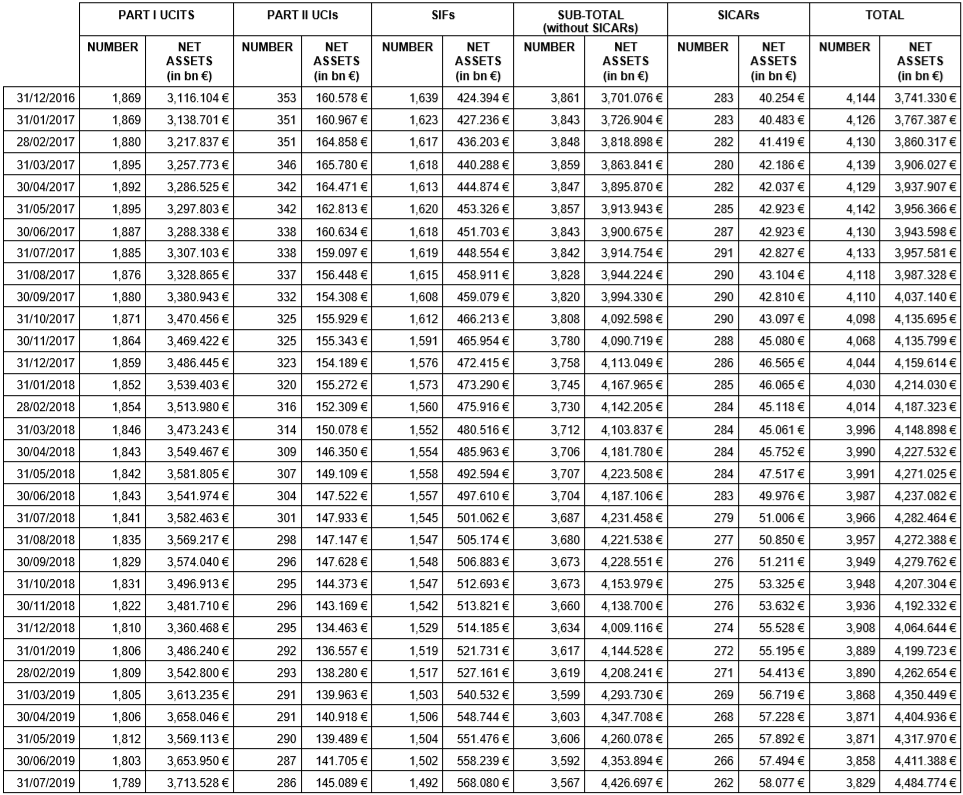 The following 38 undertakings for collective investment have been deregistered from the official list during the month under review: