The Luxembourg UCI industry thus registered a positive variation amounting to EUR 32.199 billion in July. This increase represents the sum of positive net capital investments of EUR 30.718 billion (+0.67%) and of the positive development of financial markets amounting to EUR 1.481 billion (+0.03%). 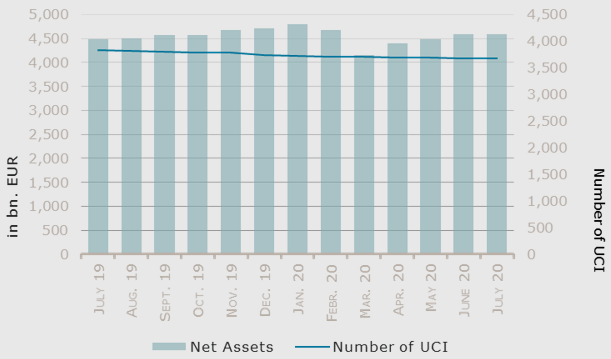 The number of undertakings for collective investment (UCIs) taken into consideration totalled 3,664, against 3,669 the previous month. A total of 2,401 entities adopted an umbrella structure representing 13,450 sub-funds. Adding the 1,263 entities with a traditional UCI structure to that figure, a total of 14,713 fund units were active in the financial centre.

As regards the impact of financial markets on the main categories of undertakings for collective investment and the net capital investment in these UCIs, the following can be said for the month of July:

As far as developed countries are concerned, the European equity UCI category has developed sideways amid, on one hand, a severe economic contraction in Europe and a rise in infection rates in some European countries and, on the other hand, the approval of the EU pandemic recovery fund. The US equity UCI category was supported mainly by a better than expected earnings season in different sectors, despite a sharp GDP contraction and increasing unemployment figures. These gains were partly compensated by the depreciation of the USD against the Euro. The Japanese equity UCI category fell under the impetus of macroeconomic concerns, a pick-up of COVID-19 infection rates, and the strengthening of the Yen.

As for emerging countries, the Asian equity UCI category enjoyed overall a strong performance due to improved economic projections and the depreciation of the USD, notwithstanding the renewed intensification of the US-China tensions. July saw globally a decline for the Eastern European equity UCI category following notably from a resurgence of COVID-19 infections in some Eastern European countries and the impact of the crisis on the economies in this region. The Latin American equity UCI category showed a strong performance over the month under review, mainly driven by an uptrend in investor confidence despite the divergent pandemic developments in various counties of this region.

On both sides of the Atlantic, the yields of highly rated government bonds decreased in a context marked by the persistent uncertainties related to the evolution of the pandemic and macroeconomic data confirming deep contractions in a number of large economies. In Europe, the yields of lower-rated Government bonds fell as well under the impulse of the approval of the EU pandemic recovery fund, leading to a positive performance of these bonds. Supported by the policy actions of the European Central Bank (ECB) and US Federal Reserve (FED), corporate bonds performed well in an overall positive market environment. As a consequence, EUR-denominated bond UCIs ended the month in positive territory, while the positive returns on USD-denominated bonds were overcompensated by the weakening of the USD against the Euro which resulted in a negative performance of the USD-denominated bond UCIs category.

Emerging markets bonds recorded a positive market performance in July in the face of the accommodative policies of central banks and the reduction in risk premiums, despite idiosyncratic risks still persisting in several emerging economies. These gains were more than offset by the depreciation of many emerging market currencies against the Euro, shifting the Emerging market bonds UCI category into negative territory. 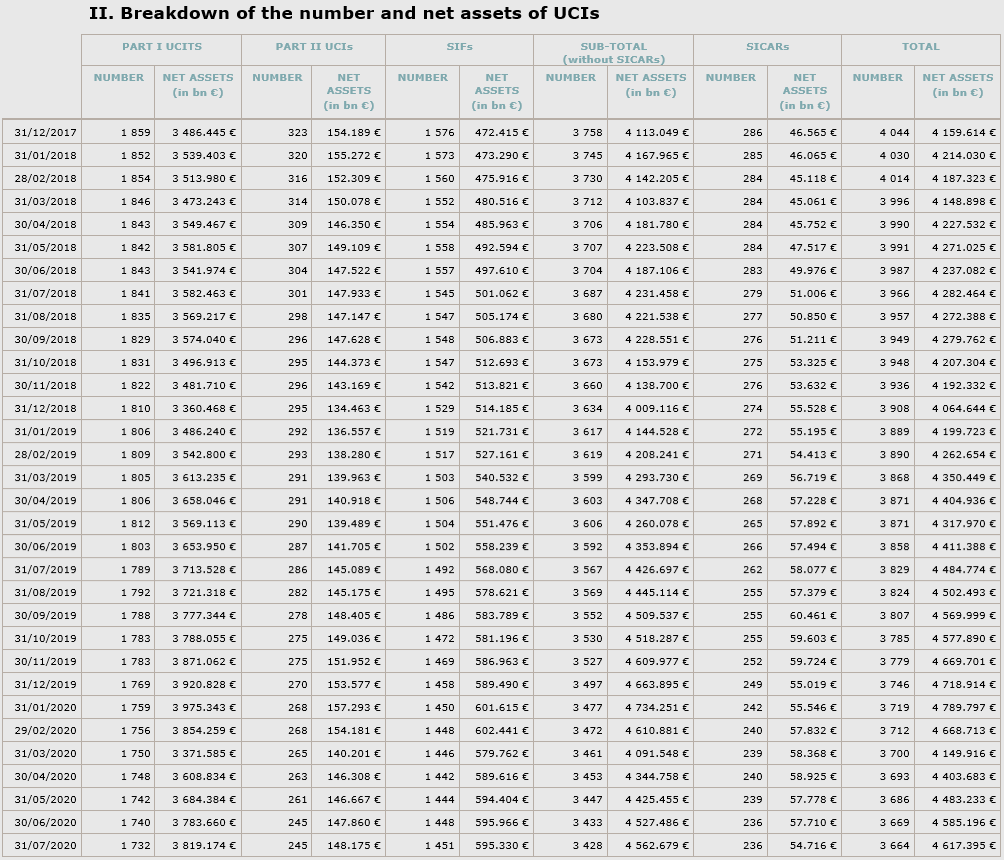