The Luxembourg UCI industry thus registered a positive variation amounting to EUR 91.369 billion in December. This increase represents the sum of positive net capital investments of EUR 33.032 billion (+0.68%) and of the positive development of financial markets amounting to EUR 58.337 billion (+1.19%). 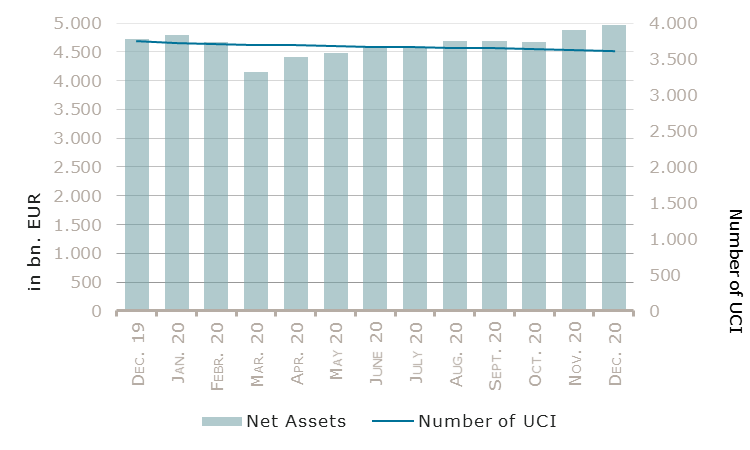 The number of undertakings for collective investment (UCIs) taken into consideration totalled 3,611, against 3,627 the previous month. A total of 2,377 entities adopted an umbrella structure representing 13,356 sub-funds. Adding the 1,234 entities with a traditional UCI structure to that figure, a total of 14,590 fund units were active in the financial centre.

As regards the impact of financial markets on the main categories of undertakings for collective investment and the net capital investment in these UCIs, the following can be said for the month of December:

Global equity markets pursued their upside movement in the context of the vaccine approvals, stimulus packages in different countries and the continued monetary support from major Central Banks.

Concerning developed markets, the European equity UCI category registered a positive performance supported by the launch of the vaccination campaign by the end of December, the compromise found on the EU budget package and the EU Recovery Fund, the extension of the Pandemic Emergency Purchase Program (PEPP) by the European Central Bank (ECB), better macroeconomic data and the BREXIT deal between the EU and the UK. Amid the prospect of a USD 900 billion fiscal stimulus package in the United States and the start of the rollout of the Covid-19 vaccine, the US equity UCI category generated a robust return compensated in part by the depreciation of the USD against the EUR. The Japanese equity UCI category followed the upward trend on the grounds of the fiscal stimulus program decided by the Japanese government and continued monetary easing measures, despite a depreciation of the Yen against the EUR.

As for emerging countries, the Asian equity UCI category rose against the backdrop of improving economic data, liquidity injections by the Chinese Central Bank and the COVID19 infection rates which remained more contained in comparison to other regions. The Eastern European equity UCI category followed the upward trend in December, driven by the Coronavirus vaccine rollouts in various parts of Europe and rising oil prices due to the agreement reached by the OPEC countries and Russia on oil production. The Latin American equity UCI category rallied on the basis of growing investor confidence, stronger commodity prices and the positive developments of Brazil’s and Mexico’s equity markets.

As for the EUR-denominated bonds, highly rated government bonds moved sideways whereas the spreads of lower-rated government bonds of peripheral countries and investment grade corporate bonds decreased slightly (i.e. bond prices increased) mainly due to the continued monetary support and the announcement of the ECB to extent its Pandemic Emergency Purchase Program (PEPP) in 2021, shifting the EUR-denominated bond UCIs category into positive territory.

US government bonds prices declined in December under the impulse of a prospective fiscal stimulus package, leading to an increase of the yield divergence between long-term Euro and US denominated sovereign bonds. US Corporate bonds on the other hand registered gains in December, supported by the announcement of the Federal Reserve Bank to continue its asset purchases as long as its inflation and employment objectives are not fulfilled. In combination with the depreciation of the USD against the EUR, the USD-denominated bonds UCI category finished overall in negative territory.

The Emerging market bonds UCI category generated a robust return amid the growing demand for riskier assets, the reduction of risk premiums as well as the agreement reached by OPEC countries and Russia on oil production. The negative evolution of emerging market currencies compensated partly these gains. 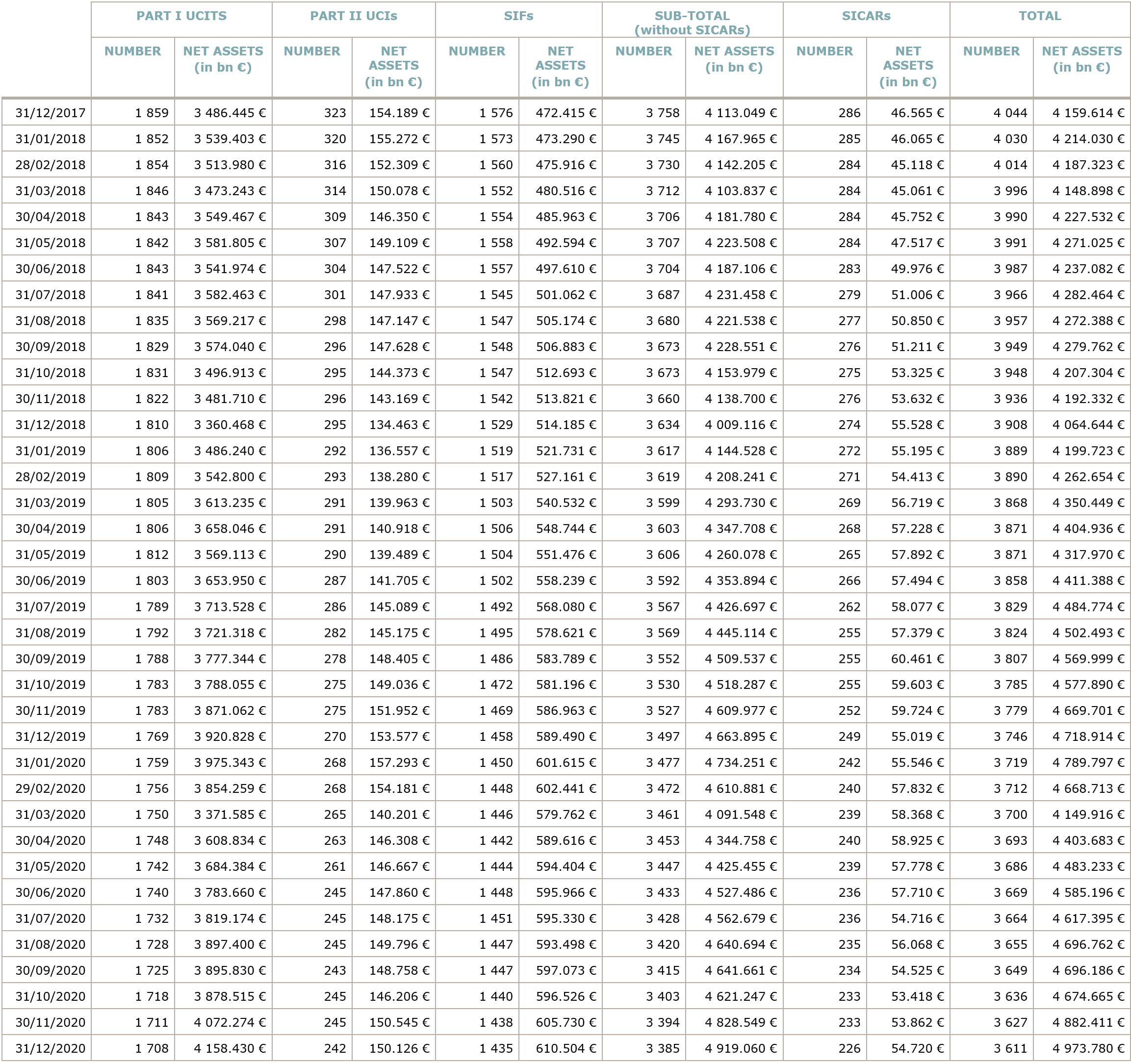 During the month under review, the following fourteen undertakings for collective investment have been registered on the official list:

The following thirty undertakings for collective investment have been deregistered from the official list during the month under review: