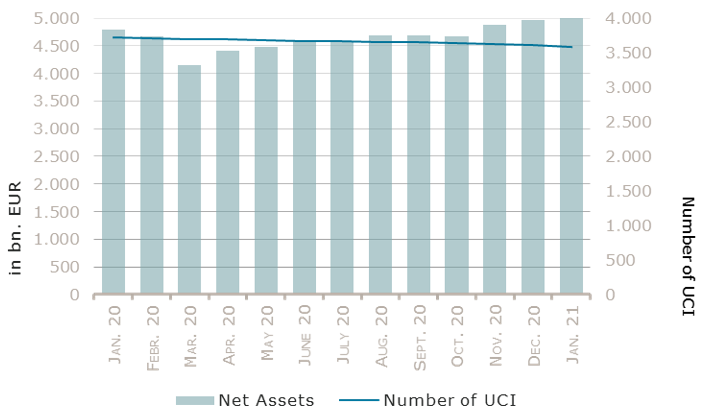 The number of undertakings for collective investment (UCIs) taken into consideration totalled 3,581, against 3,611 the previous month. A total of 2,357 entities adopted an umbrella structure representing 13,371 sub-funds. Adding the 1,224 entities with a traditional UCI structure to that figure, a total of 14,595 fund units were active in the financial centre.

As regards the impact of financial markets on the main categories of undertakings for collective investment and the net capital investment in these UCIs, the following can be said for the month of January:

Global equity markets registered a divergent development in the context of the extended lockdowns, the vaccine distribution problems and the various fiscal stimulus packages in different regions. Investment grade corporate bonds moved sideways, whereas government yields increased for the month of January.

Concerning developed markets, the European equity UCI category registered a negative performance induced by a slow roll-out of Covid-19 vaccines, the emergence of more infectious virus strains, stricter lockdown measures and worsening economic indicators. Despite the prospect of an extensive economic stimulus package in the United States after the Democratic party secured control of Congress and the beginning mass vaccinations, US equity markets declined mainly due to coordinated speculative movements of a group of retail investors on a relatively small number of stocks, resulting in higher market volatility and reduced risk-appetite. The appreciation of the USD against the EUR compensated these losses and shifted the US equity UCI category in positive territory. The Japanese equity UCI category tracked sideways in January amid the perspective of further fiscal stimulus measures, the vaccine roll-out program, the turbulences on US equity markets and rising infection rates in Japan.

As for emerging countries, the Asian equity UCI category rose against the backdrop of improving economic data, the perspective of further fiscal stimulus measures in the US and the more moderate pandemic activity in Asia in comparison to other regions. The Eastern European equity UCI category developed sideways amid rising oil prices on the one hand and a weaker RUB and tensions between Russia and the EU due to the Navalny case on the other hand. The Latin American equity UCI category recorded a decline, driven by profit-taking following a strong fourth quarter 2020 and weaker domestic currencies.

US government bonds yields increased in January, supported by anticipated fiscal stimulus measures and as a result higher public debt and inflation, the relatively good vaccination progress in the US and falling infection rates. The appreciation of the USD against the EUR compensated for the rising yields and as a result the USD-denominated bond UCI category tracked sideways.

The Emerging market bond UCI category saw a slightly negative performance in the context of rising US government bond yields, higher inflation expectations in the wake of improving economic prospects and a divergent evolution of emerging market currencies. 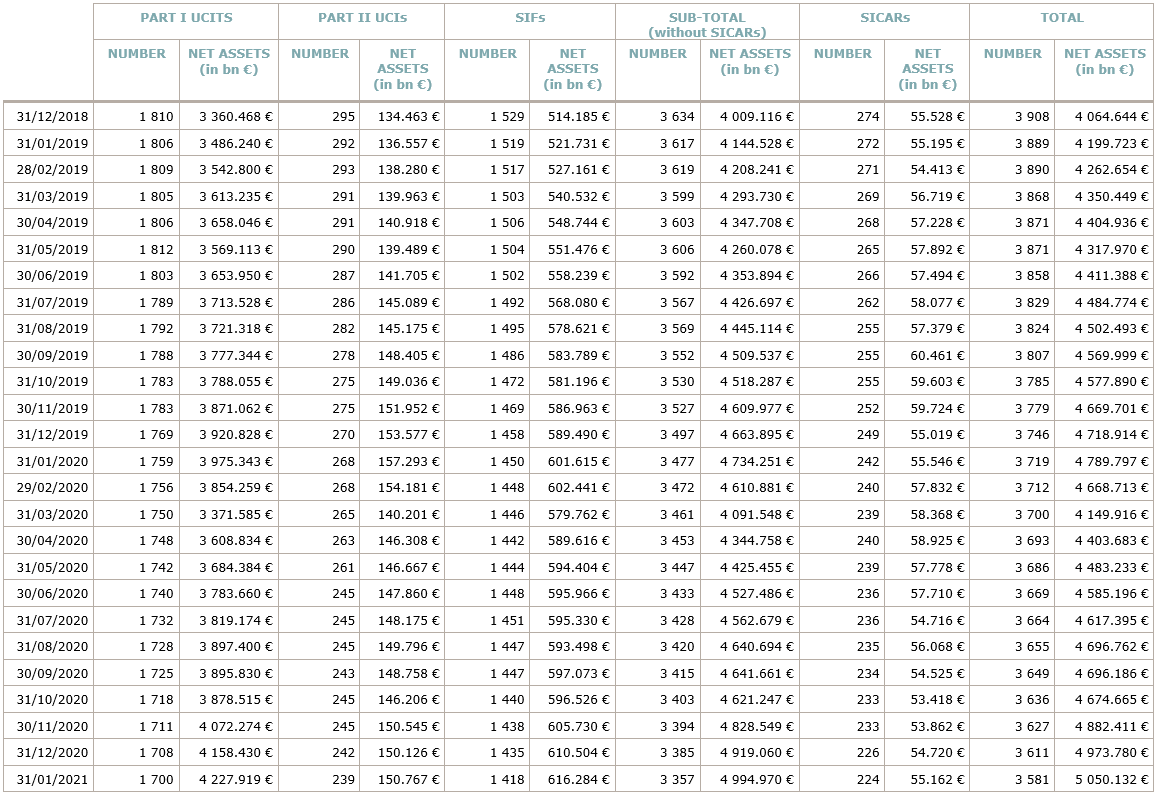 The following thirty-six undertakings for collective investment have been deregistered from the official list during the month under review: