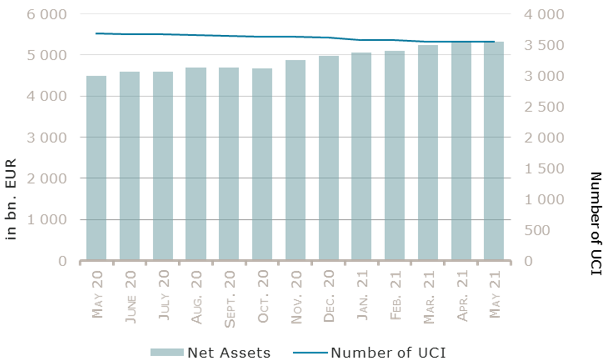 The number of undertakings for collective investment (UCIs) taken into consideration totalled 3,547, against 3,548 the previous month. A total of 2,340 entities adopted an umbrella structure representing 13,257 sub-funds. Adding the 1,207 entities with a traditional UCI structure to that figure, a total of 14,464 fund units were active in the financial centre.

As regards the impact of financial markets on the main categories of undertakings for collective investment and the net capital investment in these UCIs, the following can be said for the month of May:

Concerning developed markets, the European equity UCI category recorded a positive performance supported by the steady progress made in the vaccination rollout, the continuing strong corporate earnings season exceeding expectations and improved economic indicators. Despite better-than-anticipated US corporate results, the US equity UCI category declined in May amid higher inflation rates prompting concerns that monetary policy could be tightened and the depreciation of the USD against the EUR. While Japanese equities generated modest gains against the backdrop of the continued monetary policy support measures and a weakening of the yen providing some support for export-oriented companies, the depreciation of the Yen against the EUR shifted the Japanese equity UCI category in negative territory.

As for emerging countries, the Asian equity UCI category enjoyed modest returns on the back of a positive development of the Chinese and Indian equity markets, despite an uneven market sentiment across the region. Overall, the Eastern European and Latin American equity UCI categories performed well in May, on the grounds of an improving global outlook and higher commodity prices supporting the equity markets in these regions.

In May, the equity UCI categories registered an overall positive net capital investment.

On the other side of the Atlantic, US treasuries were little changed in May following indications from the Federal Reserve (FED) that it maintains its accommodative monetary policy stance at the current juncture, despite rising inflation expectations. US corporate bonds on the other hand yielded positive returns. As a result, the USD-denominated bond UCI category slightly gained over the month under review, despite the depreciation of the USD against the EUR.

The Emerging market bonds UCI category rose in May in a context marked by the stabilization of US government bond yields, a weaker USD, rising commodity prices and a divergent evolution of emerging market currencies 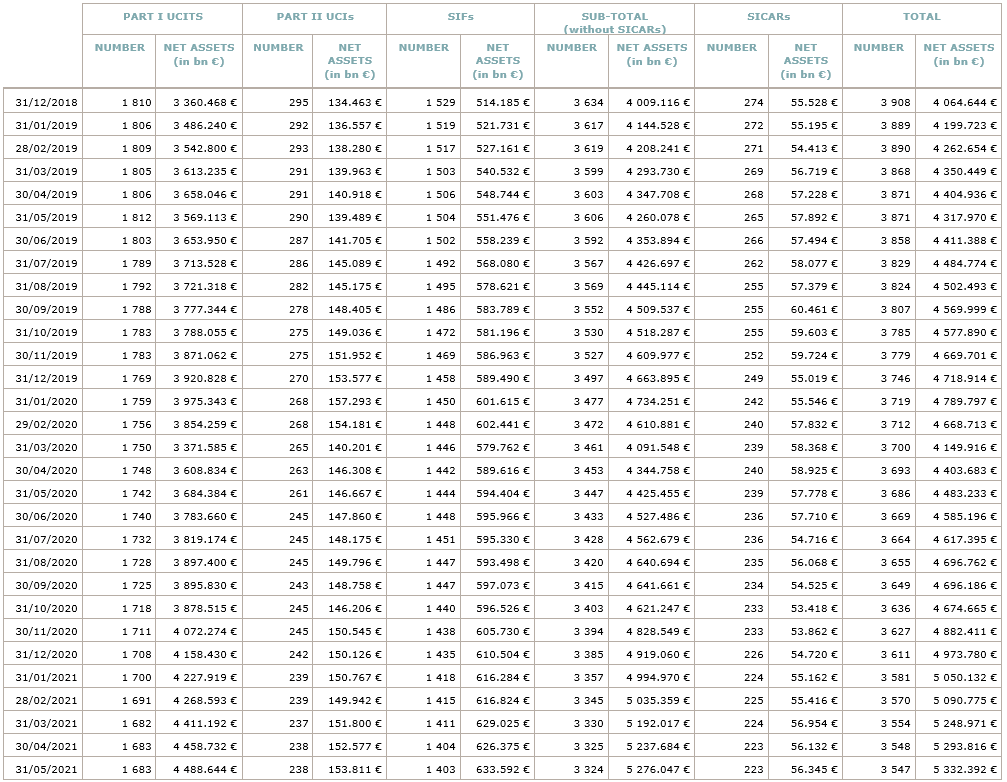