The Luxembourg UCI industry thus registered a positive variation amounting to EUR 53.845 billion in July. This increase represents the sum of positive net capital investments of EUR 39.083 billion (+0.71%) and of the positive development of financial markets amounting to EUR 14.762 billion (+0.27%). 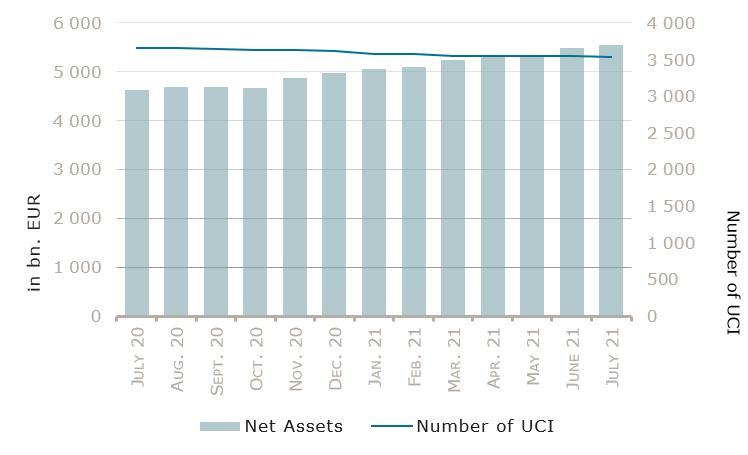 The number of undertakings for collective investment (UCIs) taken into consideration totalled 3,541, against 3,554 the previous month. A total of 2,331 entities adopted an umbrella structure representing 13,249 sub-funds. Adding the 1,210 entities with a traditional UCI structure to that figure, a total of 14,459 fund units were active in the financial centre.

As regards the impact of financial markets on the main categories of undertakings for collective investment and the net capital investment in these UCIs, the following can be said for the month of July.

Concerning developed markets, the European equity UCI category rose in a context marked by better than expected corporate results, the launch of the European Recovery Fund and improving economic data, despite the spread of the more contagious Delta variant of Covid-19 and uncertainties relating to the continuing supply bottlenecks that weighted on European equity markets. The US equity UCI category rose as well in July, supported by a strong corporate earnings seasons and the continuing monetary policy support of the US Federal Reserve (“Fed”) in spite of the sharp pick-up in inflation. Amid the surge of new COVID-19 cases in Japan and concerns over new variants prompting a new state of emergency in Tokyo, the Japanese equity UCI category finished the month in negative territory.

As for emerging countries, the Asian equity UCI category registered overall a negative performance driven by tighter regulations for several sectors in China, higher infection rates in various Asian countries and inflationary fears. The Eastern European equity UCI category tracked globally sideways on the back of divergent developments: while the Russian equity market fell against the backdrop of volatile oil prices and the decision of the Russian Central Bank to raise its key interest rate, the equity markets of other Eastern European countries such as Poland and Czechoslovakia followed the upward trend of European equity markets. The Latin American equity UCI category saw a decline in overall, mainly due to concerns about the spread of the Delta variant and its impact on global recovery.

On both sides of the Atlantic, long-term government bond yields decreased in July (i.e. bond prices increased) amid concerns related to the spread of the Delta variant and some signs of a more moderate global growth, which caused investors to shift toward safer investments. Despite higher inflation rates, the European Central Bank and US Fed pursued their expansive monetary policies which further contributed to this downward trend. Against this backdrop and notwithstanding a slight increase of the risk premia on US corporate bonds, the yields of both European and US corporate bonds decreased as well, pushing the EUR and USD denominated bond UCI categories into positive territory. 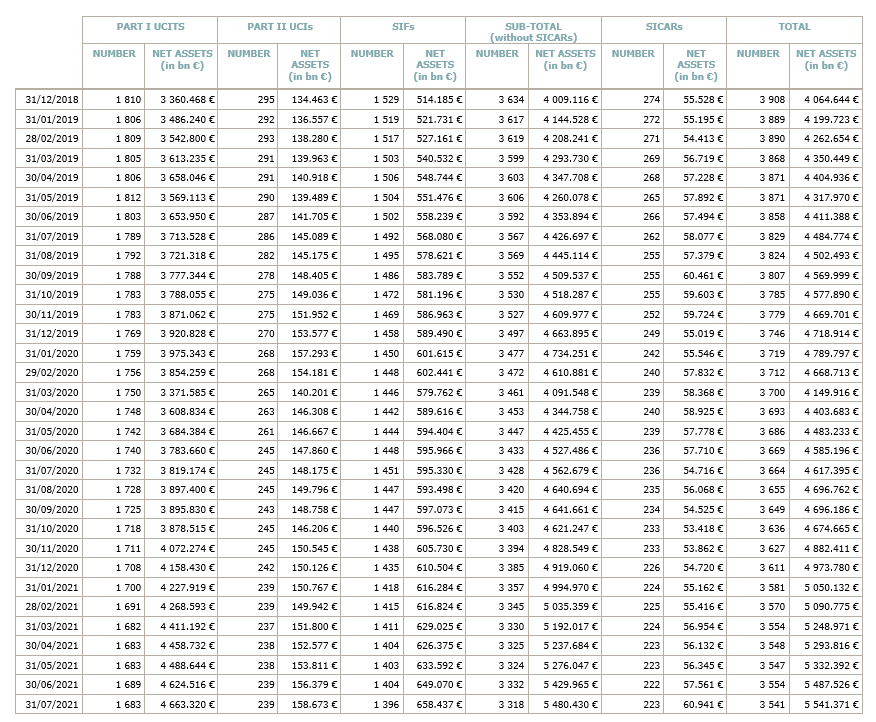