The Luxembourg UCI industry thus registered a negative variation amounting to EUR 141.070 billion in February. This decrease represents the sum of negative net capital investments of EUR 19.733 billion (-0.35%) and of the negative development of financial markets amounting to EUR 121.337 billion (-2.13%). 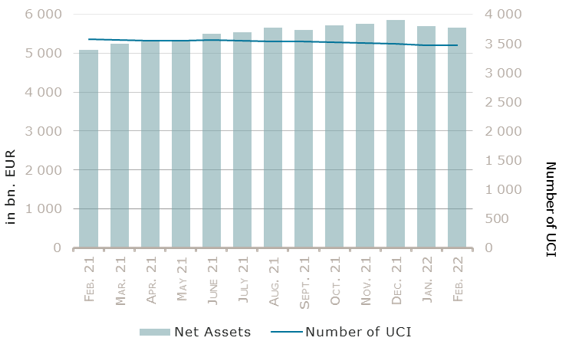 The number of undertakings for collective investment (UCIs) taken into consideration totalled 3,465, against 3,474 the previous month. A total of 2,270 entities adopted an umbrella structure representing 13,229 sub-funds. Adding the 1,195 entities with a traditional UCI structure to that figure, a total of 14,424 fund units were active in the financial centre.

As regards the impact of financial markets on the main categories of undertakings for collective investment and the net capital investment in these UCIs, the following can be said for the month of February.

Financial market activity was overshadowed by the Ukraine crisis and the effect of the related sanctions on Russia resulting in a rise in uncertainty, while inflation concerns persisted. Against this backdrop, most of the UCI equity categories and UCI fixed income categories registered a negative performance in February.

Concerning developed markets, the European equity UCI category recorded losses, given Europe’s proximity with the Ukrainian conflict and its significant reliance on Russian energy as well as the running up of the eurozone’s annual inflation rate. In the context of the Ukraine conflict, the US equity UCI category also realised a negative performance in February. The US global economic picture remained broadly unchanged, amid still robust economic growth and elevated inflation. The Japanese equity UCI category followed this downward trend in light of the geopolitical events, although the direct impact of the Ukraine crisis on Japan is likely to be limited as its trading activity with Russia is of relatively little importance.

As for emerging countries, the Asian equity UCI category globally decreased despite a divergent development across the region, mainly driven by the Russia-Ukraine conflict, stricter regulation in China regarding the internet industry and rising oil prices weighting on net importers such as India. The Eastern European equity UCI category realised a strong negative performance as Russian equities fell sharply before the Moscow stock exchange stopped trading, amid the Ukrainian conflict and the related severe sanctions from the global community. Against this background, the Russian rouble weakened significantly against the US dollar. The Latin American equity UCI category was the best-performing UCI category in February. Peru and Colombia recorded the highest gains, while Mexico, Brazil and Chile also recorded positive returns. The Brazilian market performed in line with its regional peers, as high foreign inflows and better-than-expected macroeconomic data further boosted investor confidence. In Mexico, the government announced an economic recovery plan in 2022 and measures incentivising a digital economy.

Development of equity UCIs during the month of February 2022*

Concerning the EUR denominated bond UCI category, yields rose (i.e. bond prices fell) in early February amid expectations that the European Central Bank (ECB) could announce tapering measures in its March meeting. Following the developments in the Ukraine, yields then declined in all segments of the European fixed income market while corporate bond spreads widened, as investors generally anticipated that the ECB could delay its plans to tighten its monetary policy. Against this backdrop, in overall the EUR denominated bond UCI category finished the month in negative territory.

With respect to the USD denominated bond UCI category, the first half of the month was marked by increasing inflation concerns and expectations that the Federal Reserve (Fed) would aggressively increase interest rates and withdraw monetary stimulus, resulting in rising yields. The geopolitical tensions arising from the Ukraine crisis attenuated this sentiment in the second half of the month despite an unchanged FED communication. As a consequence, USD bond yields started to decline. Globally, the USD denominated bond UCI category fell in February.

The Emerging market bond UCI category plunged in February, primarily in consequence of the geopolitical concerns relating to the Ukraine crisis, leading to a sell-off of emerging market bonds towards the end of the month.

Development of fixed income UCIs during the month of February 2022* 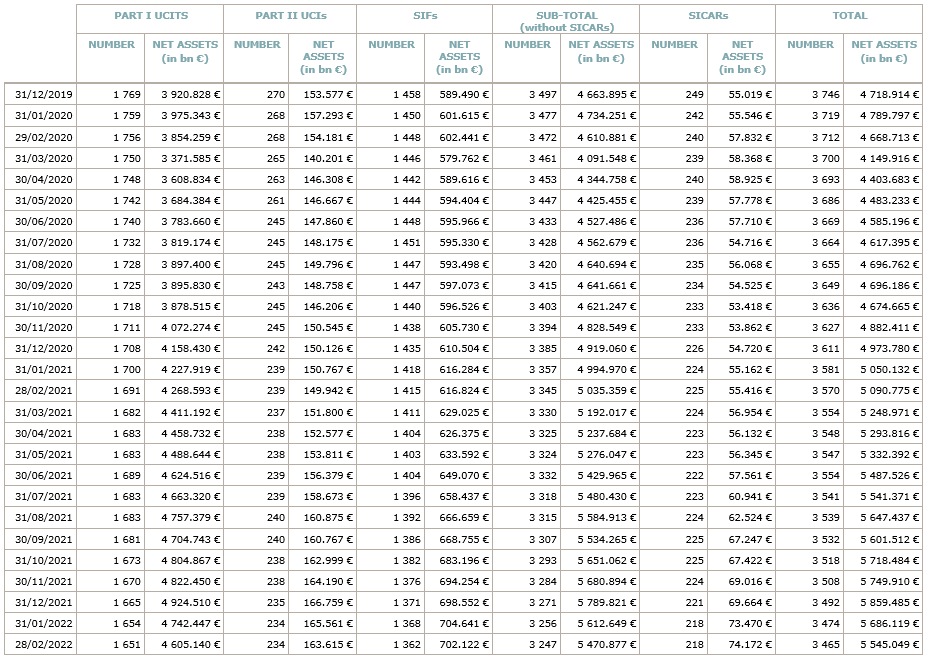