The Luxembourg UCI industry thus registered a negative variation amounting to EUR 80.238 billion in March. This decrease represents the sum of negative net capital investments of EUR 15.223 billion (-0.27%) and of the negative development of financial markets amounting to EUR 65.015 billion (-1.17%). 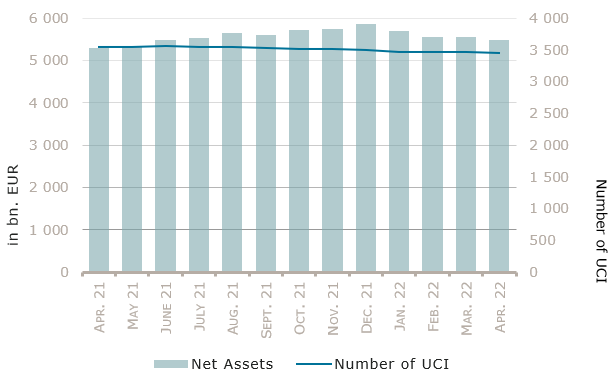 The number of undertakings for collective investment (UCIs) taken into consideration totalled 3,454, against 3,459 the previous month. A total of 2,263 entities adopted an umbrella structure representing 13,232 sub-funds. Adding the 1,191 entities with a traditional UCI structure to that figure, a total of 14,423 fund units were active in the financial centre.

As regards the impact of financial markets on the main categories of undertakings for collective investment and the net capital investment in these UCIs, the following can be said for the month of April.

The financial market activity was weakened by the continuing Ukraine crisis, new lockdowns due to zero-COVID policy in China, inflation levels exceeding 7% on both sides of the Atlantic, increasingly stricter monetary policy stances and downward revisions of global growth prospects. In consequence most of the UCI equity categories lost value.

Concerning developed markets, the European equity UCI category registered a negative performance. Europe recorded a deceleration in activity and a dropdown in consumer and manufacturer confidence indices due to persisting supply chain disruptions, high energy prices and inflation-induced compressed real incomes. The US equity UCI category also recorded a negative performance, the United States registered a larger than expected decline in GDP in the first quarter of 2022, weaker industrial activity, supply chain problems in some sectors and a record inflation which made the Fed signalling higher interest rate increases. The decline of US equity market was particularly sharp, pulled down by tech firms mainly. The Japanese equity UCI category was primarily driven in April by news on currencies and interest rates. Due to the rising differential of monetary policies – rising interest rates in the US and no change policy in Japan – the Yen sharply depreciated against the USD, which contributed to the downward trend in equity markets.

Development of equity UCIs during the month of April 2022*

In April, following the persistent high inflation figures and the increasingly restrictive monetary policy stances of major central banks as well as the uncertainty brought by the Ukraine crisis, we could observe a further rise in bond yields on both sides of the Atlantic.

Concerning the EUR denominated bond UCI category, the European Central Bank (ECB) confirmed in April the end of its quantitative easing programs in Q3 and optional interest rate hikes for the second half of 2022 (increasingly hawkish communications came mainly in May). In consequence yields rose over almost all categories (i.e. bond prices fell) and overall, the EUR denominated bond UCI category realised a negative performance.

Concerning the USD denominated bond UCI category, the Federal Reserve (Fed) indicated it is considering a relatively quick reduction in its balance sheet and announced more severe interest rates hikes. Despite the rise in government yields and a widening of investment grade bond spreads during the month, overall the USD denominated bond UCI category finished in positive territory due to the strong appreciation of the USD against the EUR for more than 5%.

The Emerging Market bond UCI category finished the month in negative territory in consequence of inflation pressures and rising rates, of the economic effects of the zero-COVID strategy in China, of the ongoing Ukraine crisis and more generally on the uncertainty surrounding the effects of the monetary policy tightening on the mid-term growth and corporate profitability.

Development of fixed income UCIs during the month of April 2022* 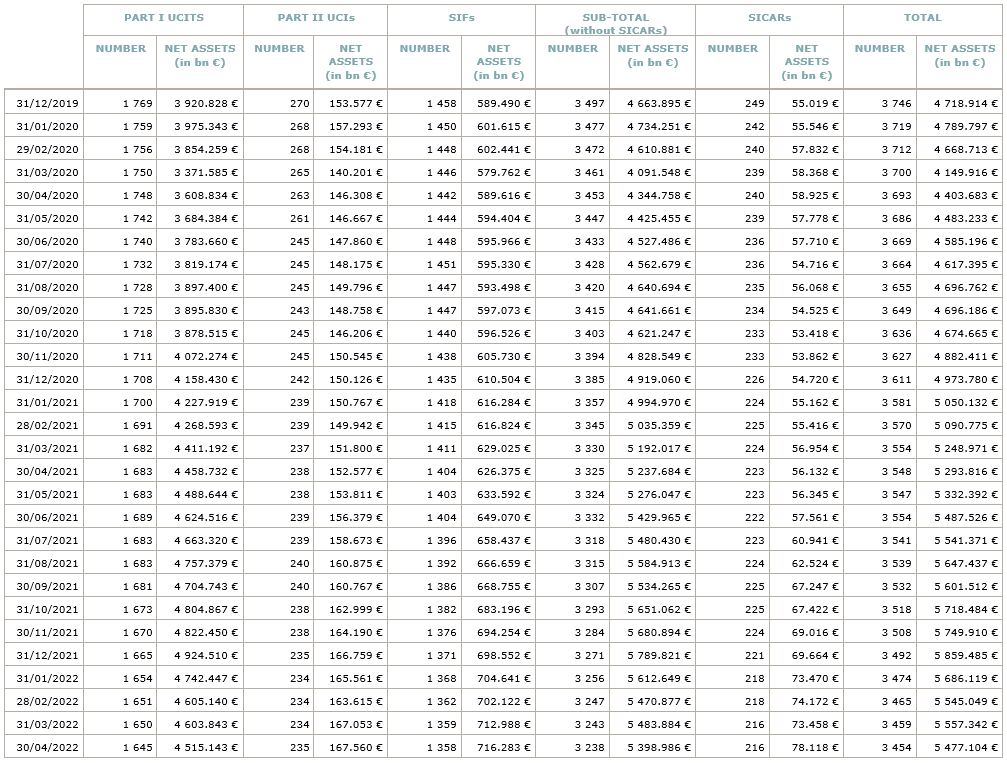