The Luxembourg UCI industry thus registered a positive variation amounting to EUR 101.591 billion in November. This increase represents the sum of positive net capital investments of EUR 8.074 billion (+0.16%) and of the positive development of financial markets amounting to EUR 93.517 billion (+1.85%). 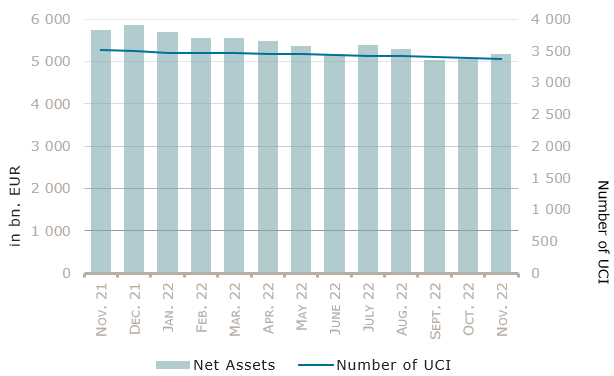 The number of undertakings for collective investment (UCIs) taken into consideration totalled 3,375, against 3,392 the previous month. A total of 2,204 entities adopted an umbrella structure representing 13,133 sub-funds. Adding the 1,171 entities with a traditional UCI structure to that figure, a total of 14,304 fund units were active in the financial centre.

As regards the impact of financial markets on the main categories of undertakings for collective investment and the net capital investment in these UCIs, the following can be said for the month of November.

Despite a general context marked by the Ukraine crisis, persistent high inflation, recession fears and rising interest rates, most UCI categories delivered positive returns in November. This performance was mainly driven by 1) decreasing inflation in the US and the expectation of decelerating interest rate hikes, 2) softening of the zero-COVID policy in China and 3) global easing of the supply chain bottlenecks.

Concerning developed markets, the European equity UCI category registered a positive performance due to the market perception that inflation was at, or close to, its peak and by slightly improving indicators of economic activity (though still in the recessionary zone).   Concerning the US equity UCI category, while the slowdown of the industrial activity was confirmed by new indicators, the US economy remained relatively resilient in terms of retail sales and employment. This relative resilience, together with decelerating inflation, contributed to the positive performance of the US equity UCI category in November (although this performance was partially neutralised by the USD depreciation). The Japanese equity UCI category also finished the month in positive territory, supported by a good season of quarterly earnings fed by the relative weakness of the yen.

Emerging countries outperformed developed markets in November. The rally in Asian equity category was driven by the potential warming of the China-US relationship ahead of the G20 meeting, by the softening of the zero-COVID policy in China and by policy support for the property sector, despite macroeconomic data still being on the downside. The Eastern European equity UCI category realised a negative performance. The Latin American equity UCI category was the worst performing UCI category in November due to declining commodity prices and EUR appreciation mainly.

Development of equity UCIs during the month of November 2022*

In fixed income markets, government bond yields were declining on both sides of the Atlantic and the investor demand for investment grade and High Yield was relatively strong.

The European Central Bank (ECB) interest rates remained at 2% in November (no meeting was planned in November). While some advanced indicators signalled the potential peaking of inflation in the EU, and given the decreasing inflation in the US, markets started to price a potential deceleration of interest rate hikes by the ECB. As a result, yields decreased, i.e. prices rose, in November and the credit spreads narrowed. Overall the EUR denominated bond UCI category realised a positive performance in November.

The Federal Reserve Bank (Fed) decided at the beginning of November to increase the US interest rates by 75 basis points to 4%. Given the figures of decreasing inflation published in November and a consecutively softer communication of the Fed paving the way for a slowdown of interest rate rises, the 10-year US government yields decreased by around 40 basis points. The USD denominated bond UCI category recorded a positive performance in November, though moderate due to the depreciation of the USD against the EUR.

The Emerging Market bond UCI category delivered positive returns in November, from both investment grade and high yield bonds, partly due to potential deceleration of interest rate hikes in the US and EU and to the easing of the zero-COVID policy in China.

Development of fixed income UCIs during the month of November 2022* 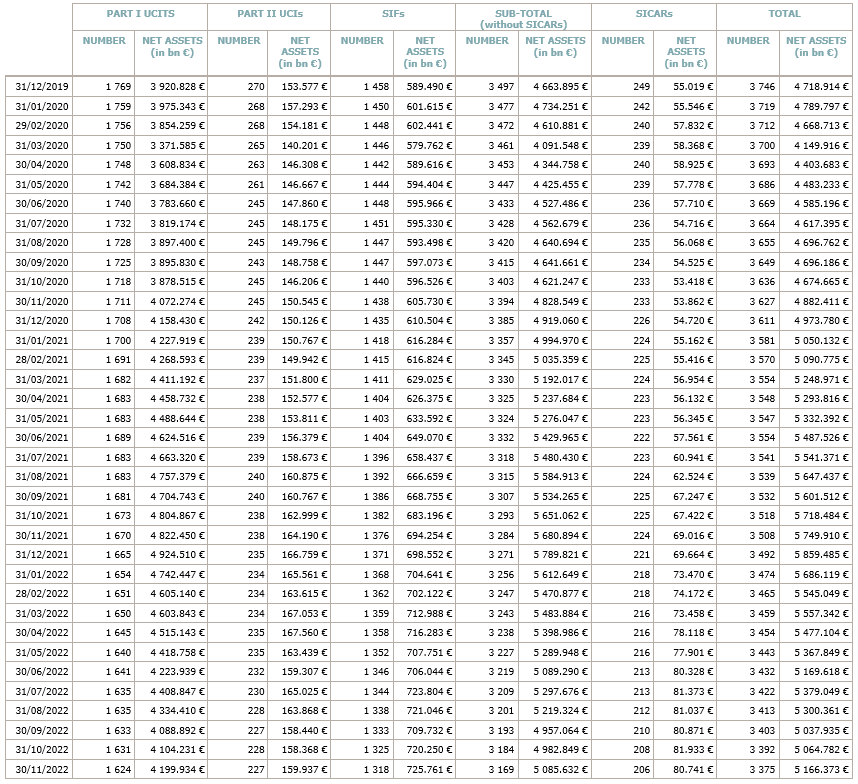 During the month under review, the following four undertakings for collective investment have been registered on the official list:

The following twenty-one undertakings for collective investment have been deregistered from the official list during the month under review: