Consequently, the Luxembourg UCI industry registered a positive variation of EUR 46.676 billion in April. This increase represents the balance of positive net issues of EUR 24.499 billion (0.72%) and a positive development in financial markets amounting to EUR 22.177 billion (0.65%). 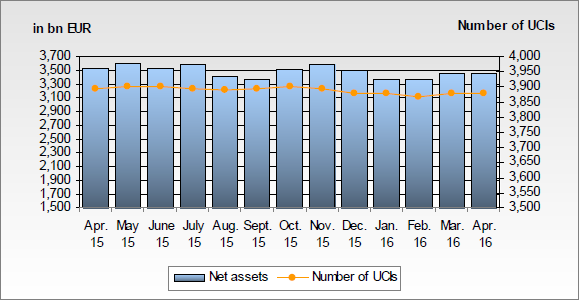 The number of undertakings for collective investment (UCIs) and specialised investment funds (SIFs) taken into consideration totalled 3,880 as against 3,879 in the previous month. A total of 2,568 entities have adopted an umbrella structure, which represents 12,853 sub-funds. When adding the 1,312 entities with a traditional structure to that figure, a total of 14,165 fund units are active in the financial centre.

As regards, on the one hand, the impact of financial markets on Luxembourg UCIs and SIFs (hereafter the “UCIs”) and, on the other hand, the net capital investment in these UCIs, the following can be said about April 2016.

All the categories of equity UCIs registered a positive development during the month under review notably relating to the publication of overall reassuring economic figures and the ongoing rebound of oil prices.

As far as developed countries are concerned, European and US equity UCI categories realised a positive performance due, in particular, to the positive growth figures on both sides of the Atlantic. Even if stock prices as regards equity UCIs from Japan developed negatively in a context of economic indicators below investors’ expectations and in the absence of new monetary easing measures from the Bank of Japan, this decrease, however, has been more than offset by a sharp appreciation of the YEN against the EUR of more than 4.5%.

As regards emerging countries, the Asian equity UCI category, despite divergent equity market developments in the different countries of the region, closed the month with an overall positive performance. As a result of the oil prices as well as the improved economic indicators, the Eastern European and Latin American equity UCIs appreciated despite the political and economic problems in these regions.

Development of equity UCIs during the month of April 2016*

As far as EUR-denominated bond UCIs are concerned, government bonds experienced an increase in yields, due to less fears as regards global recession and the wait-and-see attitude of the European Central Bank. Similarly, yield spreads between high rated and lower rated countries increased slightly. As a result of the private bond buyback programme of the European Central Bank, the European private bonds recorded overall price increases. All in all, EUR-denominated bond UCIs registered a loss in value.

The yields of US government bonds only increased slightly following the cautious speech of the Fed, stressing that there will be no immediate rise in the interest rates. On the US private bond market, performance was positive. Overall, USD-denominated bond UCIs are up.

The category of emerging countries bond UCIs closed the month in positive territory due to the decrease in risk premiums on emerging bonds that resulted in an increase in bond rates founded on an increase in commodity prices, more stable economic data in China and the Fed’s cautiousness with interest rate policy.

Development of fixed-income UCIs during the month of April 2016* 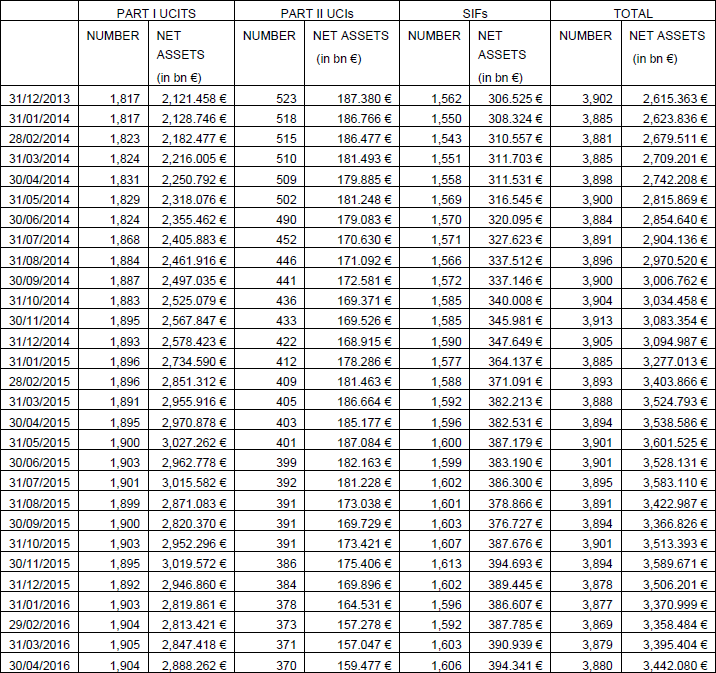 In April, the following 22 undertakings for collective investment and specialised investment funds were registered on the official list:

The following 21 undertakings for collective investment and specialised investment funds were deregistered from the official list during April: