The number of undertakings for collective investment (UCIs) and specialised investment funds (SIFs) taken into consideration totalled 3,882 as against 3,880 in the previous month. A total of 2,569 entities have adopted an umbrella structure, which represents 12,851 sub-funds. When adding the 1,313 entities with a traditional structure to that figure, a total of 14,164 fund units are active in the financial centre.

As regards, on the one hand, the impact of financial markets on Luxembourg UCIs and SIFs (hereafter “UCIs”) and, on the other hand, the net capital investment in these UCIs, the following can be said about May.

As regards developed countries, the European, American and Japanese equity UCIs all achieved positive performance. As a result of still positive economic growth figures in Europe and despite uncertainties related to the British referendum, the European equity UCIs appreciated. As far as American and Japanese equity UCIs are concerned, this increase is due to positive results of undertakings in the United States and an economic growth higher than expected entailing the depreciation of the yen in Japan.

As regards emerging countries, the Asian equity UCI category, following heterogeneous developments of the equity markets in the different countries of the region, closed the month, overall, with a slight increase despite mixed indicators for the Chinese economy. In the face of enduring political and economic issues in these regions, the Eastern European and Latin American equity UCIs recorded, overall, price losses.

Development of equity UCIs during the month of May 2016*

EUR-denominated bond UCIs recorded a positive performance due to the continuation of the accommodative monetary policy by the European Central Bank within a context of still very low inflation and high uncertainties, overall, resulting in lower yields both for government bonds and EUR-denominated corporate bonds.

In the United States, the yields of bonds changed little in the month under review, with, in particular, the publication of the minutes of the Fed’s monetary policy committee which increased the likelihood of a rise in interest rates in June/July. Moreover, expectations of higher US interest rates led to an appreciation of the USD against the EUR which implied a positive trend for USD-denominated bond UCIs at the end of the month.

The slight decrease in emerging countries bond UCIs occurred in a context of (upward and downward) rating changes of certain countries, divergent monetary policies as well as enduring political and economic issues.

Development of fixed-income UCIs during the month of May 2016* 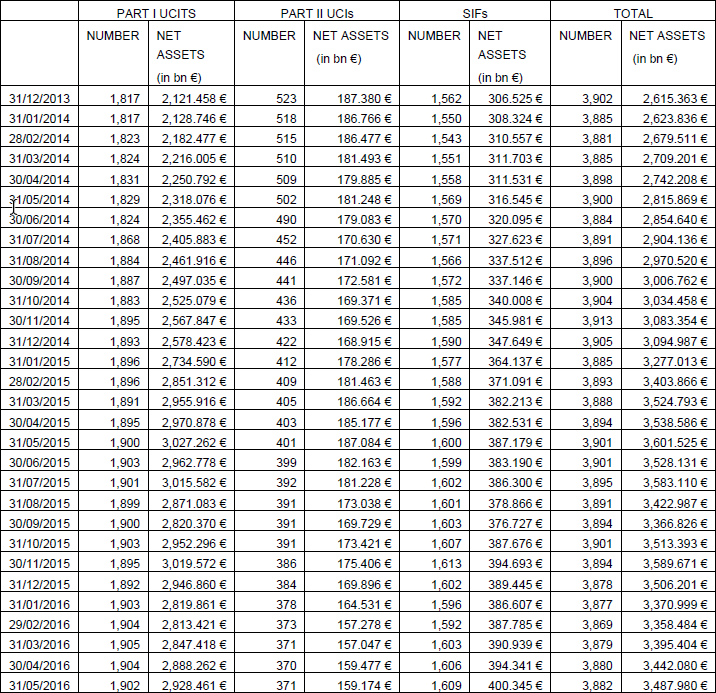 In May, the following 18 undertakings for collective investment and specialised investment funds have been registered on the official list:

The following 16 undertakings for collective investment and specialised investment funds have been deregistered from the official list during May: