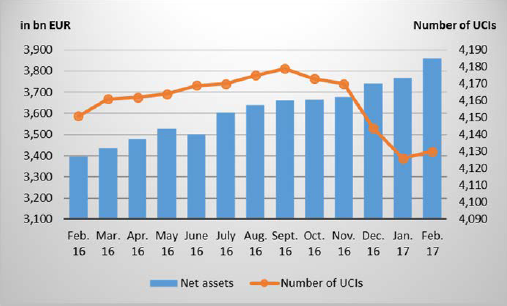 The number of undertakings for collective investment (UCIs) taken into consideration totals 4,130 as against 4,126 in the previous month. A total of 2,649 entities have adopted an umbrella structure, which represents 13,072 sub-funds. When adding the 1,481 entities with a traditional structure to that figure, a total of 14,553 fund units are active in the financial centre.

As regards, on the one hand, the impact of financial markets on the main categories of undertakings for collective investment and, on the other hand, the net capital investment in these UCIs, the following can be said about February:

All equity UCI categories registered a positive performance during the month under review.

As far as developed countries are concerned, the favourable economic indicators on both sides of the Atlantic are the driving force behind the price increases for European and American equity UCI categories, despite continuing political uncertainties in Europe. The Japanese equity market having sparsely evolved during the month under review, the appreciation of the JPY against the EUR explains the positive performance of Japanese equity UCIs.

As far as emerging markets are concerned, the Asian equity UCI category’s appreciation is notably linked to a buoyant global economy and good economic figures in several Asian countries. This general upward trend in financial markets sustained Eastern European and Latin American equity UCI categories; this growth was less accentuated for Eastern European equity UCIs due to the decrease in oil prices and the appreciation of the rouble which affected the Russian domestic stock markets.

Development of equity UCIs during the month of February 2017*

As far as bond markets are concerned, the returns decreased on both sides of the Atlantic.

In Europe, the continuity of the ECB’s asset buy back policy and the ongoing political uncertainties, despite positive economic data, implied a decrease in government and corporate bond yields supporting the valorisation of EUR-denominated bond UCI categories.

Despite the likelihood of an increase in key interest rates by the US Federal Reserve, considering the improving economic climate in the US, the lack, in particular, of visibility in the expansionary fiscal measures announced by the new US president implied a minor decline in USD-denominated bond yields. Together with a USD vs. EUR appreciation, USD-denominated bond UCIs registered a positive performance during the month under review.

The marginal yield decreases in the United States, the movements of capital towards emerging countries, the stabilisation of the prices of some raw materials as well as the tightening of risk premiums on emerging countries’ bonds allowed emerging market bond UCIs to develop positively.

Development in fixed-income UCIs during the month of February 2017* 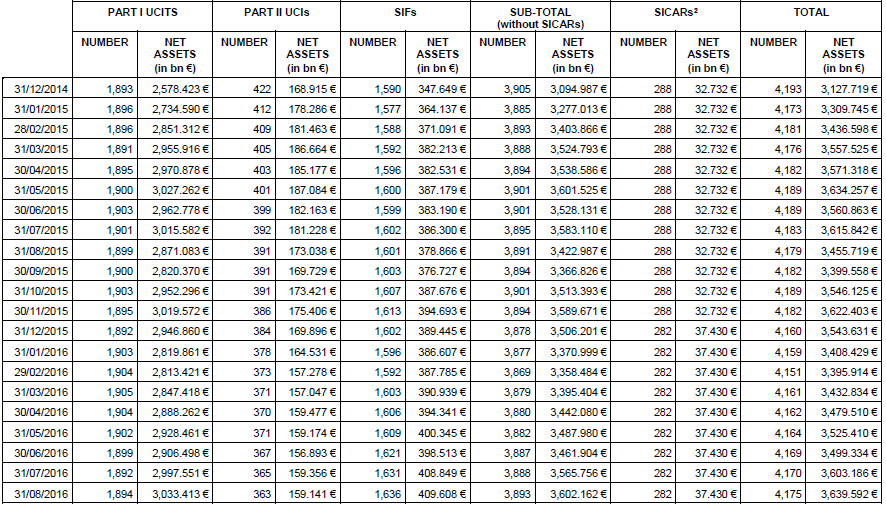 During the month under review, the following 19 undertakings for collective investment have been registered on the official list:

The following 14 undertakings for collective investment have been withdrawn from the official list during the month under review:

1 Since the statistical data of SICARs were published on an annual basis only before December 2016, the chart includes the number and net assets of SICARs as at 31 December 2015 for the previous months, resulting in constant figures until November 2016 for these vehicles.

3 Undertaking for collective investment for which the designated management company has been authorised by the competent authorities of another Member State in accordance with Directive 2009/65/EC.