The Luxembourg UCI industry thus registered a positive variation amounting to EUR 13.983 billion in July. This increase represents the balance of positive net issues of EUR 29.150 billion (0.74%) and of the negative development of financial markets amounting to EUR 15.167 billion (-0.39%). 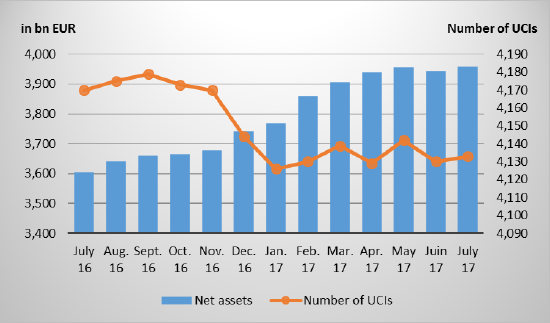 The number of undertakings for collective investment (UCIs) taken into consideration totals 4,133 as against 4,130 in the previous month. A total of 2,644 entities have adopted an umbrella structure, which represents 13,174 sub-funds. When adding the 1,489 entities with a traditional structure to that figure, a total of 14,663 fund units are active in the financial centre.

As regards, on the one hand, the impact of financial markets on the main categories of undertakings for collective investment and, on the other hand, the net capital investment in these UCIs, the following can be said about July 2017:

As far as developed countries are concerned, the European equity UCI category recorded, despite encouraging economic figures, slight price losses in the context of a strong appreciation of the EUR against the other main currencies. The depreciation of the USD against the EUR contributed to the fall of the US equity UCI category, whereas US equity markets have been growing in relation to performing corporate results and positive economic indicators. The category of Japanese equity UCIs slightly fell, mainly as a consequence of the JPY depreciating against the EUR.

As far as emerging countries are concerned, Asian equity UCIs are growing based on stable economic data in China and a positive global economic environment. Good economic figures in several countries of the region and the price increase of oil and of the main raw materials backed the positive performances of Eastern European and Latin American equity UCI categories.

Development of equity UCIs during the month of July 2017*

In Europe, government bond yields remained relatively consistent in the expectation of a detailed communication by the European Central Bank as regards its future asset buy-back programme. This month, yield spreads between euro area countries narrowed. Corporate bonds recorded price increases in a context of risk premium reductions, which implied a slight appreciation for the EUR-denominated bond UCI category.

The yields of US government bonds experienced moderate changes as well, due, on the one hand, to the US Federal Reserve initiating a tightening monetary policy and, on the other hand, political uncertainties in the US. Corporate bonds have experienced a positive development, but the depreciation of the USD against the EUR implied that the USD-denominated bond UCI category ended up in negative territory.

Influenced by positive economic figures and the rising prices of the main raw materials, emerging countries bonds experienced an upward trend, which was however largely compensated by the depreciation of the USD and of several emerging currencies against the EUR, resulting in the emerging countries bond UCI category closing lower.

Development of fixed-income UCIs during the month of July 2017* 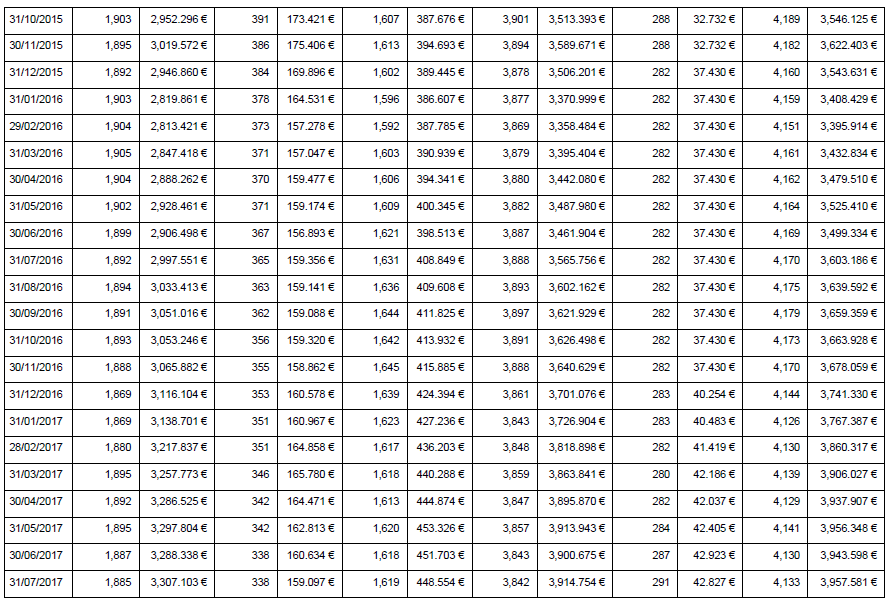 During the month under review, the following 23 undertakings for collective investment have been registered on the official list:

The following 20 undertakings for collective investment have been deregistered from the official list during the month of reference:

2 Before 31 December 2016, the statistical data of SICARs were published on an annual basis only.