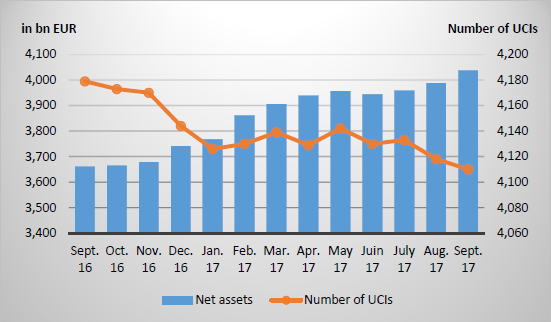 The number of undertakings for collective investment (UCIs) taken into consideration totals 4,110 as against 4,118 in the previous month. A total of 2,628 entities have adopted an umbrella structure, which represents 13,230 sub-funds. When adding the 1,482 entities with a traditional structure to that figure, a total of 14,712 fund units are active in the financial centre.

Most categories of equity UCIs developed positively during the month under review.

As regards developed countries, European equity UCIs realised a positive performance in a context of the sound economic data in the euro area and the result of the German elections. As a result mainly of the expectations linked to the tax reforms announced by the White House and the robust growth figures in the United States, US equity UCIs also ended the month in positive territory. Japanese equity UCIs developed positively owing to an overall favourable macroeconomic environment and the depreciation of the YEN against the USD and the EUR favouring Japan’s foreign trade.

As far as emerging countries are concerned, the Asian equity UCI category recorded slight price decreases notably due to a mild slowdown in growth in China. Against the background of divergent developments of the stock markets in the different Eastern European countries, Eastern European equity UCIs showed almost no change during the month under review. The sound economic figures in Brazil, the stable economic indicators in Mexico as well as the bullish trend in the main commodity prices explain the positive performance of US equity UCIs.

Development of equity UCIs during the month of September 2017*

In Europe, the yields of government bonds increased in a context of sound macroeconomic figures and the yield spreads between high-rated and lower-rated countries of the euro area generally narrowed. In the wake of the increase in government bonds, the corporate bonds recorded small price decreases so that EUR-denominated bond UCIs slightly depreciated during the month under review.

In the United States, the announcement by the US Federal Reserve of balance sheet cutbacks and a possible increase of the key interest rates in December of this year led to higher US government bond yields. Corporate bond yields followed that trend, entailing price decreases of USD-denominated bond UCIs.

Bond UCIs of emerging countries stagnated during the month under review, due to the impact, on the one hand, of globally stable economic fundamentals and the positive development of the main commodity prices and, on the other hand, the rise in the US interest rates and the USD appreciation.

Development of fixed-income UCIs during the month of September 2017* 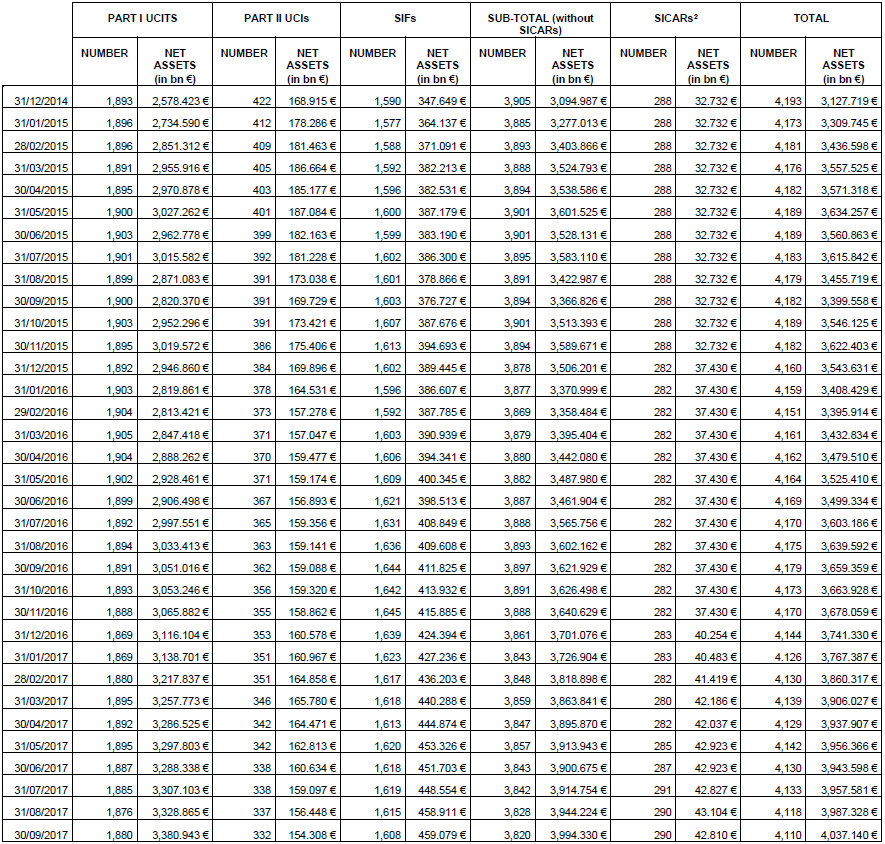 During the month under review, the following 18 undertakings for collective investment have been registered on the official list: