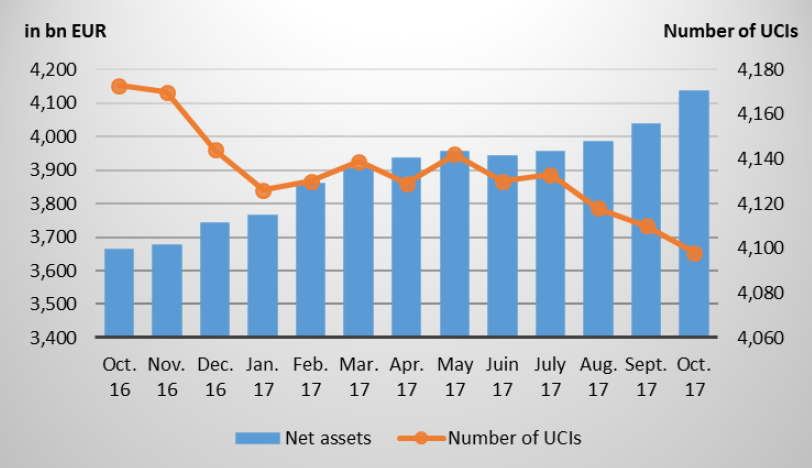 The number of undertakings for collective investment (UCIs) taken into consideration totals 4,098 as against 4,110 in the previous month. A total of 2,626 entities have adopted an umbrella structure, which represents 13,239 sub-funds. When adding the 1,472 entities with a traditional structure to that figure, a total of 14,711 fund units are active in the financial centre.

As regards, on the one hand, the impact of financial markets on the main categories of undertakings for collective investment and, on the other hand, the net capital investment within these UCIs, the following can be said about October.

The prices of all the equity UCI categories rose, except for the category of Latin American equity UCIs.

As regards developed countries, European equity UCIs performed positively in a context of dynamic economic growth in the euro area and the continuation of the ECB’s buy-back programme. Sound corporate results and the prospect of a tax reform in the United States bolstered the prices of American equity UCIs. The category of Japanese equity UCIs also ended the month in positive territory owing, notably, to a globally favourable economic environment and the possible continuation of the expansive monetary and tax policy following the re-election of the Japanese Prime Minister.

Development of equity UCIs during the month of October 2017*

In Europe, bond yields fell slightly due to the prolongation of the ECB’s asset buy-back programme. In addition, the rate spreads between high rated and lower rated countries narrowed. Yields of corporate bonds followed that trend, entailing price increases of EUR-denominated bond UCIs.

While USD-denominated bond yields rose owing notably to higher than expected economic indicators and the possible tax reform, the appreciation of the USD against the EUR made the US equity UCIs finish the month positively.

The strong influx of capital in emerging market bonds and the rise in commodity prices were offset by the prospects of a less expansive future monetary policy in Europe and in the United States, so that the category of emerging countries UCIs changed only slightly in the month under review.

Development of fixed-income UCIs during the month of October 2017*

During the month under review, the following fifteen undertakings for collective investment have been registered on the official list:

The following 27 undertakings for collective investment have been deregistered from the official list during the month under review:

3 Undertaking for collective investment for which the designated management company was authorised by the competent authorities of another Member State in accordance with Directive 2009/65/EC.