The Luxembourg UCI industry thus registered a negative variation of EUR 72.458 billion during the month of October. This decrease results from the balance of positive net issues of EUR 24.779 billion (+0.58%) and a negative development in financial markets of EUR 97.237 billion (-2.27%). 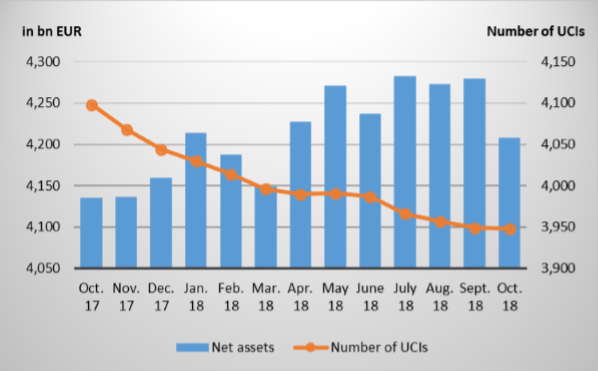 The number of undertakings for collective investment (UCIs) taken into consideration totalled 3,948 as against 3,949 in the previous month. A total of 2,564 entities adopted an umbrella structure, which represented 13,509 sub-funds. When adding the 1,384 entities with a traditional structure to that figure, a total of 14,893 fund units were active in the financial centre.

As regards, on the one hand, the impact of financial markets on the main categories of undertakings for collective investment and, on the other hand, the net capital investment in these UCIs, the following can be said about October.

Most equity UCI categories registered a sharp correction during the month under review.

As regards developed countries, the European equity UCI category recorded a negative performance in a context of fears of an economic slowdown in Europe, the decline in results of undertakings and the uncertainties related to the Italian budget. Despite sound economic fundamentals in the United States, the category of US equity UCIs developed negatively, mainly as a result of the increase of the long-term interest rates in the United States and the persistent trade tensions. The mixed economic indicators in Japan, fears of a global economic slowdown and the heightened trade tensions between China and the United States led to the heavy price losses in the Japanese equity UCI category.

As regards emerging countries, the persistent trade tensions between the United States and China, the slowdown in growth in China as well as the concerns regarding the global economic environment resulted in the depreciation of the prices of Asian equity UCIs. Despite the good results of Russian undertakings, the Eastern European equity UCIs could not avoid negative developments in the main equity markets, ending therefore down. This downward trend was due, in particular, to the fall in oil prices and geopolitical problems in the region. The category of Latin American equity UCIs ended in positive territory, against the background of the results of the Brazilian elections.

Development of equity UCIs during the month of October 2018*

In Europe, the rise of the risk aversion of investors led to the increase of prices of high-rated government bonds which were sought after as “safe haven”, whereas the persistent uncertainties regarding the Italian budget resulted in a decrease of low-rated government bond prices, so that, overall, government bonds developed little during the month. The uncertainties in the financial markets also caused the rise in risk premiums of corporate bonds. Consequently, EUR-denominated bond UCIs recorded slight price decreases.

In the United States, even if the fears of a monetary policy tightening in a context of sound economic figures negatively influenced bond prices, the appreciation of the USD against the EUR led the USD-denominated bond UCIs to end the month in positive territory.

The category of emerging market UCIs registered overall a negative performance as a result of the increased volatility in equity markets, the gradual decline of the Chinese growth, the persistent trade tensions, the rise in the US interest rates and the downward trend of commodity prices.

Development of fixed-income UCIs during the month of October 2018* 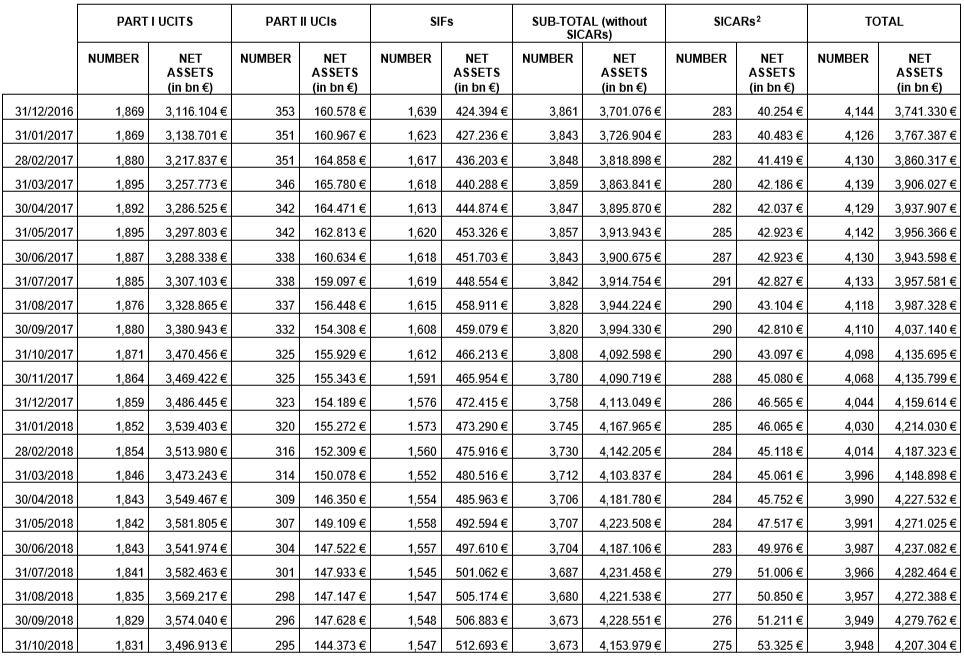 The following 12 undertakings for collective investment have been deregistered from the official list during the month under review:

2 Before 31 December 2016, the statistical data of SICARs were only published on an annual basis