The Luxembourg UCI industry thus registered a negative variation amounting to EUR 127.688 billion in December. This decrease represents the balance of the negative net issues of EUR 12.860 billion (- 0.31%) and the positive development in financial markets amounting to EUR 114.828 billion (-2.74%). 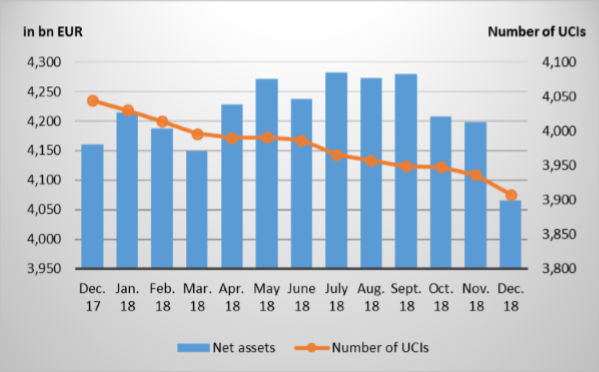 The number of undertakings for collective investment (UCIs) taken into consideration totalled 3,908 as against 3,936 in the previous month. A total of 2,536 entities adopted an umbrella structure, which represented 13,526 sub-funds. When adding the 1,372 entities with a traditional structure to that figure, a total of 14,898 fund units were active in the financial centre.

As regards, on the one hand, the impact of financial markets on the main categories of undertakings for collective investment and, on the other hand, the net capital investment in these UCIs, the following can be said about December.

All the categories of equity UCIs recorded negative developments during the month under review due, among others, to the fear of a global economic slowdown.

As regards developed countries, the European equity UCIs registered in this context a very strong negative performance against the backdrop of disappointing growth figures in Europe and persistent political uncertainties. The signs of deceleration of the US economy and the fourth raise of key interest rates by the Fed this year account for the decrease of US equity UCIs. Based on weaker economic indicators in Japan and on the unfavourable global economic environment, the category of Japanese equity UCIs also ended the month in negative territory.

As regards emerging countries, the Eastern European, Latin American and Asian equity UCI categories followed the overall downward trend in a context of a less favourable global economic environment despite the temporary trade agreement between China and the United States and the growth stabilisation measures taken by the Chinese authorities.

Development of equity UCIs during the month of December 2018*

In Europe, volatilities in equity markets, worries about the global economic environment and political uncertainties led to the rise in prices of high-rated government bonds which were sought by investors as ‘safe haven’, whereas risk premiums increased overall for private sector bonds. All in all, EUR-denominated bond UCIs recorded slight price increases.

The category of emerging country bond UCIs changed little due to, on the one hand, solid fundamentals and reduced US bond yields and, on the other hand, the negative development of some emerging currencies and the weak commodity markets.

Development of fixed-income UCIs during the month of December 2018* 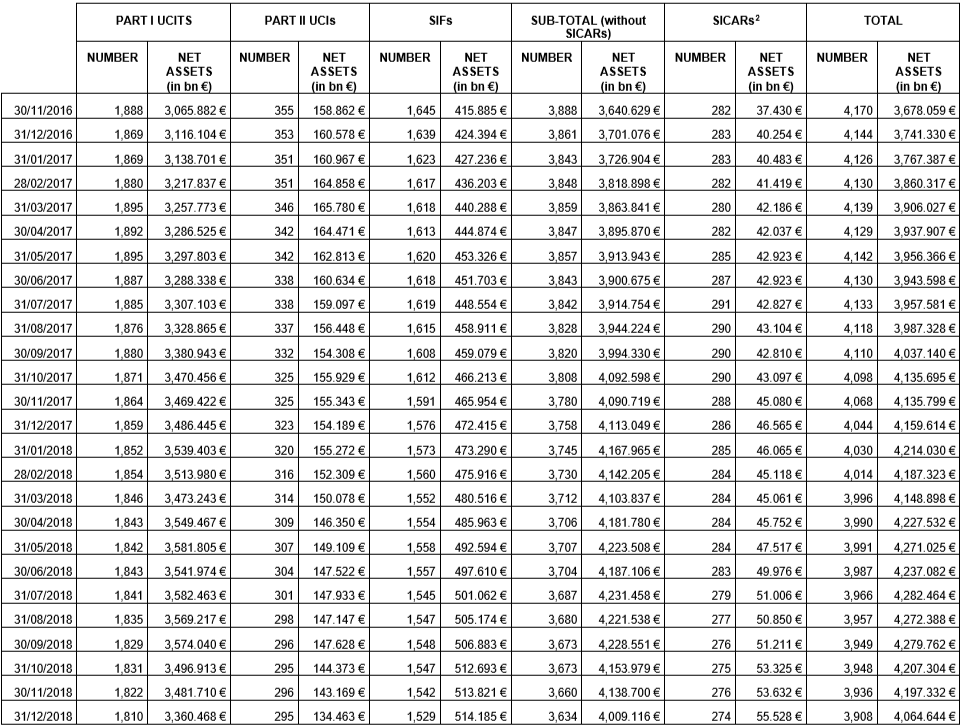 The following 38 undertakings for collective investment and specialised investment funds were deregistered from the official list during the month under review: