The Luxembourg UCI industry thus registered a positive variation amounting to EUR 62.931 billion in February. This increase represents the balance of negative net issues of EUR 7.096 billion (-0.17%) and the positive development in the financial markets amounting to EUR 70.027 billion (+1.67%). 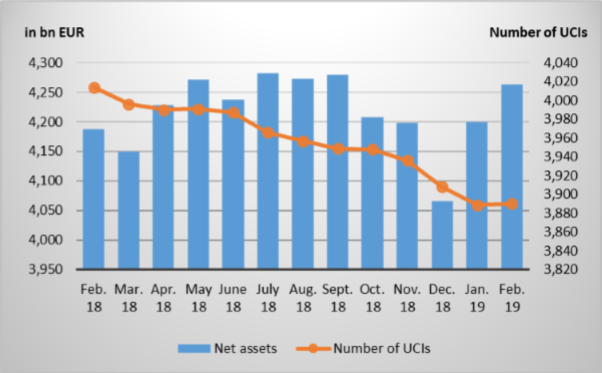 The number of undertakings for collective investment (UCIs) taken into consideration totalled 3,890 as against 3,889 in the previous month. A total of 2,523 entities adopted an umbrella structure, which represented 13,558 sub-funds. When adding the 1,367 entities with a traditional structure to that figure, a total of 14,925 fund units were active in the financial centre.

As regards, on the one hand, the impact of financial markets on the main categories of undertakings for collective investment and, on the other hand, the net capital investment in these UCIs, the following can be said about February.

As regards developed countries, the category of European equity UCIs recorded a positive performance due notably to the maintenance of the accommodating monetary policy by the European Central Bank and the progress made in the trade negotiations between the United States and China and that, despite mitigated macroeconomic data in the euro area and the slowdown in world trade. The category of US equity UCIs registered an increase as a result of the progress in trade negotiations between China and the US which led to a postponement in new customs surcharges on Chinese products and the political agreement ending the shutdown of the US government. Based on the progress in trade negotiations between China and the US and the weakness of the YEN compared to the USD, the category of Japanese equity UCIs ended the month in positive territory despite the decline of the Japanese foreign trade.

As regards emerging markets, the Asian equity UCIs recorded overall a positive performance, mainly based on progress in trade negotiations between China and the US, despite the divergent developments in the different Asian countries. In the context of a less favourable global macroeconomic environment, the Eastern European equity UCIs and the Latin American UCIs recorded price losses.

Development of equity UCIs during the month of February 2019*

In Europe, corporate bonds registered price gains in the context, notably, of the rise in risk appetite, whereas the EUR-denominated government bond yields slightly increased. The maintenance of the accommodating policy by the European Central Bank against the background of weaker macroeconomic data in the euro area and the prospect of a new cycle of longer-term refinancing operations for banks supported the prices of EUR-denominated bonds so that, overall, the EUR-denominated bond UCIs recorded a positive perfomance.

In the United States, although the USD-denominated government bond yields remained relatively flat during the month under review, owing notably to the careful choice of words of the American Federal Reserve as to the future orientation of its monetary policy, the appreciation of the USD against the EUR resulted in the USD-denominated bond UCIs ending the month in positive territory.

Development of fixed-income UCIs during the month of February 2019* 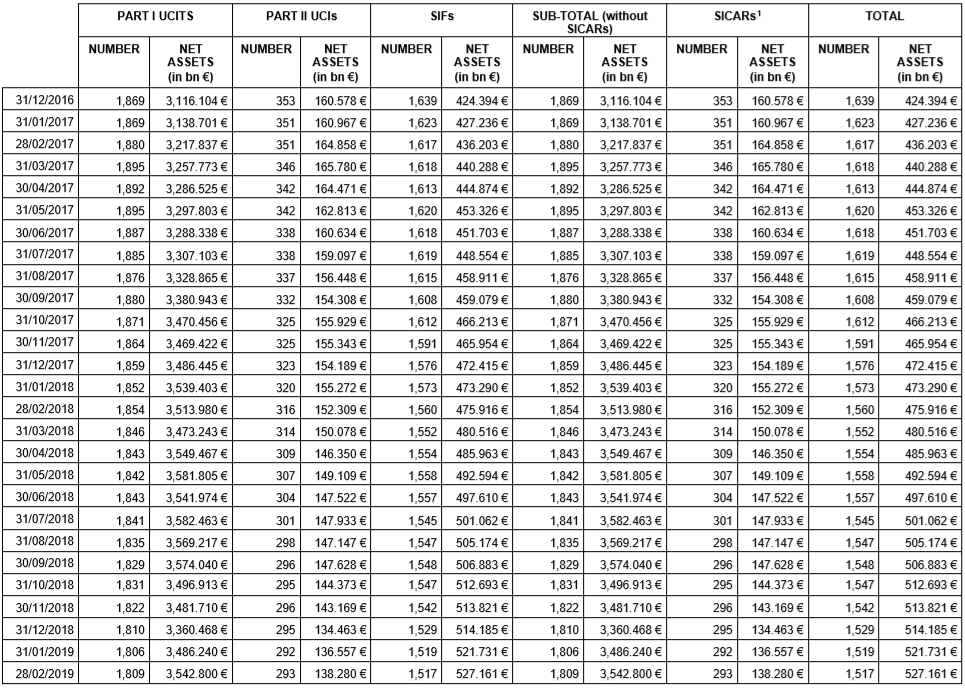 The following 10 undertakings for collective investment have been deregistered from the official list during the month under review: