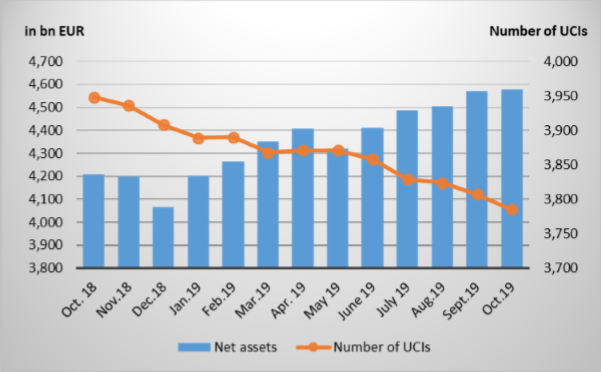 The number of undertakings for collective investment (UCIs) taken into consideration totalled 3,785 as against 3,807 in the previous month. A total of 2,482 entities adopted an umbrella structure, which represented 13,545 sub-funds. When adding the 1,303 entities with a traditional structure to that figure, a total of 14,848 fund units were active in the financial centre.

As regards, on the one hand, the impact of financial markets on the main categories of undertakings for collective investment and, on the other hand, the net capital investment in these UCIs, the following can be said about October.

The more accommodating monetary policies announced by the main central banks and the progress made in the Sino-American trade negotiations dominated the financial markets, driving all stock markets upwards.

As far as developed countries are concerned, the European equity UCI category recorded a positive performance following the first signs of stabilisation of macroeconomic figures in Europe and the progress made in the negotiations between China and the United States and those linked to Brexit. Despite US equity markets performing positively, mostly as a consequence of better-than-expected corporate results, of a lessening of the trade tensions between the USA and China and of the decrease of the key interest rates by the US Federal Reserve (FED), the USD vs. EUR depreciation made US equity UCIs finish the month negatively. The Japanese equity UCIs developed positively as a result of the improving Sino-American trade relations, notwithstanding mitigated economic indicators in Japan.

As far as emerging countries are concerned, the Asian equity UCI category recorded an overall price increase linked to the appeasing trade tensions between China and the United States despite a growth slowdown in China and the current geopolitical problems in the region. Notwithstanding heterogeneous developments in the different Eastern European and Latin American countries, the equity UCI categories of Eastern Europe and of Latin America globally followed the rising trend.

Development of equity UCIs during the month of October 2019*

In October, the renewed interest of investors in riskier assets implied an increase in the yields of government bonds in the euro area, whereas the yields of corporate bonds only slightly changed. This increase in yields, entailing a decrease in sovereign bond prices, explains the negative performance of the EUR-denominated bond UCIs for the month under review.

Although the prices of emerging markets bonds remained relatively stable as a whole – despite the idiosyncratic risks which affected certain specific countries – the depreciation of some emerging currencies and of the USD vs the EUR made emerging country bond UCIs finish the month negatively.

Development of fixed-income UCIs during the month of October 2019* 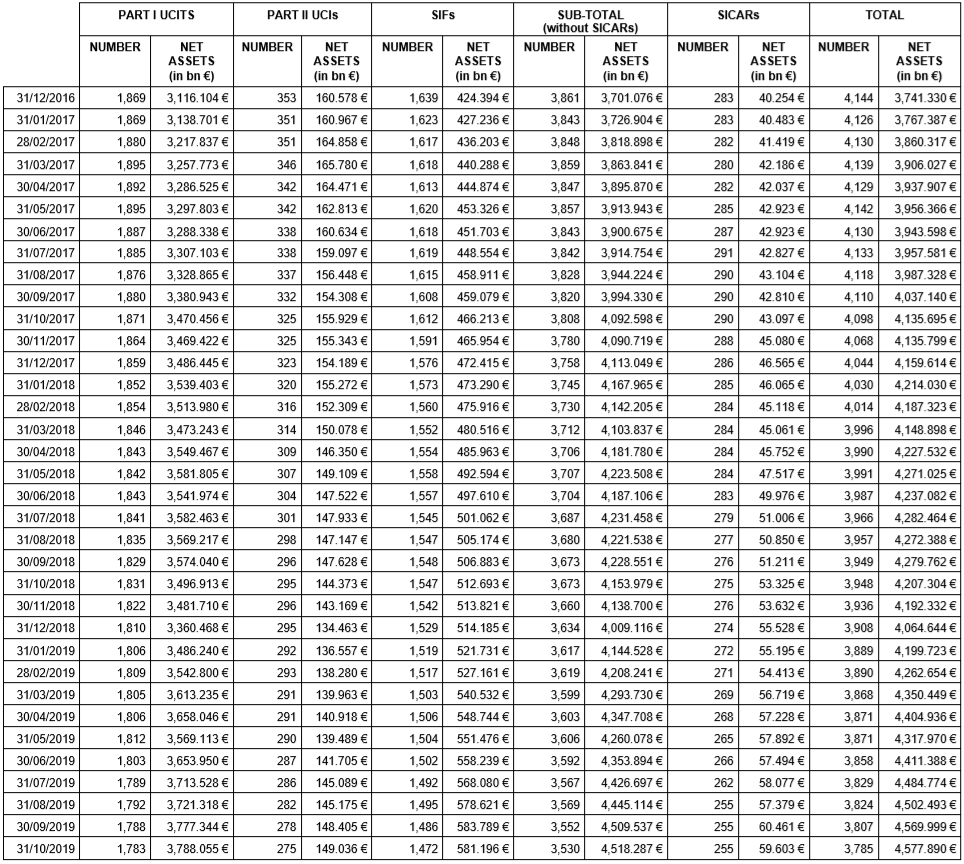