The Luxembourg UCI industry registered a negative variation amounting to EUR 121.084 billion during the month of February. This decrease results from the balance of positive net issues of EUR 13.284 billion (+0.28%) and a negative development in financial markets of EUR 134.368 billion (2.81%). 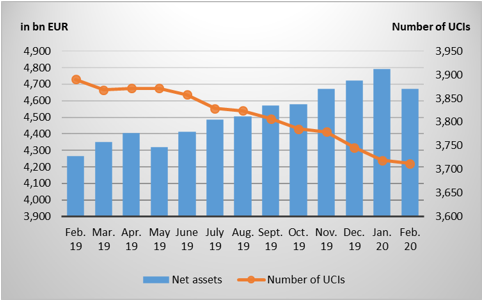 The number of undertakings for collective investment (UCIs) taken into consideration totalled 3,712 as against 3,719 in the previous month. A total of 2,432 entities adopted an umbrella structure, which represented 13,518 sub-funds. When adding the 1,280 entities with a traditional structure to that figure, a total of 14,798 fund units were active in the financial centre.

As regards, on the one hand, the impact of financial markets on the main categories of undertakings for collective investment and, on the other hand, the net capital investment in these UCIs, the following can be said about January.

The spread of the coronavirus outside China and the attendant risks for the global growth depressed the financial markets, with all equity UCI categories decreasing.

As far as developed countries are concerned, the European equity UCI category slipped into the red amid fear that the epidemic could plunge the euro area economies into recession in a context of fragile macroeconomic figures. Concerns among investors about the risks of global spread of the coronavirus for international supply chains and global growth have manifested themselves in price losses in US equity UCIs. Within the context of COVID-19 and disappointing Japanese macroeconomic figures in the fourth quarter, Japanese equity UCIs recorded a highly negative performance during the month under review.

In respect of emerging countries, concerns regarding the possible impact that the spread of the coronavirus epidemic could have on the global growth, the fall in raw material prices, the depreciation of most emerging currencies as well as specific problems of some emerging countries account for the heavy losses in Eastern European and Latin American equity UCIs. All in all, Asian equity UCIs registered a more moderate price decline, mainly due to the slowing of the epidemic spread in China and to the support measures initiated by the Chinese government.

Development of equity UCIs during the month of February 2020*

Emerging countries bond UCIs depreciated in the face of investors’ preferences for safe-haven assets, the rise in risk premiums and the depreciation of most emerging currencies.

In February, fixed-income UCIs registered an overall positive net capital investment. It should be noted that USD-denominated money market funds experienced large redemptions during the month under review.

Development of fixed-income UCIs during the month of February 2020* 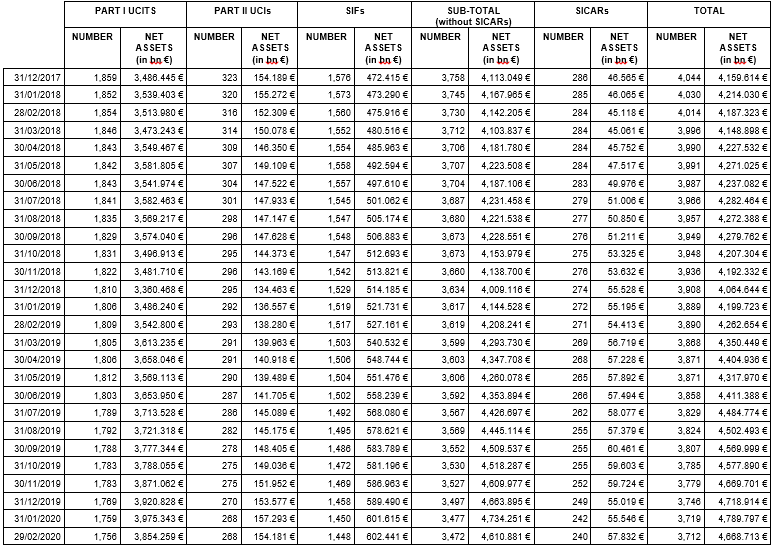 The following 18 undertakings for collective investment have been deregistered from the official list during the month under review: