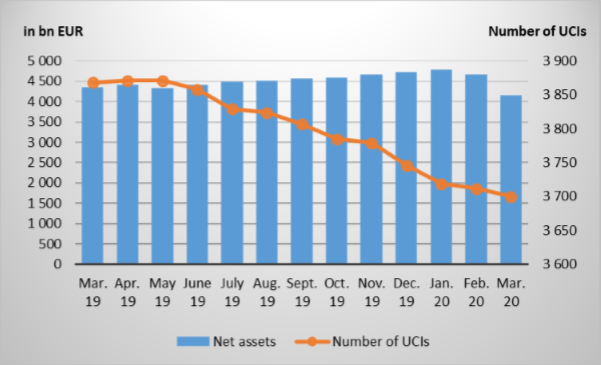 The number of undertakings for collective investment (UCIs) taken into consideration totalled 3,700 as against 3,712 in the previous month. A total of 2,426 entities adopted an umbrella structure, which represented 13,496 sub-funds. When adding the 1,274 entities with a traditional structure to that figure, a total of 14,770 fund units were active in the financial centre.

The coronavirus pandemic and its negative impacts on the global economic activity largely dominated the financial markets which resulted in significant price losses on global equity and bond markets. In this context, most governments and central banks throughout the world have implemented substantial budget support and monetary easing to mitigate the impact of the health crisis on the global economic conditions and financial stability.

As far as developed countries are concerned, price losses were particularly pronounced in the categories of European and US equity UCIs. The support programme of the Japanese central bank for the stock market allowed the category of Japanese equity UCIs to end the month with less significant decreases.

Although all categories of emerging market equity UCIs also recorded significant decreases in this context, losses were particularly strong for the categories of Eastern European and Latin American equity UCIs in an environment characterised particularly by significant price losses of the main commodities and especially the oil price which fell following the disagreement between the countries exporting oil (members of the OPEC) and Russia on a limitation of their production. The drop of most of the emerging country currencies of these regions further exacerbated this decrease.

During March, the categories of equity UCIs registered a relatively large negative net capital investment, the highest net redemptions were recorded by the category of Japanese equity UCIs.

Development of equity UCIs during the month of March 2020*

On both sides of the Atlantic, the coronavirus pandemic and its negative impacts on the global economic activity resulted in significant price losses throughout the different segments of the bond market. Corporate bonds were more affected with significant increases in risk premiums. In a context of a high risk aversion of investors and a decline in liquidity at the level of bond markets, the implementation by the Fed and the European Central Bank of substantial monetary easing measures enabled the stabilisation of bond markets and sustained also the prices of high-rated government bonds. Overall, the EUR- and USD-denominated bond UCIs recorded, in the context of these developments, sharp price falls during the month under review.

The category of emerging market bond UCIs registered a highly negative performance in a context marked by the spread of the coronavirus and the increased risk aversion of investors, resulting in the capital outflow from emerging countries, the increase in risk premiums and the accentuated depreciation of most of the emerging currencies.

Development of fixed-income UCIs during the month of March 2020*

Diversified income UCIs and funds of funds have also experienced strong price losses in this context. The development of net assets of these UCIs is illustrated in the table below: 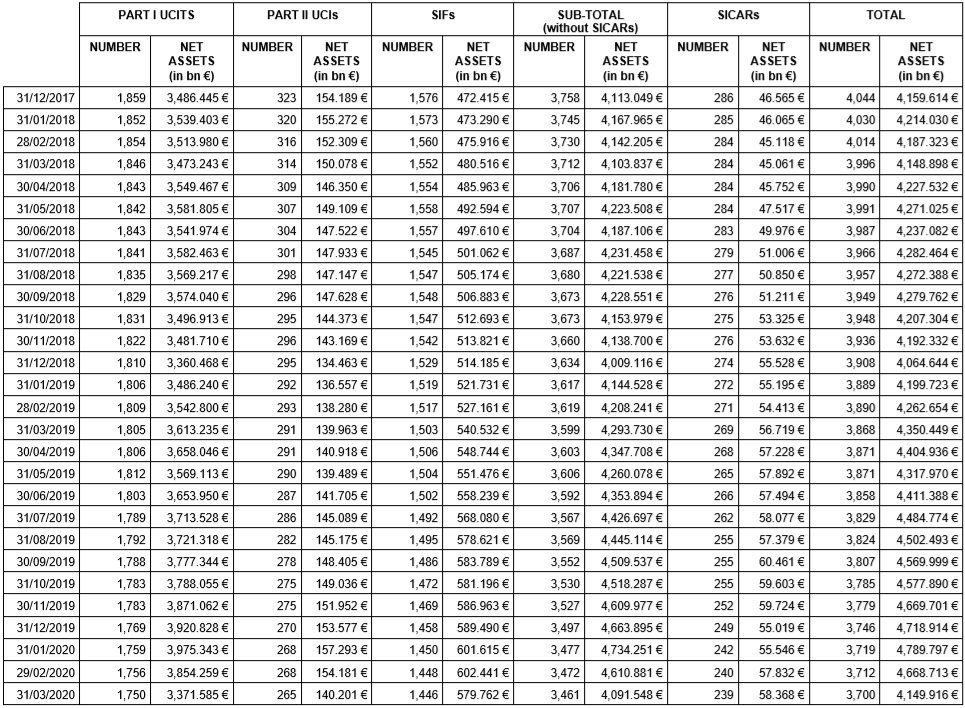