Consequently, the Luxembourg UCI industry registered a positive variation of EUR 253.767 billion in April. This increase represents the balance of positive net issues of EUR 42.882 billion (+1.03%) and a positive development in financial markets amounting to EUR 210.885 billion (+5.08%). 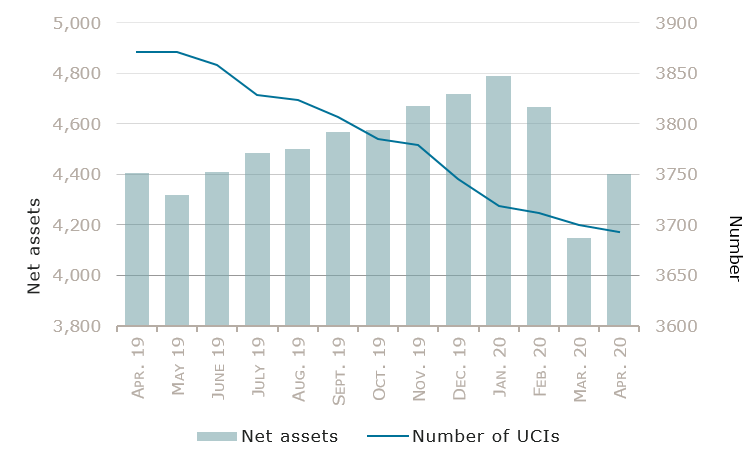 The number of undertakings for collective investment (UCIs) taken into consideration totalled 3,693 as against 3,700 in the previous month. A total of 2,422 entities adopted an umbrella structure, which represented 13,449 sub-funds. When adding the 1,271 entities with a traditional structure to that figure, a total of 14,720 fund units were active in the financial centre.

Following the significant financial market downturn in March due to the coronavirus pandemic and its negative impacts on the global economy, the exceptional support measures taken by most governments and central banks worldwide to stabilise the economy and financial markets, together with the lifting of the lockdown measures announced in several countries, resulted in a significant upward of stock prices in April, raising all UCI categories.

As far as developed countries are concerned, European and US equity UCIs recorded a significant positive performance due in part to the fiscal and monetary support measures, notwithstanding economic activities and leading economic indicators on the downside. The potentially easing of the lockdown measures in Europe in view of the drop in new infections has also supported the European stock exchanges. While the Japanese share prices increased less significantly, partly on account of the spread of the virus in Japan and the state of public health emergency declared by the Japanese government, the appreciation of the JPY against the EUR sustained the Japanese equity UCIs which recorded a significant rise during the month under review.

As for emerging countries, Asian equity UCIs ended the month up, mainly driven by the coronavirus spread slowing in many Asian countries. Overall, Eastern European and Latin American equity UCI categories followed that strong upward trend, despite the drop in oil prices and divergent pandemic developments in various countries of these regions.

On both sides of the Atlantic, the asset buy-back programmes of the ECB and the US Federal Reserve permitted supporting bond market liquidity and pulled the prices of high-rated government bonds up. These buy-back programmes, together with the renewed risk appetite of investors, also fuelled the rise in corporate bond prices, even though the credit risk increased against the background of the health crisis. Bonds from peripheral countries of the euro area have not been able to take advantage of this upward trend, in particular owing to the lack of progress in the discussions on the euro area sovereign-debt pooling. In this context, categories of EUR and USD-denominated bond UCIs appreciated.

In this context, diversified UCIs and funds of funds showed a rebound in prices. The development of net assets of these UCIs is illustrated in the table below: 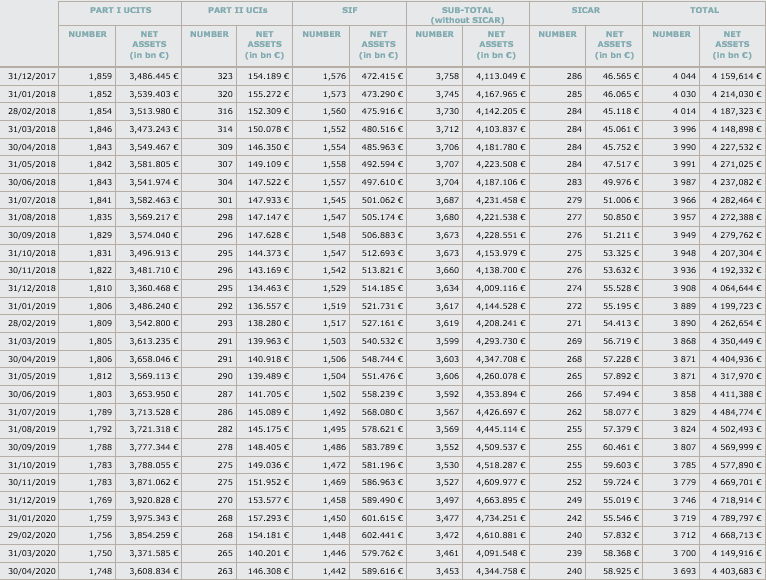 Breakdown of the number and net assets of UCIs (PDF)

The following 13 undertakings for collective investment have been deregistered from the official list during the month under review: