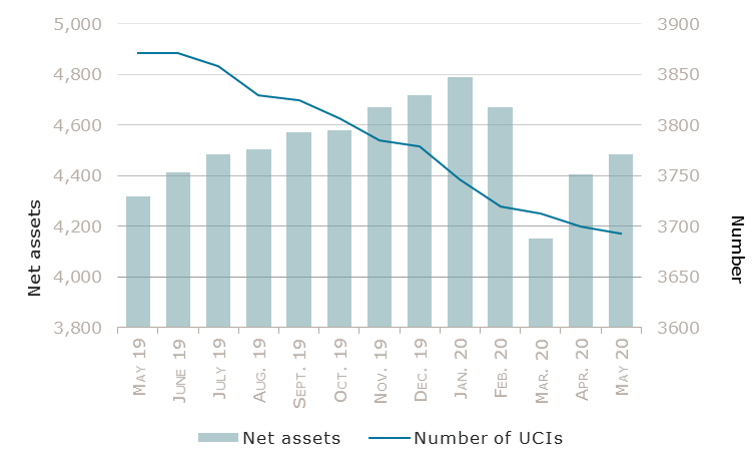 The number of undertakings for collective investment (UCIs) taken into consideration totalled 3,686 as against 3,693 in the previous month. A total of 2,414 entities adopted an umbrella structure, which represented 13,455 sub-funds. When adding the 1,272 entities with a traditional structure to that figure, a total of 14,727 fund units were active in the financial centre.

Following the rebound of stock prices in April, equity markets recorded an overall positive trend during the month under review, influenced, notably, by the easing of the lockdown measures which has begun in many developed countries and by the monetary and budgetary support policies. This positive trend has led to decreased volatility in financial markets and to an improvement in bond market liquidity, without achieving to revert to pre-crisis levels.

As far as developed countries are concerned, the European, US and Japanese equity UCI categories have recorded a significant positive performance owing to the budgetary support measures, the continuity of accommodating monetary policies and the gradual easing of the lockdown measures initiated in many developed countries, despite the negative impacts of the health crisis on the economic activity, leading to rather bleak economic indicators as a whole.

As for emerging countries, Eastern European and Latin American equity UCI categories have, globally, followed this rising trend, supported by increasing oil and other raw material prices. However, an opposite trend has been registered for Asian equity UCIs, which ended the month in negative territory, mainly as a consequence of the resurfacing tensions between the US and China as well as the conflicts linked to the situation in Hong Kong.

Development of equity UCIs during the month of May 2020*

In the euro area, the easing of the lockdown restrictions in many countries following the decline in new COVID-19 cases and a reduced number of downgrades of companies to speculative grade resulted in a renewed interest in risky assets, leading to falling prices for high-rated government bonds and fostering price increases for corporate bonds, associated with a reduction in risk premiums. The prices of low-rated euro-area government bonds also appreciated, supported by the perspective of a large economic recovery plan (“Next Generation EU”) which has been announced by the European Commission. As a consequence, EUR-denominated bond UCIs ended the month in positive territory during the month under review.

In the United States, government bonds remained relatively stable during the month under review due to the stabilising effect of the asset buy-back programme of the Federal Reserve, whereas corporate bonds recorded price increases as a consequence of renewed investor risk appetite. USD-denominated bond UCIs thus recorded price increases for the month of May, partly compensated by the depreciation of the USD against the EUR.

Development of fixed-income UCIs during the month of May 2020* 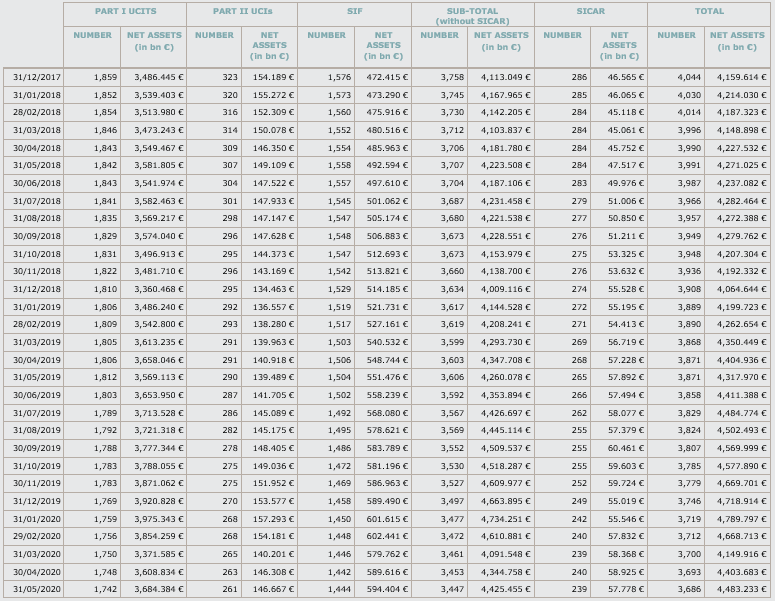 The following 16 undertakings for collective investment have been deregistered from the official list during the month under review: