The Luxembourg UCI industry thus registered a positive variation amounting to EUR 101,963 billion in June. This increase represents the sum of positive net capital investments of EUR 36,447 billion (+0,81%) and of the positive development of financial markets amounting to EUR 65,516 billion (+1,46%). 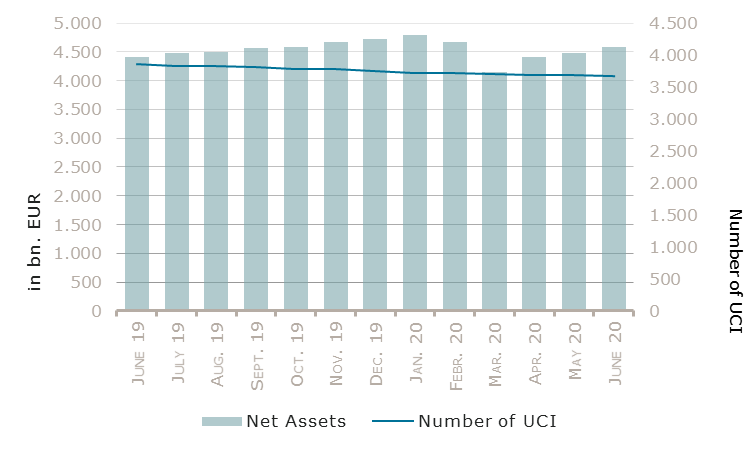 The number of undertakings for collective investment (UCIs) taken into consideration totalled 3.669, as against 3.686 the previous month. A total of 2.402 entities adopted an umbrella structure representing 13.445 sub-funds. Adding the 1.267 entities with a traditional UCI structure to that figure, a total of 14.712 fund units were active in the financial centre.

As regards, on the one hand, the impact of financial markets on the main categories of undertakings for collective investment and, on the other hand, the net capital investment in these UCIs, the following can be said for the month of June:

Equity markets continued to develop positively, mainly supported by the global easing of lockdown measures, the extension of monetary and budgetary policy measures and better economic indicators. These movements did profit the equity UCI categories in the developed and emerging market countries, the exception being the Japanese equity category for which the depreciation of the Yen against the EUR shifted the category into negative territory. The largest gains were recorded for the Asian and the Latin American equities, this despite a renewed intensification of the US-China tensions and divergent pandemic developments in various countries of Latin America.

In Europe, the extension (volume and duration) by the European Central Bank (ECB) of its pandemic emergency purchase program (PEPP), its targeted longer-term refinancing operations to euro area banks as well as the proposal for an EU-wide recovery fund supported the European bond market and profited notably to lower-rated Government bonds of peripheral countries pushing related yields lower. Prices also moved up for corporate bonds profiting from an increased demand in an overall positive market environment. As a consequence, EUR-denominated bond UCIs ended the month in positive territory.

In the United States, US Treasury yields remained overall stable in a context marked by resurgent risk appetite of investors. The purchase by the Federal Reserve (Fed) of U.S. corporate bonds since June supported that market segment pushing yields lower. On that basis, USD-denominated bond UCIs recorded an overall value increase, partly compensated by the depreciation of the USD against the EUR.

The emerging markets UCI category further recovered in a positive market environment with renewed appetite for riskier assets, reduced risk premiums on these bonds and reductions of key interest rates by many central banks of emerging countries, despite idiosyncratic risks persisting in some emerging economies. 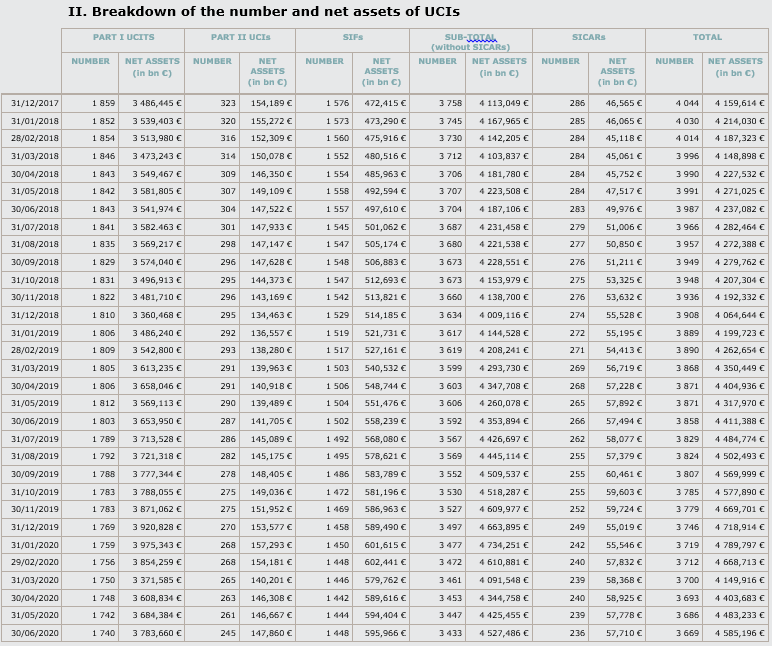 The following twenty-seven undertakings for collective investment have been deregistered from the official list during the month under review: