The Luxembourg UCI industry thus registered a positive variation amounting to EUR 79.367 billion in August. This increase represents the sum of positive net capital investments of EUR 13.276 billion (+0.29%) and of the positive development of financial markets amounting to EUR 66.091 billion (+1.43%). 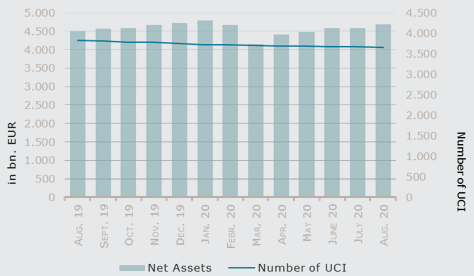 The number of undertakings for collective investment (UCIs) taken into consideration totalled 3,655, against 3,664 the previous month. A total of 2,396 entities adopted an umbrella structure representing 13,427 sub-funds. Adding the 1,259 entities with a traditional UCI structure to that figure, a total of 14,686 fund units were active in the financial centre.

Globally, a better-than-expected second-quarter earnings season in a context marked by the COVID-19 pandemic, sustained accommodative monetary policies among major central banks, rising hopes for a Covid-19 vaccine and the search for riskier assets by investors provided support for equity markets in August.

As far as developed countries are concerned, the European equity UCI category has registered positive returns amid better economic indicators, corporate earnings faring better than expected in Q2, the continuous monetary and budgetary support and the progress made in the development of a COVID-19 vaccine, despite of a resurgence in infection rates across several European countries. The US equity UCI category showed a strong performance on the month under review, mainly driven the better-than-expected earnings season, improved economic indicators and the adoption of an “average inflation target” by the US Federal Reserve (Fed) rising expectations of continued monetary support from the Fed. While the Japanese equity market rallied in August on the grounds of better economic data, a stabilisation of the infection rates in Japan and a continued expansive monetary policy, the depreciation of the Yen against the EUR partly reduced the gains of the Japanese equity UCI category.

As for emerging countries, the Asian equity UCI category enjoyed an overall positive performance aided by robust economic projections, the USD weakness and the prospect for a vaccine against the coronavirus. The Eastern European equity UCI category globally rose in August following from the positive returns generated in several equity markets of the region like Russia, Poland and the Czech Republic, amid improved global economic indicators, the rising energy prices and the authorisation of a COVID-19 vaccine in Russia. While August saw mixed developments in Latin America’s equity markets, the negative performance in countries like Brazil and Chile in combination with the depreciation of some South American currencies pushed the Latin American equity UCI category globally into negative territory.

On both sides of the Atlantic, the yields of highly rated government bonds increased in a context marked by better macroeconomic data, the progress made in the development of a vaccine against the coronavirus as well as expectations of higher long-term inflation in the US following from the Fed decision to switch from a fix to an average inflation target. Investment grade corporate bonds followed the upward movement in interest rates, but at the same time registered lower spreads amid an increased risk appetite. As a result of rising yields leading to negative returns on bond prices, the EUR-denominated and USD-denominated bonds UCI categories both saw a decline in August. 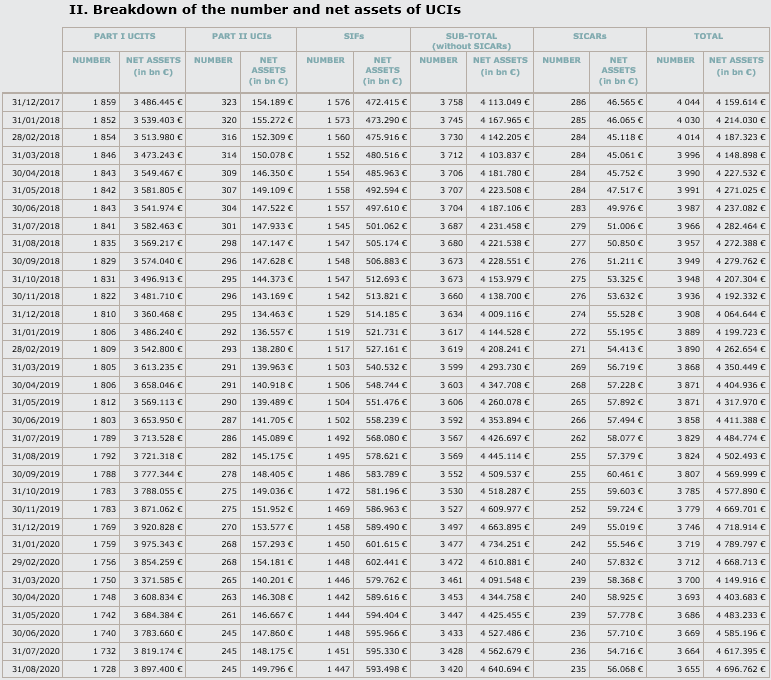 The following seventeen undertakings for collective investment have been deregistered from the official list during the month under review: