The Luxembourg UCI industry thus registered a positive variation amounting to EUR 158.196 billion in March. This increase represents the sum of positive net capital investments of EUR 46.758 billion (+0.92%) and of the positive development of financial markets amounting to EUR 111.438 billion (+2.19%). 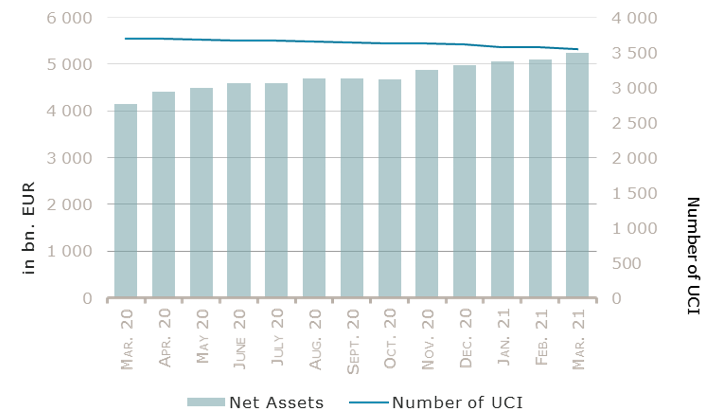 The number of undertakings for collective investment (UCIs) taken into consideration totalled 3,554, against 3,570 the previous month. A total of 2,347 entities adopted an umbrella structure representing 13,341 sub-funds. Adding the 1,207 entities with a traditional UCI structure to that figure, a total of 14,548 fund units were active in the financial centre.

As regards the impact of financial markets on the main categories of undertakings for collective investment and the net capital investment in these UCIs, the following can be said for the month of March:

Concerning developed markets, the European equity UCI category gained under the impulse of positive macroeconomic indicators amid hopes of global economic recovery, the preparation of the “Next Generation EU” fund and the European Central Bank (ECB) signalling an extended accommodative monetary policy, despite growing infection rates and concomitant regional lockdowns as well as a slow vaccine roll-out in the EU. A rapid deployment of the COVID19 vaccines in the US, improved economic indicators, the prospect of extensive fiscal stimulus packages as well as the appreciation of the USD against the EUR shifted the US equity UCI category into positive territory. The Japanese equity UCI category rose as well during the month of March on the basis of robust economic data and the continued low interest rate policy of the Bank of Japan (BOJ).

As for emerging countries, the Asian equity UCI category overall registered a negative performance amid rising bond yields in the United States making investments in emerging markets less attractive, a slight weakening of the growth dynamic in China as well as profit-taking operations in Chinese equity markets. The Eastern European equity UCI category gained on the grounds notably of better macro data and increasing oil prices, supporting the Russian equity market as well as the Polish and Czech equity markets. The Latin American equity UCI category generated a robust return driven by higher commodity prices and improved economic prospects in global, notwithstanding political uncertainties in Brazil, inflation problems in Mexico and a diverging development of emerging market currencies.

For the month under review, the yields of government bonds continued increasing on both sides of the Atlantic.

As for EUR-denominated government bonds, against the background of rising infection rates in Europe and the announcement of the European Central Bank to extend its Pandemic Purchase Emergency Program (PEPP) in order to keep the financing cost for European corporates at a low level, the yields of European government bonds only slightly increased (i.e. bond prices decreased) whereas the yields of investment grade corporate bonds moved sideways while their risk premiums slightly compressed. Overall the performance of the EUR-denominated bond UCI category remained virtually flat.

Concerning the USD-denominated bond UCI category, the substantial fiscal and infrastructure programs planned by the US government led to higher growth and inflation anticipations and as a result to rising long-term US government bonds yields, in spite of the US Federal Reserve (FED) signalling a continued loose monetary policy. While US corporate bond yields followed this upward trend, the strong appreciation of the USD against the EUR nevertheless shifted the USD-denominated bond UCI category into positive territory.

The Emerging market bond UCI category saw a small gain in the month under review, around the rising yields in the United States, idiosyncratic risks in some emerging markets and a divergent evolution of emerging market currencies. 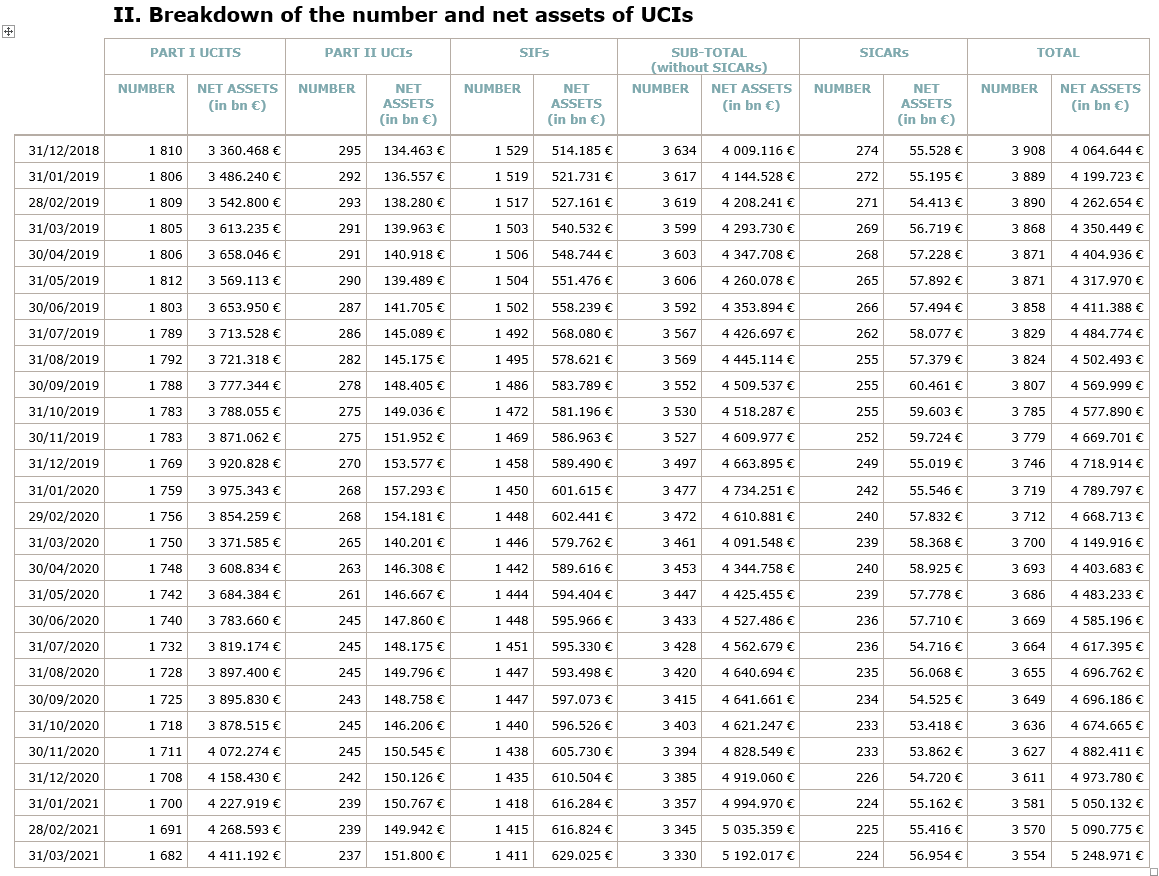 During the month under review, the following two undertakings for collective investment have been registered on the official list:

[1] Undertaking for collective investment for which the designated management company was authorised by the competent authorities of another Member State in accordance with Directive 2009/65/EC.