The Luxembourg UCI industry thus registered a positive variation amounting to EUR 155.134 billion in May. This increase represents the sum of positive net capital investments of EUR 47.881 billion (+0.90%) and of the positive development of financial markets amounting to EUR 107.253 billion (+2.01%). 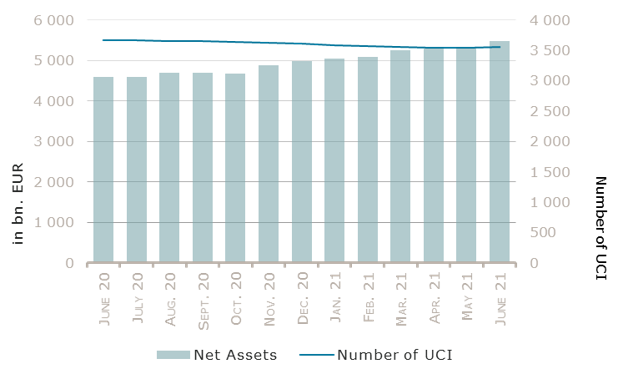 The number of undertakings for collective investment (UCIs) taken into consideration totalled 3,554, against 3,547 the previous month. A total of 2,341 entities adopted an umbrella structure representing 13,248 sub-funds. Adding the 1,213 entities with a traditional UCI structure to that figure, a total of 14,461 fund units were active in the financial centre.

As regards the impact of financial markets on the main categories of undertakings for collective investment and the net capital investment in these UCIs, the following can be said for the month of June:

Concerning developed markets, the European equity UCI category recorded a positive performance in a context marked by good macroeconomic data, the European Commission signing off on the first recovery plans from EU member states which will receive funding from the Next Generation EU fund and the steady progress made in the vaccination rollout across the EU. The US equity UCI category rallied in June on the back of improved macroeconomic perspectives, the ongoing monetary policy support of the US Federal Reserve (Fed) despite some concerns relating to the evolution of inflation figures as well as the appreciation of the USD against the EUR. Benefiting from a weakening of the yen against the USD which provided some support for export-oriented Japanese companies and the continued monetary policy support measures of the Bank of Japan, the Japanese equity UCI category finished the month in positive territory.

As for emerging countries, the Eastern European and Latin American equity UCI categories enjoyed strong gains in June, on the grounds of an improving macroeconomic outlook in these regions and increasing commodity prices. In comparison, the Asian equity UCI category realised smaller positive returns overall amid more mitigated macroeconomic data and the proliferation of the more contagious Delta variant in some Asian countries, while the ongoing accommodative monetary policies of the US Fed and the US infrastructure package, albeit limited in size, supported Asian equity markets.

Despite higher inflation rates on both sides of the Atlantic, the US Fed and ECB maintained for the time being their expansive monetary policies as they expect the high inflation levels to be temporary in nature. In this context, the ECB announced continuing and even extending its Pandemic Emergency Purchase Program (“PEPP”). Against this backdrop, the yields of government and corporate bonds fell (i.e. bond prices increased) and the EUR und USD-denominated bond UCI categories finished in positive territory, whereas the performance of the latter category was bolstered by the appreciation of the USD against the EUR. 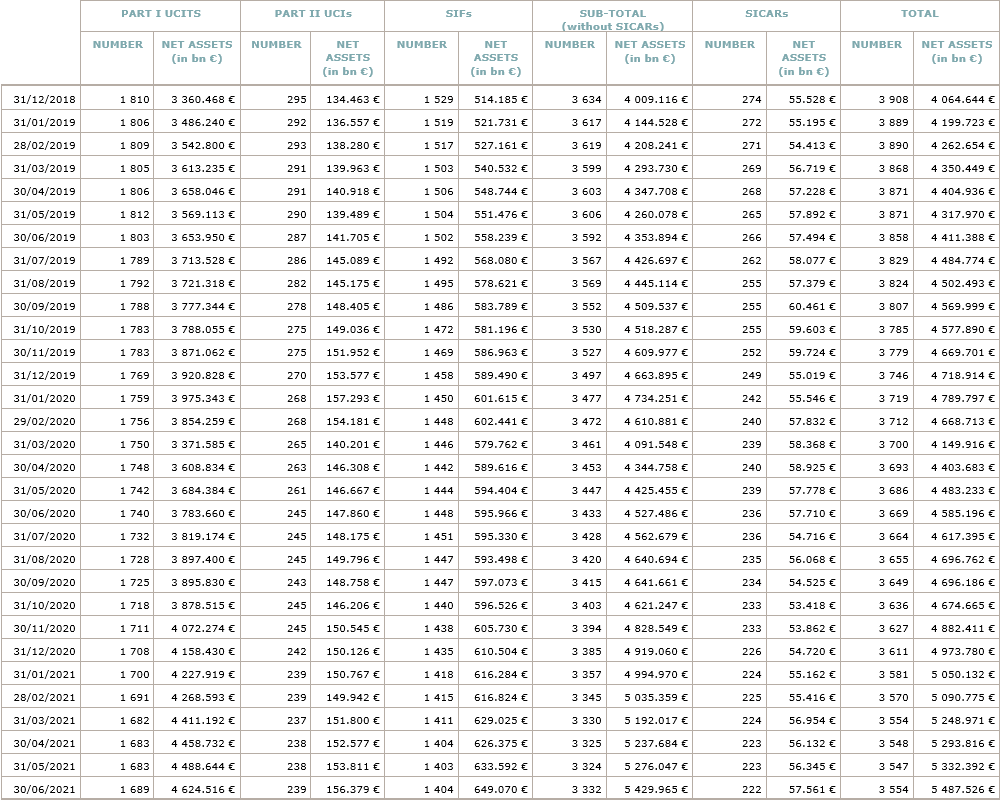 During the month under review, the following nineteen undertakings for collective investment have been registered on the official list:

The following twelve undertakings for collective investment have been deregistered from the official list during the month under review: