The Luxembourg UCI industry thus registered a positive variation amounting to EUR 12.293 billion in March. This increase represents the sum of negative net capital investments of EUR 14.871 billion (-0.27%) and of the positive development of financial markets amounting to EUR 27.164 billion (0.49%). 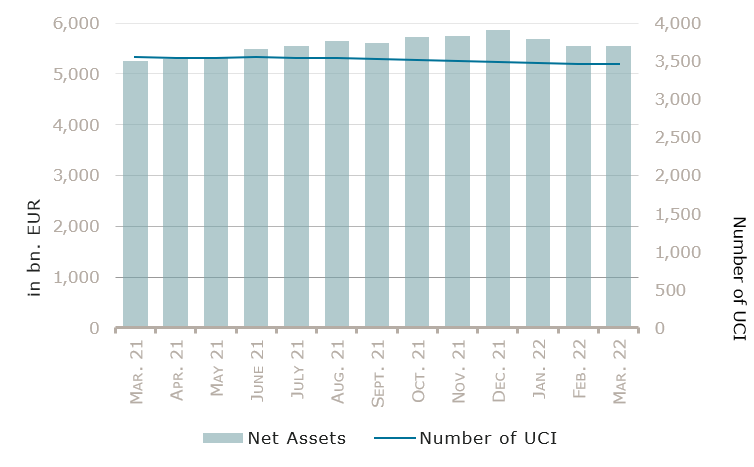 The number of undertakings for collective investment (UCIs) taken into consideration totalled 3,459, against 3,465 the previous month. A total of 2,266 entities adopted an umbrella structure representing 13,234 sub-funds. Adding the 1,193 entities with a traditional UCI structure to that figure, a total of 14,427 fund units were active in the financial centre.

As regards the impact of financial markets on the main categories of undertakings for collective investment and the net capital investment in these UCIs, the following can be said for the month of March.

Despite the development of the Ukraine crisis, the volatility of commodity markets, the persistence of inflation concerns and the increasingly stricter monetary policy stances, the UCI equity categories of developed markets recovered and recorded a positive performance, while bond yields continued to rise.

Concerning developed markets, the European equity UCI category registered a positive performance, the PMI business survey exceeding expectations and the geopolitical risks being partly priced out despite Europe recording a deceleration in activity, a dropdown in consumer confidence and high inflation. The US equity UCI category rose in March amid an overall stable US global economic picture with well oriented economic indicators, US labour market and growth continuing to look robust while inflation anticipations remain elevated. The appreciation of the USD against the EUR strengthened the gains. Japanese equity markets followed the upward market trend but, due to the sharp depreciation of more than 4% of the YEN against the EUR, the Japanese equity UCI category finished the month in negative territory.

As for emerging countries, the Asian equity UCI category realised a negative performance, mainly driven by Chinese equity markets on grounds of new lockdowns due to the pandemic in some major cities, the slowdown in the property market and regulatory actions in some sectors. The Eastern European equity UCI category overall declined given the continuation of the Ukraine conflict and the effects of related sanctions, although some equity markets in Eastern Europe such as Poland and Czech Republic registered a recovery. The Latin American equity UCI continued to enjoy strong gains supported by higher commodity prices and the strengthening of domestic currencies.

Development of equity UCIs during the month of March 2022*

In March, following the persistent inflation figures and the increasingly restrictive monetary policy stances of major central banks, we could observe a rise in bond yields on both sides of the Atlantic.

Concerning the EUR denominated bond UCI category, the European Central Bank (ECB) announced that it expects to conclude its “Asset Purchase Program” (“APP”) by June 2022 and that it could raise interest rates in the second half of 2022, compared to 2023 in its previous communications. Against this backdrop, yields rose (i.e. bond prices fell) and overall, the EUR denominated bond UCI category realised a negative performance.

Concerning the USD denominated bond UCI category, the Federal Reserve (Fed) raised its rates by 0.25 percentage points to 0.5%, further indicating that other rate hikes could follow in order to restore price stability. As a result, the yield curve flattened and even partially inverted on longer maturities. Historically an inverted yield curve over a number of months is used as an indicator of potential recession. Investment grade bond spreads widened during the month and overall the USD denominated bond UCI category decreased.

Development of fixed income UCIs during the month of March 2022* 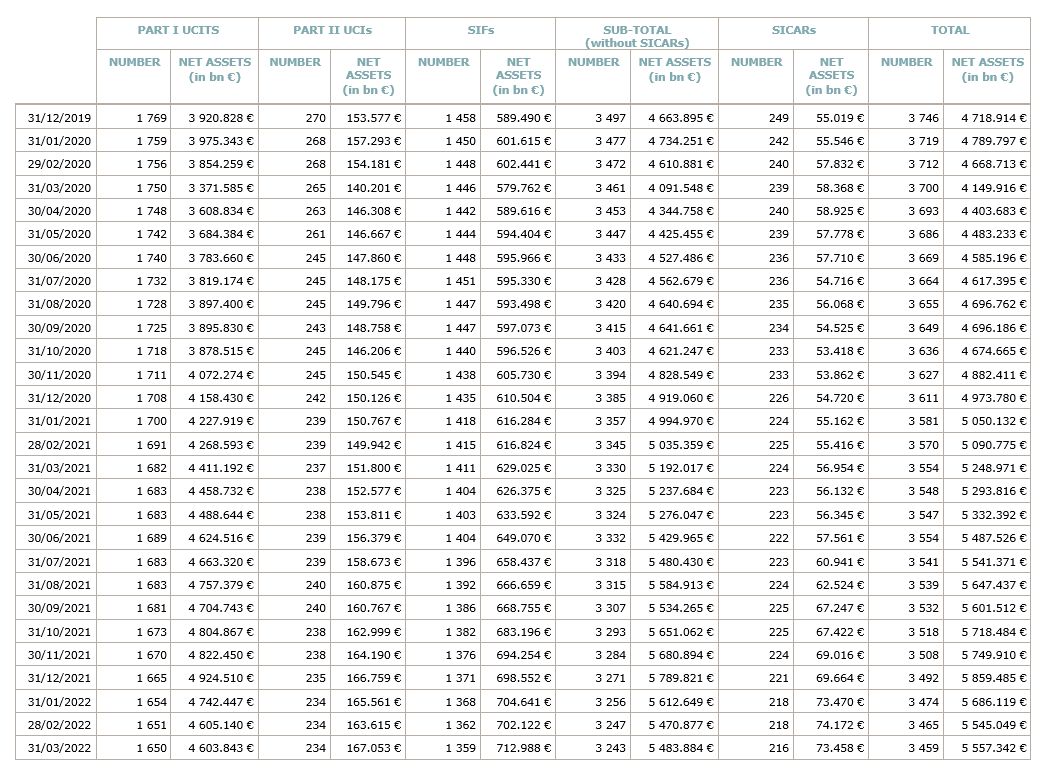