The Luxembourg UCI industry thus registered a negative variation amounting to EUR 198.231 billion in June. This decrease represents the sum of negative net capital investments of EUR 25.434 billion (-0.47%) and of the negative development of financial markets amounting to EUR 172.797 billion (-3.22%). 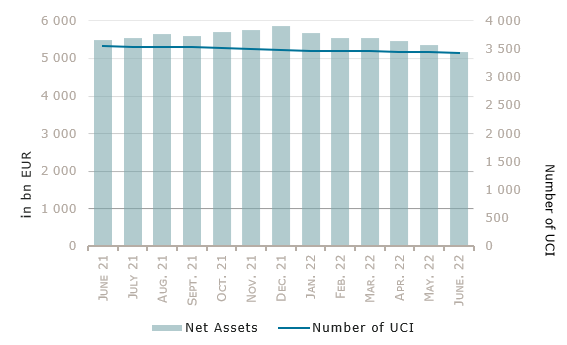 The number of undertakings for collective investment (UCIs) taken into consideration totalled 3,432, against 3,443 the previous month. A total of 2,248 entities adopted an umbrella structure representing 13,179 sub-funds. Adding the 1,184 entities with a traditional UCI structure to that figure, a total of 14,363 fund units were active in the financial centre.

As regards the impact of financial markets on the main categories of undertakings for collective investment and the net capital investment in these UCIs, the following can be said for the month of June.

Concerning developed markets, the European equity UCI category registered a negative performance amid a worsening of most economic indicators in Europe, a decline of consumer confidence and higher inflation. The US equity UCI category also saw a decline in June, as US consumer confidence worsened and activity decelerated in industry and service sectors, while inflation figures remained elevated and long-term interest rates continued to rise. The Japanese equity market fell against the background of worsening manufacturing indicators and the possibility of a US recession.

As for emerging countries, the Asian equity UCI category globally performed positively despite a divergent development in the region, mainly driven by better macroeconomic data in China, an easing of COVID-19 restrictions in China which helped reduce supply problems and the prospect for an easing of Chinese IT related regulation. The Eastern European equity UCI category fell on the back of the persisting geopolitical tensions resulting from the Ukraine crisis as well as of high inflation and rising interest rates weighting on equity prices. The Latin American equity UCI category suffered a steep decline in June, under the impulse of a fall in commodity prices from their recent highs, rising interest rates and weaker domestic currencies. The equity markets of Colombia, Peru and Brazil were among the weakest performers.

Development of equity UCIs during the month of June 2022*

Concerning the EUR denominated bond UCI category, yields increased (i.e. bond prices fell) amid the continuing tightening of monetary policy by the European Central Bank (“ECB”), high inflation figures and recession fears. While the spreads of lower-rated government bonds of peripheral countries decreased on news of a dedicated anti-fragmentation tool announced by the ECB and the use of flexible reinvestments in the context of the ECB pandemic emergency purchase programme (PEPP), investment grade corporate bond yields increased against a backdrop of inflation fears and gas shortages. Overall, the EUR denominated bond UCI category finished the month in negative territory.

On the other side of the Atlantic, USD bond yields increased in a context marked by the decision of the US Federal Reserve (“Fed”) to raise interest rates by 75 basis points and a widening of USD corporate bond spreads. The resulting decrease of USD bond prices, partly compensated by the appreciation of the USD against the EUR, shifted the USD denominated bond UCI category into negative territory.

Development of fixed income UCIs during the month of June 2022* 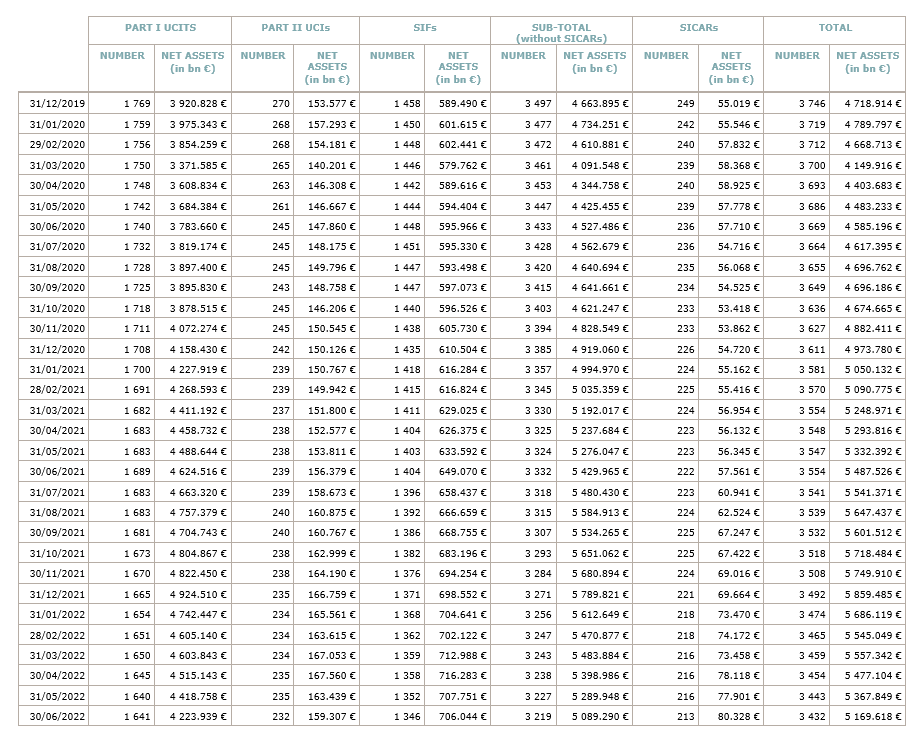