The number of undertakings for collective investment (UCIs) and specialised investment funds (SIFs) taken into consideration totalled 3,879 as against 3,869 in the previous month. A total of 2,559 entities have adopted an umbrella structure, which represents 12,859 sub-funds. When adding the 1,320 entities with a traditional structure to that figure, a total of 14,179 fund units are active in the financial centre.

As regards, on the one hand, the impact of financial markets on Luxembourg UCIs and SIFs (hereafter “UCIs”) and, on the other hand, the net capital investment in these UCIs, the following can be said about March 2016.

As far as developed countries are concerned, EU and US equity UCIs benefited from the new measures of monetary easing decided by the European Central Bank and from the more moderate perspective of an increase of key interest rates by the Fed, respectively, as well as from an encouraging economic environment on both sides of the Atlantic. Despite less favourable economic perspectives, the Japanese equity UCIs followed the upward trend of the markets.

As regards emerging countries, the publication of reassuring economic figures for China and the lower uncertainty in relation to the strategy of the Chinese Central Bank concerning the exchange rate supported the Asian equity UCIs. Despite economic, political and geopolitical problems some countries encountered, the Eastern European and Latin American equity UCIs appreciated with the sharp rise of oil prices and the strong appreciation of currencies of some big countries like Russia and Brazil.

Development of equity UCIs during the month of March 2016*

The new measures in monetary policy announced by the European Central Bank, together with an increase of the investors’ risk appetite, lead to a decrease of government bond yields and risk premiums of private sector bonds.
Consequently, EUR-denominated bond UCIs recorded price increases.

The communication of the Fed that the global economic environment justifies extreme caution of its policy of raising key interest rates positively influenced USD-denominated bond UCIs which recorded, in this context, price increases that were, however, compensated by the depreciation of the USD against the EUR by over 4%.
Due to the impact of the Fed’s decision not to raise the key interest rates and the increase in oil prices, the category of emerging countries bond UCIs developed positively considering the decline in risk premiums of these bonds.

Development of fixed-income UCIs during the month of March 2016* 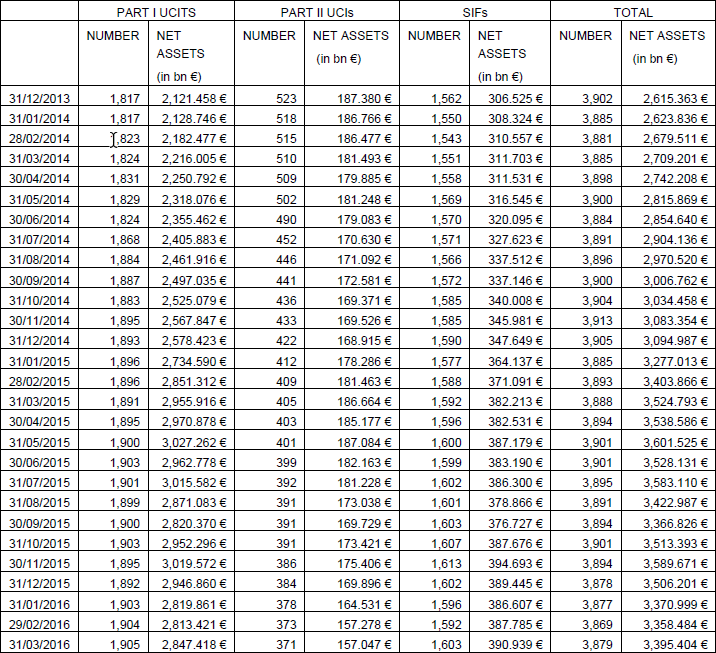 During March, the following 27 undertakings for collective investment and specialised investment funds have been registered on the official list:

The following 17 undertakings for collective investment and specialised investment funds have been deregistered from the official list during March: