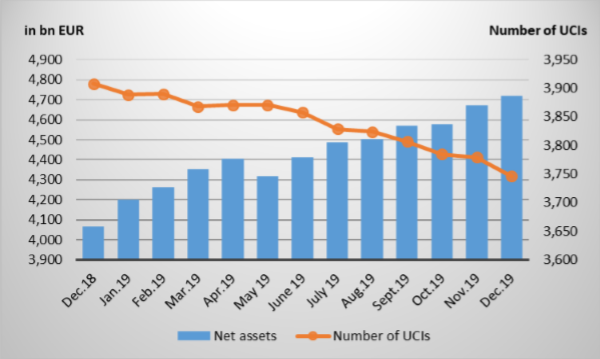 The number of undertakings for collective investment (UCIs) taken into consideration totalled 3,746 as against 3,779 in the previous month. A total of 2,452 entities adopted an umbrella structure, which represented 13,514 sub-funds. When adding the 1,294 entities with a traditional structure to that figure, a total of 14,808 fund units were active in the financial centre.

As regards, on the one hand, the impact of financial markets on the main categories of undertakings for collective investment and, on the other hand, the net capital investment in these UCIs, the following can be said about December.

The preliminary trade agreement reached between the United States and China dominated the financial markets in December, driving all equity UCI categories upwards.

As far as developed countries are concerned, this preliminary trade agreement and the strong likelihood of a Brexit with a withdrawal agreement following the elections in the UK have driven the rise in European equity UCIs, despite weak macroeconomic figures in Europe. The agreement in principle resulting from the Sino-American trade negotiations explains the price increases in the US equity UCI category, which were greatly offset by the depreciation of the USD vs. the EUR. Despite mitigated macroeconomic figures in Japan, the Japanese equity UCI category also recorded a positive performance mainly linked to the economic measures announced by the Japanese government and the appeased Sino-American trade tensions.  As far as emerging countries are concerned, Asian equity UCIs experienced overall price increases, mainly due to the progress made in the trade negotiations between China and the US and the better-than-expected economic indicators in China. The preliminary trade agreement between China and the US, the oil production reduction announced by OPEC and the appreciation of the RUB against the EUR supported an overall upward trend in the Eastern European equity UCI category, despite heterogeneous developments in the Eastern European stock markets. The sound performance of Latin American equity UCIs can be explained by the positive development of certain South-American stock markets, more accommodating monetary policies and the new free trade agreement between the US, Canada and Mexico (USMCA).

Development of equity UCIs during the month of December 2019*

In Europe, a renewed risk appetite in a context marked by the preliminary trade agreement concluded between the US and China, the lower political risk linked to Brexit following the UK elections and the continuation of an accommodating monetary policy brought along an increase in government bond yields. The yields of high-rated European corporate bonds remained relatively stable during the month under review, implying a price decrease for the EUR-denominated UCI bond category.

In the US, the rising risk appetite that followed the appeasement of trade tensions between China and the US resulted in an increase in long-term government bond yields, whereas US corporate bond yields decreased. However, the depreciation of the USD vs. the EUR negatively impacted the USD-denominated bond UCIs.

Development of fixed-income UCIs during the month of December 2019* 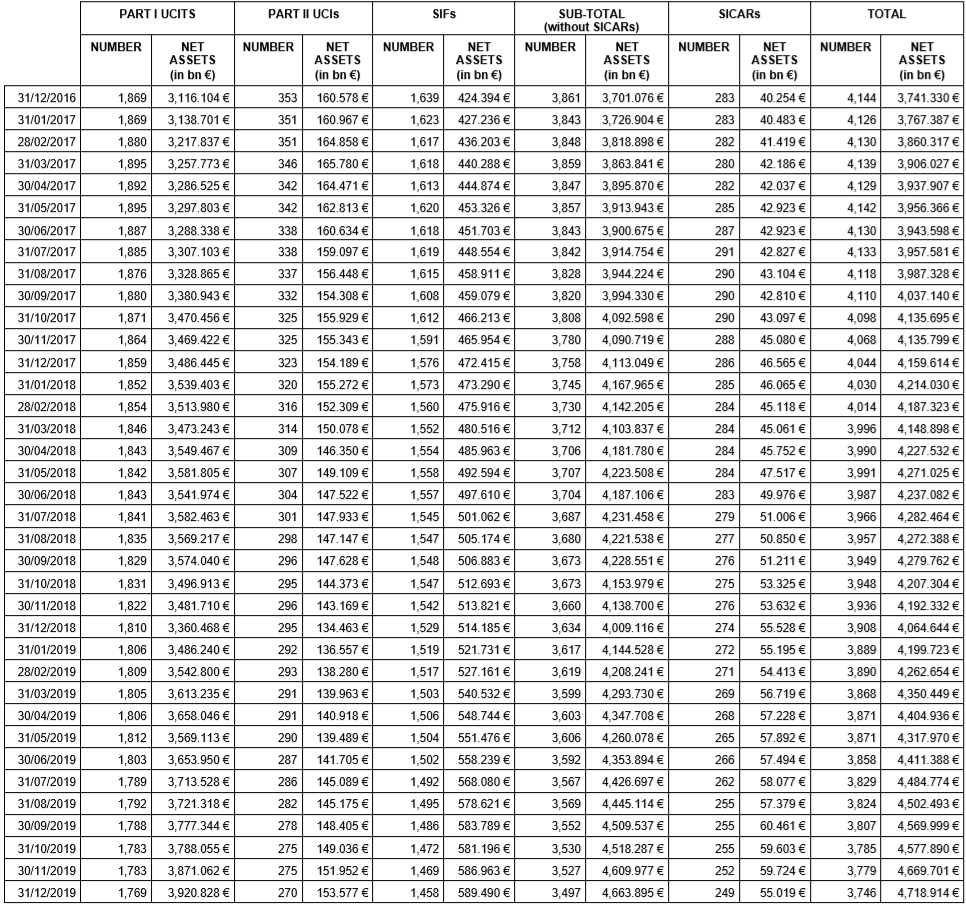 The following 42 undertakings for collective investment have been deregistered from the official list during the month under review:

(1) Undertaking for collective investment for which the designated management company was authorised by the competent authorities of another Member State in accordance with Directive 2009/65/EC.