In 2020, the CSSF’s “UCI On-site Inspection” department carried out a thematic review in relation to Regulation (EU) 2016/1011 of 8 June 2016 (“Benchmarks Regulation” or “BMR”). The BMR was published in the European Official Journal on 29 June 2016 and has applied since 1 January 2018. It defines a common framework to ensure the accuracy and integrity of the indices used as benchmarks in financial instruments and financial contracts, or to measure the performance of investment funds in the EU.

Overall, we observed a low level of BMR compliance among the inspected entities. This was most prominent in the required prospectus disclosures of UCITS funds in relation to the ESMA Register, which were found to be often missing, incorrect or incomplete.

Further details on the focus areas of the thematic review are described below.

IFMs may use a benchmark or a combination thereof if the benchmark is provided by an administrator listed in the ESMA Register, or is a benchmark which is included in the register.2

Consequently, controls must be implemented to ensure that benchmarks used are included in the ESMA Register. We noted that controls put in place by the IFMs varied from no controls in one case, to controls on an annual basis, to monthly and daily controls. We consider annual controls as insufficient to ensure effective monitoring of the ESMA Register.

Article 28 (2) of the BMR requires benchmark users to “produce and maintain robust written plans setting out the actions that they would take in the event that a benchmark materially changes or ceases to be provided.”

The content of the contingency plans was largely satisfactory, albeit with varying level of detail. We would like to refer to the ESMA Q&A on the BMR3 for guidance.

Article 28 (2) of the BMR further specifies that contingency plans shall define alternative benchmarks where “feasible and appropriate” to substitute the original benchmark when it is no longer available. In cases where IFMs decided to not define alternative benchmarks, this decision was often not formalised by outlining the reasons and obtaining Board approval. For reasons of good corporate governance, this decision should be explained and approved by the management body/governing body of the IFM.

UCITS prospectuses must include clear information stating whether the benchmark is provided by an administrator included in the ESMA Register. This information was found to be missing, incorrect or incomplete in more than half of all reviewed prospectuses and concerned all IFMs in the sample. 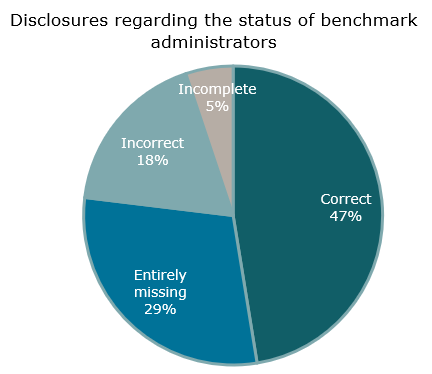 Prospectuses should also reflect benchmark contingency plans or indicate how investors can access them. However, this information was missing in almost one third of the prospectuses reviewed.

2 The transitional period for third country benchmarks that are not listed in the ESMA Register has been extended to 31 December 2023.