The Luxembourg UCI industry thus registered a negative variation amounting to EUR 45.925 billion in September. This decrease represents the sum of positive net capital investments of EUR 11.262 billion (+0.20%) and of the negative development of financial markets amounting to EUR 57.187 billion (-1.01%). 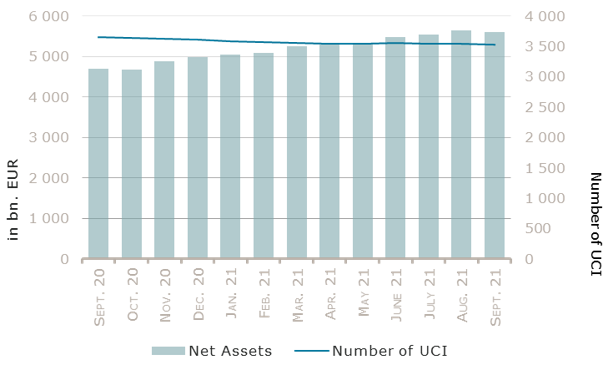 The number of undertakings for collective investment (UCIs) taken into consideration totalled 3,532, against 3,539 the previous month. A total of 2,321 entities adopted an umbrella structure representing 13,263 sub-funds. Adding the 1,211 entities with a traditional UCI structure to that figure, a total of 14,474 fund units were active in the financial centre.

With regard to developed markets, the European equity UCI category registered a negative performance amid declining leading economic indicators, continuing supply chain bottlenecks and a higher inflation, this despite the beginning of the NGEU (Next Generation EU) transfers and the continuation of the accommodative monetary policy by the European Central Bank (ECB). The deceleration of the US growth, supply chain problems, a persistent sharp increase of inflation and the announcement of a possible tapering by the Federal Reserve (FED) weighted on US equity markets, causing the US equity UCI category, notwithstanding a strong appreciation of the USD against the EUR, to end the month with a loss. Expectations of a political change in Japan in the near future supported the Japanese equity UCI category.

On both sides of the Atlantic, concerns around higher inflation caused long-term government bond yields to increase in September (i.e. bond prices increased).

The EUR denominated bond UCI category closed in negative territory amid rising yields on highly rated EUR denominated bonds. Considering the increase in inflation in Europe as a temporary movement, the ECB announced continuing its accommodative monetary policy for avoiding a tightening of financial conditions.

Highly rated USD denominated bonds, against the background of the sharp rise in inflation in the United States, also registered rising yields. As a result, the FED signaled a possible beginning of its tapering program in a short-term future.  On the budgetary side, the Congress is still looking for a solution to avoid a shutdown. Spreads of investment grade corporate bonds were not significantly impacted by economic developments in September. Overall, despite a significant appreciation of the USD against the EUR, the USD denominated bond UCI category realised a negative performance. 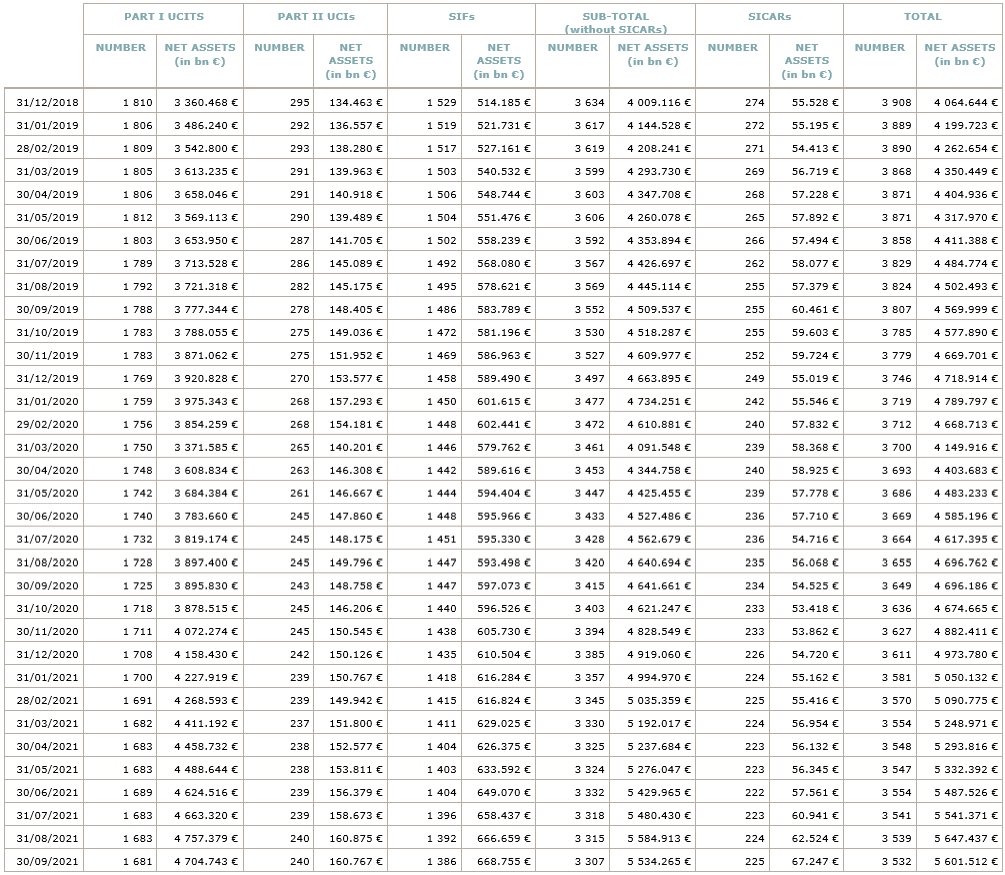 During the month under review, the following thirteen undertakings for collective investment have been registered on the official list:

The following twenty undertakings for collective investment have been deregistered from the official list during the month under review: