The Luxembourg UCI industry thus registered a negative variation amounting to EUR 109.255 billion in May. This decrease represents the sum of negative net capital investments of EUR 17.346 billion (-0.32%) and of the negative development of financial markets amounting to EUR 91.909 billion (-1.68%).

The number of undertakings for collective investment (UCIs) taken into consideration totalled 3,443, against 3,454 the previous month. A total of 2,256 entities adopted an umbrella structure representing 13,205 sub-funds. Adding the 1,187 entities with a traditional UCI structure to that figure, a total of 14,392 fund units were active in the financial centre.

As regards the impact of financial markets on the main categories of undertakings for collective investment and the net capital investment in these UCIs, the following can be said for the month of May.

The financial market activity was weakened by the persistence of the inflation tensions, the continuing Ukraine crisis, the Chinese lockdown policy and its impact on supply chains.

Concerning developed markets, the European equity UCI category registered a negative performance, reflecting the fall-back of most confidence indicators, the uncertainty associated to the still rising inflation, the potential consequences of the European partial ban on imports of Russian oil. The US equity UCI category similarly receded, due to the decline in consumer confidence, a deceleration of the activity in both industry and services, and to record inflation. The Japanese equity UCI category, on the basis of positive corporate results recorded a slightly positive performance which was offset by the depreciation of the JPY against the EUR.

As for emerging countries, the Asian equity UCI category overall realised a negative performance in May in consequence of market decline in India, Indonesia, Malaysia and Singapore, despite the positive market performances in China and South Korea in a context of progressive easing of the COVID-19 restrictions.

The Eastern European equity UCI category realised a negative performance due to the lasting Ukraine crisis and due to the negative performance of some equity markets, like Hungary and despite the positive market performances in Poland and Czech Republic, and the appreciation of the Russian rouble of about 10%. The Latin American equity UCI category was the best-performing equity category in May, driven in Brazil, Peru, Chile mainly by currency appreciation and commodity export revenues.

Development of equity UCIs during the month of May 2022*

Although the inflation figures remained high and the monetary policy stances got relatively hawkish on both sides of the Atlantic, we could observe in May some divergence in the evolution of the yields: further rising in Europe, declining in the US.

Concerning the EUR denominated bond UCI category, government bond yields rose as the ECB confirmed that QE net purchases are likely to end in the third quarter, allowing a rate hike in July, in line with forward guidance. As for corporate markets, European Investment Grade bonds declined and the EUR denominated bond UCI category in May overall registered a negative performance.

Concerning the USD denominated bond UCI category, the Federal Reserve (“Fed”) raised its target rate by 50bp at 1 percent and announced that the downsizing of its balance sheet would start as from June. As this rate hike was to some extent anticipated by the markets, and given the deceleration of the activity, the bond price increased (the yields decreased). Overall, due to the depreciation of the USD against the EUR, the US denominated bond UCI category registered a negative performance.

Development of fixed income UCIs during the month of May 2022* 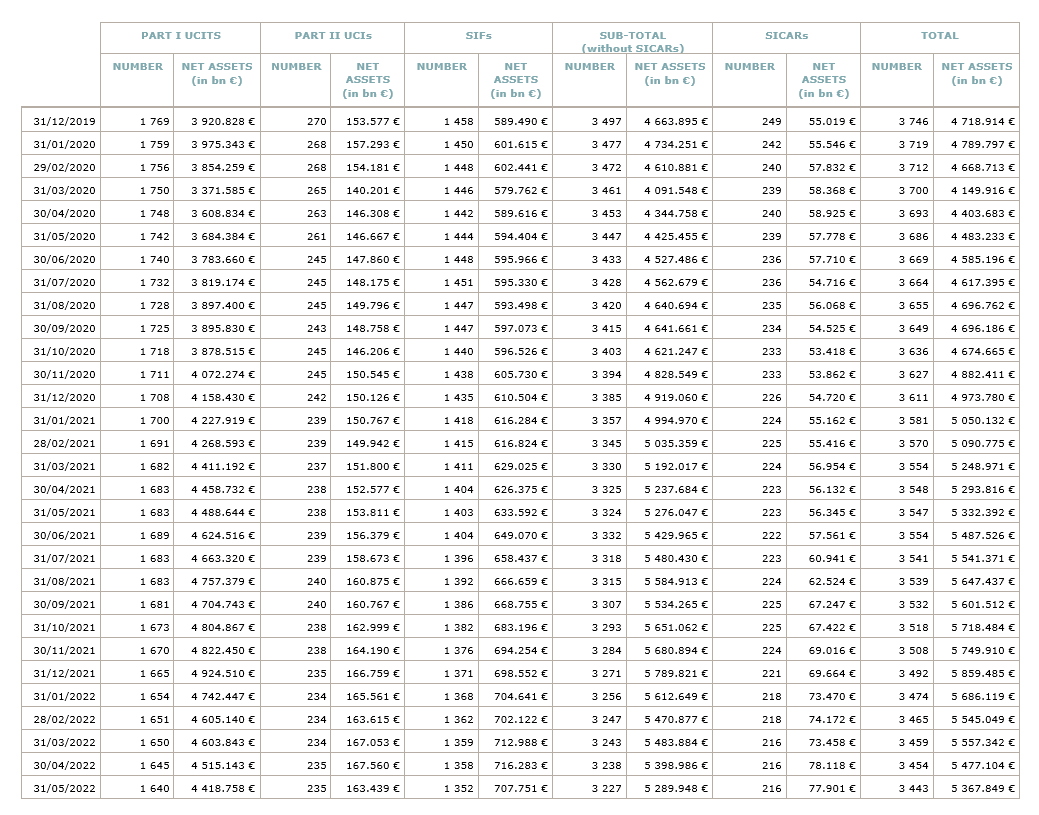