The Luxembourg UCI industry thus registered a negative variation amounting to EUR 78.688 billion in August. This decrease represents the sum of negative net capital investments of EUR 4.281 billion (-0.08%) and of the negative development of financial markets amounting to EUR 74.407 billion (-1.38%). 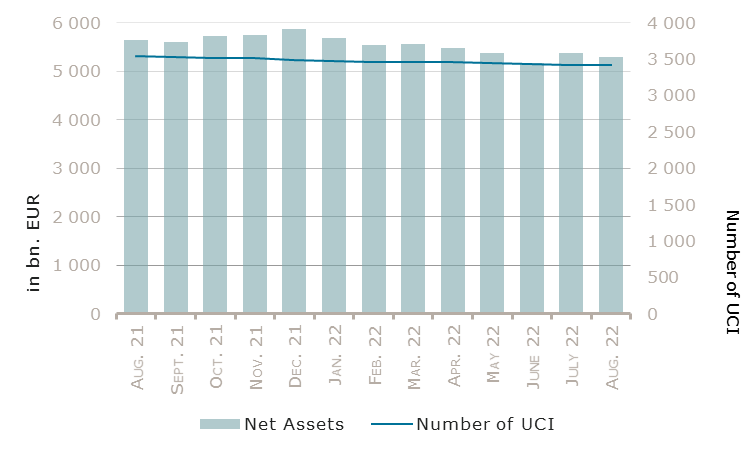 The number of undertakings for collective investment (UCIs) taken into consideration totalled 3,413, against 3,422 the previous month. A total of 2,230 entities adopted an umbrella structure representing 13,165 sub-funds. Adding the 1,183 entities with a traditional UCI structure to that figure, a total of 14,348 fund units were active in the financial centre.

As regards the impact of financial markets on the main categories of undertakings for collective investment and the net capital investment in these UCIs, the following can be said for the month of August.

At a global level, the main markets remained volatile. Central banks reaffirmed their determination to bring inflation under control at the cost of downward growth expectation, while the geopolitical tensions around the globe remain elevated.

Concerning developed markets, the European equity UCI category underperformed the main regions with a decrease in August reflecting the high level of inflation, the deterioration of most market indicators, the Ukraine war impact on the energy sector and concerns over the global economy cool down. The US equity UCI category also registered a negative performance as US activity is slowing down and core inflation remains high, keeping the Fed on an aggressive monetary policy stance. The Japanese equity market recorded a positive performance in local currency but negative in euros once reflected the depreciation of the yen.

As for emerging countries, the Asian equity UCI category saw a small increase in August. Gains from India and Indonesia were offset by other countries decline, including South Korea and Singapore, amid concerns over the pursue of the global efforts against soaring inflation. The Chinese equity market remained flat, muted on the one side by the weakening of the domestic demand, the softness of the manufacturing activity, the zero-COVID policy, the weakness of the housing market, and supported on the other side by accommodative fiscal and monetary policies. The Eastern European equity UCI category realised a negative performance due to the uncertainties surrounding the Ukraine crisis and the energy supply for the coming winter. The Latin American equity UCI category outperformed the rest of the market, boosted by Brazil and Chile markets.

Development of equity UCIs during the month of August 2022*

In Europe, bond yields sharply rose in August, pushed by expectations of central bank rate hikes and comments from ECB’s board members indicating that monetary policy would need to remain tight for an extended period. In this context of dampened overall sentiment, bond prices, which move inversely to yields, made the EUR denominated bond UCI category globally decline.

Similarly to the EUR denominated bond category, the yields of the USD bond category also increased (i.e. bond prices fell) following the Jackson Hole conference where central bankers reaffirmed their hawkish stance and reiterated the current prioritisation of prices stability over economy’s recessionary issues. The USD denominated bond category however benefitted from a positive conversion factor of the US Dollar against Euro that smoothed the negative impact.

Development of fixed income UCIs during the month of August 2022* 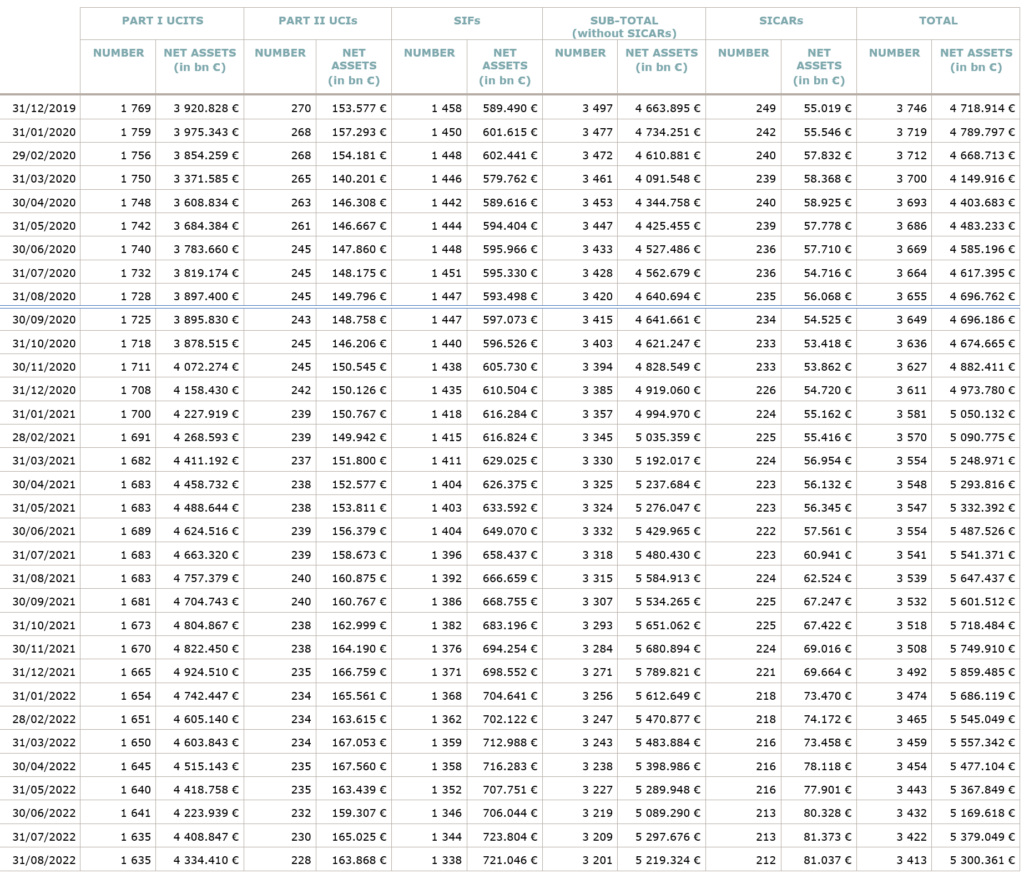